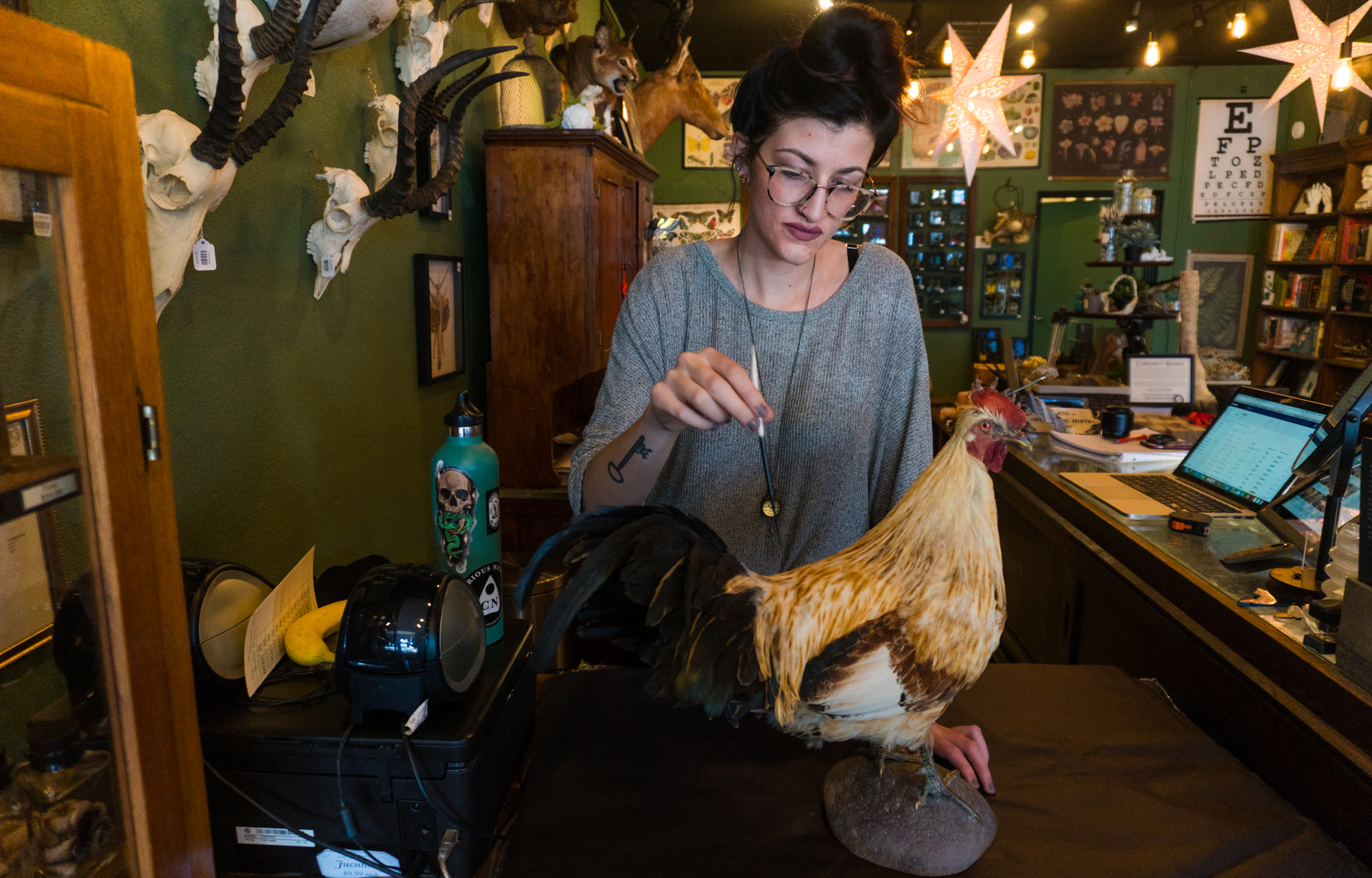 PHOENIX – Heather Grimes is a 24-year-old vegan who enjoys painting, making jewelry and playing in a band. She’s also a taxidermist.

Grimes isn’t alone in her interest for the art of preserving, posing and mounting dead animals for posterity.

Robert Mead, president of the Arizona Taxidermy Association, said he has seen an increase in women in taxidermy, traditionally a male-dominated industry. Women taxidermists now are competing in championship shows with their own works of art.

“There’s a lot of artistic processes that go on for taxidermy,’ he said, “and it’s kind of refreshing to bring new ideas. A lot of times the women are the ones that bring those ideas. It’s good for the industry.”

Taxidermy is a hobby for some; others make it their business. 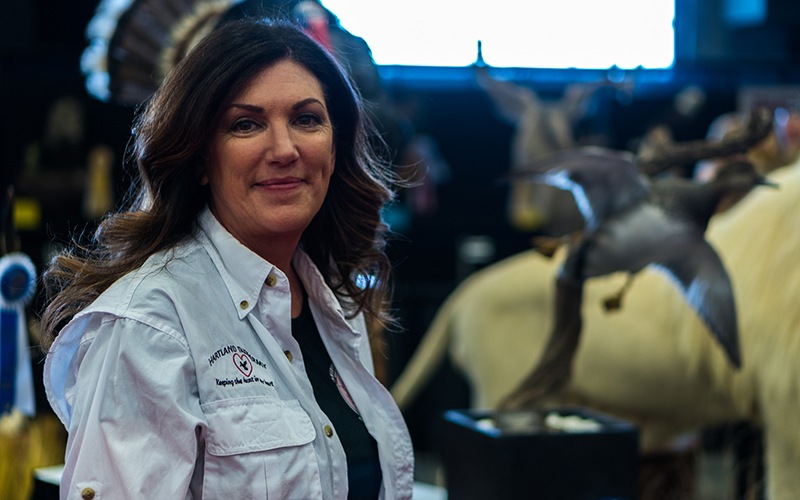 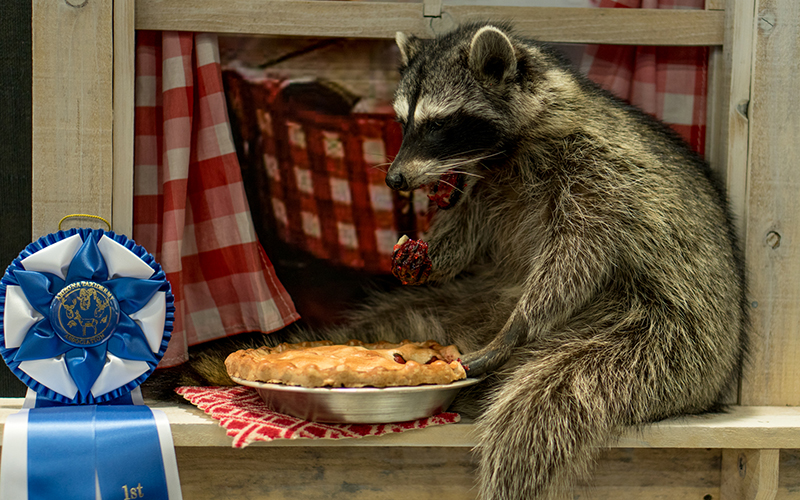 Many taxidermists find creative ways to decorate or pose a mount, as in this pie-loving raccoon display at the Arizona Taxidermy State Championship. (Photo by Daria Kadovik/Cronkite News)

Christine Hartland owns Hartland Taxidermy in Phoenix. The bio on her website says, “I’m not your average taxidermist. I don’t wear camo everyday, and I’m not a man. My dad isn’t a taxidermist, and neither is my husband. I am an artist combining my painting skills with my lifelong love of science and nature.”

Hartland said taxidermy is not just “an old guy thing anymore.” With their attention to detail, women seem to be better at it than men are, she said, adding that at a competition last year, she heard one of the men had used eyeshadow to add color to his bird mount.

“For somebody who wears eyeshadow every day, you’re like, ‘No kidding, I know how this works,'” she said.

Using makeup is permitted and taxidermists find creative ways to make their mounts look as natural as possible, including using clear nail polish to make the eyes glossy or fake eyelashes to imitate hair. The process is time-intensive and requires a great deal of practice to do well.

“It is very difficult,” Grimes said. “But I think it’s really cool to take something that’s dead and then recreate it and make it look alive again.”

Taxidermists typically preserve and mount animals that were killed by hunters, but others use what they consider more sustainable and ethical sources for their carcasses. Grimes said she does not support trophy hunting and only works with animals that have died naturally from sickness or old age.

“That’s not something I want to delve into as much,” she said of preserving hunted animals. “I like more naturally dead things that are just already there that otherwise would get thrown away or rot.”

She focuses primarily on bird taxidermy and gets her specimens from a breeder who sends her animals when they die of natural causes.

Grimes works at Curious Nature, a “fine science and natural history emporium for all things fantastic and strange,” according to their website. The shop offers their customers everything from taxidermy, skulls and bones and other unique collectibles. The store only sells ethically sourced specimens and vintage taxidermy that is at least 10 years old. 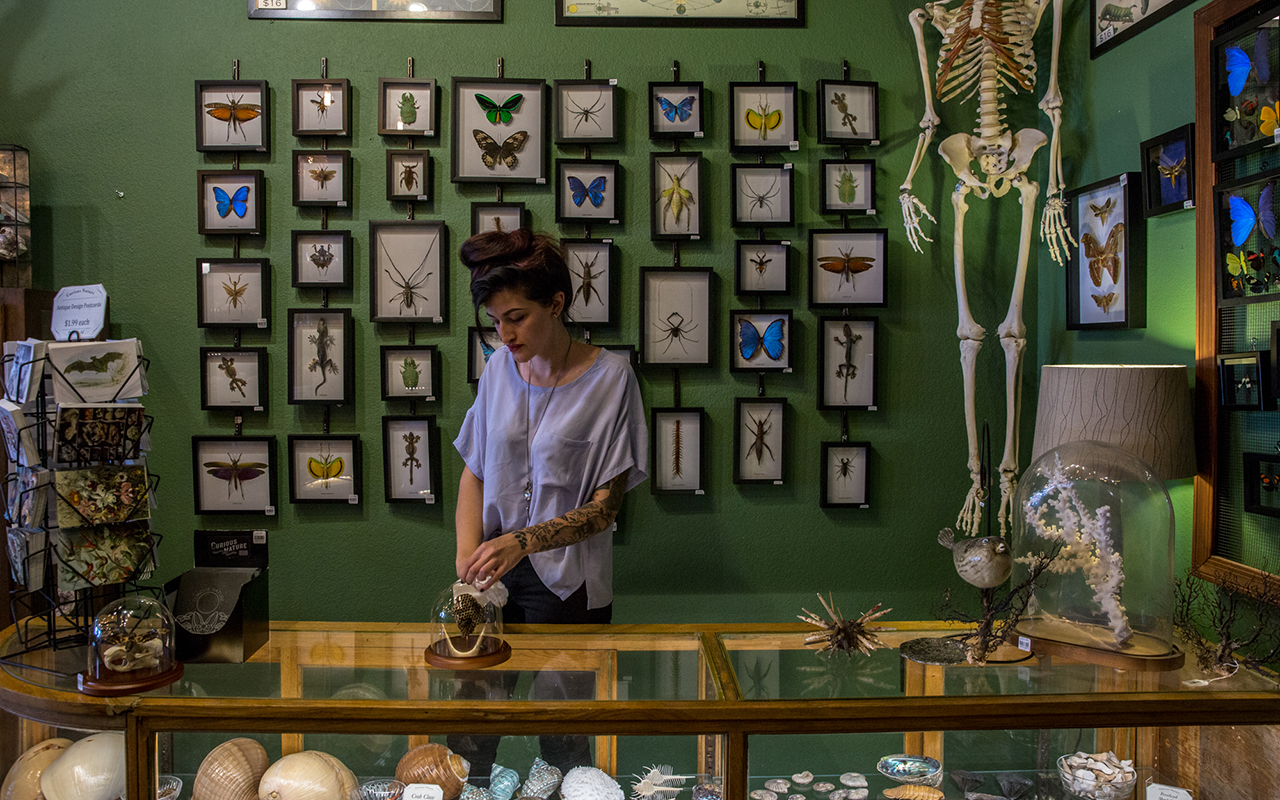 Heather Grimes, 24, plays in a band, paints, sings and makes jewelry. For her, taxidermy is a way to branch out artistically. “I think it’s just important to be able to see it,” she said. “It kind of gives people a renewed sense of appreciation for nature.” (Photo by Daria Kadovik/Cronkite News) 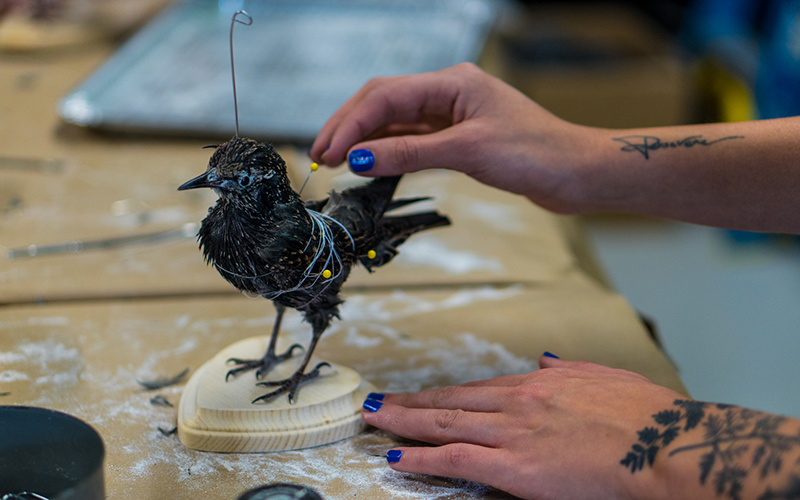 Grimes carefully pins and wraps her starling mount so it can dry in the right position over the next few weeks. (Photo by Daria Kadovik/Cronkite News) 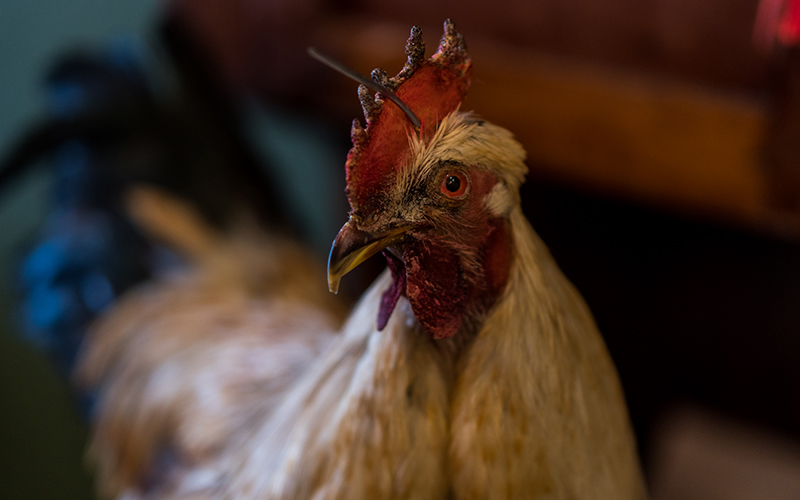 Grimes usually uses animals that have died of natural causes. This chicken died of old age, she said. (Photo by Daria Kadovik/Cronkite News)

“We receive donated dead animals and insects from local pet shops, rehabilitation centers, and the herpetology center in Phoenix,” the shop’s website states. “We try to recycle and reuse as much of an animal as possible and commemorate it after death as a way of paying tribute, so to speak.”

The shop also offers taxidermy classes. During a recent session, participants were given all the materials and instruction necessary to make a “jackalope,” a fictional creature from American folklore, which is made by attaching antlers to a rabbit’s head.

Of the eight people who took the class, six were young women.

“Our parents think we are crazy,” said Averie Elias, 24, as she and her husband, Nicholas, carefully removed all the flesh from the skin of a white rabbit. Under the keen supervision of taxidermists Doug and Suzi James, the students learned about the entire process, from skinning the animal to placing it on a wooden plaque.

“Do the horns go in front or behind the ears?” Doug James asked the class. “That’s up to you.”

During a taxidermy class at the Curious Nature shop in Phoenix, students were given instruction and all the necessary supplies to make a mythical jackalope. Mounts usually are filled with stuffing or fitted onto foam forms. (Photo by Daria Kadovik/Cronkite News)

Instructor Doug James (left) shows Hailey Ingols, 24, who came to Phoenix from Flagstaff for the class, how to remove as much flesh as possible from a rabbit to avoid rotting. (Photo by Daria Kadovik/Cronkite News)

Borax, a laundry detergent, helps skin peel away from the carcass and acts as a drying agent. (Photo by Daria Kadovik/Cronkite News)

Avery McRae, 24, a nurse, suggests adding eyeglasses and a pipe to make her jackalope funny. (Photo by Daria Kadovik/Cronkite News)

Sami Drake, 25, applies adhesive to her jackalope form during the class. Instructor Doug James said it's important to apply a generous amount so the hide sticks to it well. (Photo by Daria Kadovik/Cronkite News)

After applying adhesive, the student taxidermists slide their rabbit hides over the formd, adjust them and fit fake eyes through the holes. (Photo by Daria Kadovik/Cronkite News)

To make the hide stay on the foam form, taxidermists use adhesive paste that can be purchased at any home improvement store. Weaker adhesives allow for tweaking the mount slightly for a few days after finishing it. (Photo by Daria Kadovik/Cronkite News)

The last step after attaching the antlers is to tuck extra fur underneath and mount the animal onto a wooden plaque. (Photo by Daria Kadovik/Cronkite News)

Sami Drake, 25, brought her own frame and decorations for her jackalope mount. Taxidermists use pins, cardboard and wooden sticks to hold the mount in place. It can take more than two weeks for it to dry completely and stay in the desired shape. (Photo by Daria Kadovik/Cronkite News)

Patience and being able to take constructive criticism are are important when learning taxidermy, Grimes said, and there’s always room for improvement when a mount is finished.

“You can’t just like read about it and study it and then do it perfectly. You have to just go and do it. And then if you mess up, then you learn along the way,” Grimes said.

Suzi James said she picked up taxidermy after watching her husband do it for years. She was always interested and wanted to see if she could do it. This year, she entered some of her work in the Arizona Taxidermy State Championship for the first time, and three of her pieces took first and second places in the novice division.

“When I first started doing it, I was a little nervous. I didn’t think I would win,” she said. “But when I got first place, I was happy that my hard work paid off.”

Grimes said the challenges of taxidermy feel especially worthwhile when she shows people something they might not have seen before. She strives to instill a renewed sense of appreciation for nature.

“I see a lot of kids, and their faces just light up when they see all the stuff,” she said. “They can touch it and be super close to it. It is fun to to educate people about that kind of thing, too.”