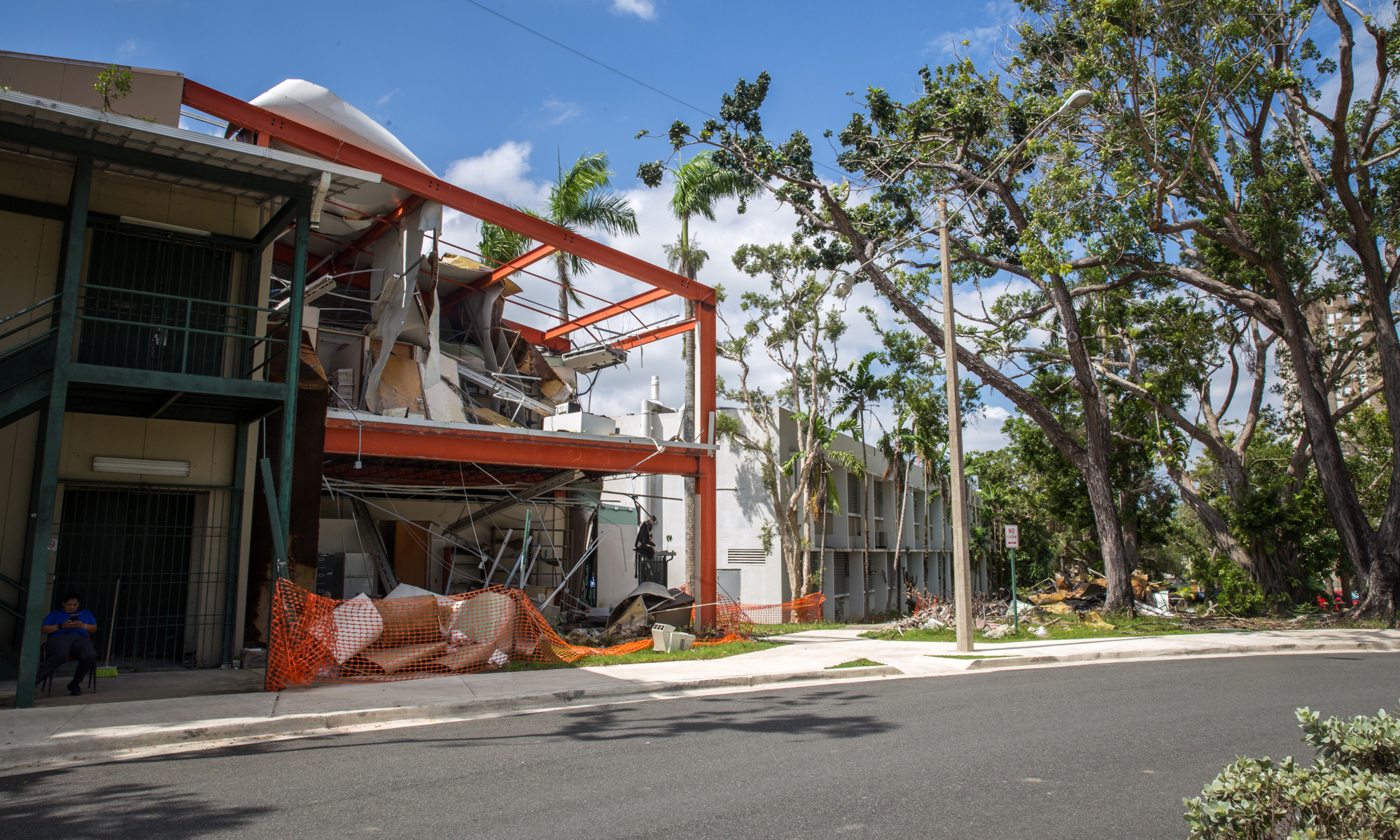 By Claire Cleveland/Cronkite Borderlands Project | May 4, 2018

SAN JUAN, Puerto Rico – Seven months after Hurricane Maria tore through this island, some of the equipment in neuroscience researcher Manuel Diaz Rios’ lab still is being repaired and replaced.

But more noticeably, Diaz is missing something else – his two Ph.D. students. After the storm, they decided to complete their studies and thesis projects at universities on the mainland.

Puerto Rico has lost more than 135,000 people to the mainland since Maria, according to the Center for Puerto Rican Studies at Hunter College in New York. Moreover, the researchers projected that as many as 470,000 Puerto Ricans – 14 percent of the population – could leave the island from 2017 through 2019.

The exodus of doctors, scientists and other college educated professionals is only one part of the problem. Recovery from the storm has been plodding, magnifying the island’s brain drain, but Puerto Rico already was facing a mass exodus and a fiscal crisis that began in 2005, a year before the U.S. economic downtown. The island faced more than $70 billion in debt and more than $50 billion in pension obligations even before Maria’s devastation.

Damages to University of Puerto Rico’s 11 campuses from the Sept. 20, 2017, hurricane totaled more than $133 million, most of which the university system hopes to recover through insurance payments. Still, the funding picture remains bleak: In the next five years, the campuses will lose nearly $250 million in government funding after a like-size cut during the 2017-18 school year.

More than 60,000 students are pursuing degrees in 452 programs, including 40 at the doctorate level, and at a medical school and a law school.

The challenges facing “La Yupi,” as the university system is affectionately known in Puerto Rico, are personified in Diaz’s neuroscience doctoral students.

One of them, Ernesto Cabeza Bou, left weeks before the hurricane to do summer research with Yale University at the Marine Biological Laboratory in Woods Hole, Massachusetts. It was an incredible opportunity for him, one that Diaz was excited for, too.

But the hurricane destroyed Diaz’s lab as well as his home, so it didn’t make sense for Cabeza to return. Diaz made an arrangement with Cabeza’s supervisor at Yale so the he could stay to finish his Ph.D. Diaz’s other student, who was pursuing an M.D.-Ph.D. – a doctorate degree in both medicine and research – left for the States because of financial and family reasons. 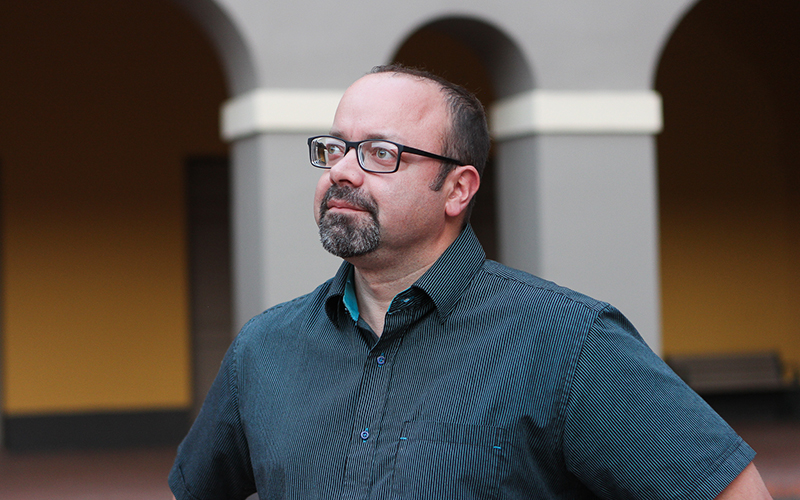 Neuroscience researcher Manuel Diaz Rios’ Lab at the University of Puerto Rico, Rio Piedras, was destroyed by Hurricane Maria and his Ph.D. students decided to complete their studies in the mainland United States. (Photo by Claire Cleveland/Cronkite Borderlands Project)

“Moving forward as a scientist and as a Puerto Rican, I’m worried.” Diaz said. “We have a very strong, talented, core of students here. They are coveted in the States, they are taken by the bunches. We will keep a good core, but now that’s also in peril because of the slow recovery process. So moving forward, that has to be a big priority for the government, for entities here, and for our collaborators abroad.”

Cabeza-Bou will finish his Ph.D. at Yale. He’s in his third year. His research is focused on the neural pathways in C. elegans, tiny non-parasitic worms that live in the soil, and how those neurons help the animal navigate in different temperatures.

Last summer, he was accepted into the Marine Biological Laboratory neuroscience course, one of the most prestigious in his field. During his time in Massachusetts, he impressed one of course directors, Daniel Colon-Ramos, a professor at Yale and a fellow Puerto Rican.

“I was able to get to this course with the best neuroscientists in the world,” Cabeza-Bou said by telephone. “I really felt like Puerto Rico prepared me to be there and give my best.”

Cabeza-Bou’s work earned him a post-course research award at the end of the summer term, just three weeks before Maria hit, extending his stay at Yale for two months to continue his research. Colon-Ramos was his mentor at Yale, and the one who agreed to let him stay when it became clear that returning to a devastated Puerto Rico would significantly delay Cabeza-Bou’s work.

The brain drain on the island worries Cabeza-Bou. But he notes there are ways to help the island without physically being there. His mentor at Yale, Colon-Ramos, is an example of that.

“There’s no power, there’s no stability,” he said. “It leaves scientists and professionals with no options. The ones that have the opportunity to leave, even if they don’t want to, they have to because they have things to keep going. … The most valuable thing that they are missing is time, you can’t take that back. You can buy those microscopes again, but time is something they are losing.”

From outside Puerto Rico, Cabeza-Bou will continue his research in the hopes his work will make a difference and he’ll get to help Puerto Rico.
But that choice comes with a cost.

In addition to his students leaving, the hurricane damaged his home, which he acknowledged made it hard to focus on his work. The slow recovery – weeks without power, Wi-Fi shortages and his lab being in shambles – meant the impact from the storm has been more than professional.

“As scientist I just couldn’t focus. I couldn’t think about the proposals I had already submitted, papers I had to write and submit myself,” Diaz said. “I know for a fact as a scientist that many of us have some (post-traumatic stress disorder) going on.”

In March, there were power outages in San Juan that lasted six hours and brought him back to September 2017, Diaz said. In April, there was the first island-wide power outage since the hurricane.

Even before these recent power outages, Diaz was considering whether he, too, should join the exodus.

“I was close to a breaking point. I was going to start looking abroad,” Diaz said. “I couldn’t think as a scientist – I was thinking as a father, as a son, as a grandchild, as a neighbor.”

But Diaz knew he needed to stay.

Those opportunities, however, are becoming more scarce. The island is facing with $120 billion in debt and is on the brink of bankruptcy while the unemployment rate is 10 percent, more than twice that on the mainland, and about 45 percent of islanders live in poverty.

Before the 2017-18 school year, the university system received about 90 percent of its $1.4 billion budget from the central government. The island has been in the midst of a fiscal crisis since 2006. Because of the crisis, Puerto Rico is under the supervision of the Financial Oversight and Management Board for Puerto Rico, PROMESA, which was appointed by President Barack Obama in 2016.

The federally appointed seven-member panel is tasked with working with the government of Puerto Rico to get the island’s debt paid down. PROMESA requires the governor to submit budget proposals aimed at tackling the debt. UPR creates its own budget and submits this proposal separately to the board. The budget for the next five years was approved on April 20 with the $250 million cut. 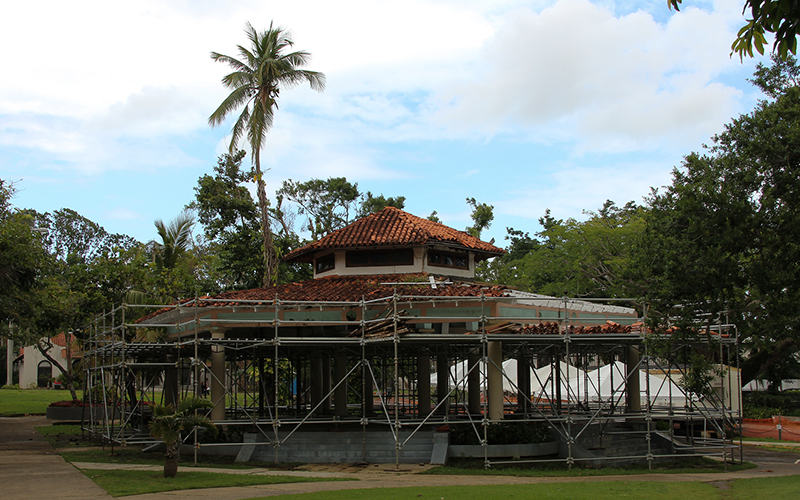 A meeting place for students on the University of Puerto Rico Rio Piedras campus is getting its roof repaired months after hurricane Maria struck Puerto Rico. (Photo by Claire Cleveland/Cronkite Borderlands Project) 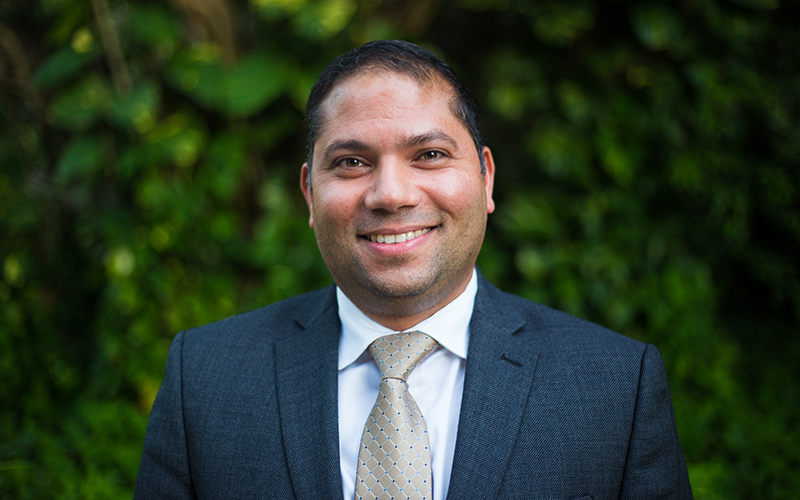 Walter Alomar Jimenez, chairman of the governing board of the University of Puerto Rico, said the strained system has to be frugal. (Photo by Lerman Montoya/Cronkite Borderlands Project)

“We have to generate some income for the university; we have to be frugal because 80 percent of the budget was received from the central government,” said Walter Alomar Jimenez, chairman of the University of Puerto Rico governing board. “We have not been able to do things to generate income, like bringing more out of state students to charge out of state tuition, online courses, more continuing education, merchandising, and housing. So there’s a lot of potential that we have not been doing.”

The hurricane damage was most devastating to the university system’s three largest campuses: Mayaguez, Rio Piedras and Humacao. The system’s $100 million insurance policy, which will cover most of the repairs, still won’t be enough to cover all $133 million in damages. The rest will have to be fixed using funds the system had set aside for other projects.

“We have a fund for improvements, $60 to 70 million in budget, so we are gonna start using the money for the recovery,” Alomar said. “We are not going to wait for the insurance to cover it in full, because we know it is a process. We are gonna start using our reserved money to start putting the buildings back into place, so obviously the laboratories and the research are gonna be a priority in that rebuilding and reconstruction.”

Alomar is optimistic about the university system’s ability to recover from the budget cuts. He noted that they’ve already had to deal with a $251 million decrease in the 2017-18 school year. “We’re halfway there,” he said.

Across the island, at the Mayaguez campus, which serves 13,000 students, Ubaldo Cordova, who serves as the special assistant to the chancellor for research, innovation and creative endeavors, is trying to find ways to deal with the upcoming budget cuts on his campus.

“There is a lot of conversations on the island about how to improve the economy, what is the economic development plan,” Cordova said. “But the university has to be in the center of that, because most of the action happens because of innovations and solutions that come from the university.”

Cordova noted that for an increase in tuition to make an impact on the budget, the university system must increase its enrollment, but after the hurricane, enrollment at the system dropped from 61,748 in 2017 to 58,402 in 2018.

He sees research and innovation as the answer.

“In this historical moment in Puerto Rico and in the university, this is the first time where they are looking at increasing revenues through research and innovation,” Cordova said. “And this is probably the only hope that we have – that research could be seriously considered moving forward as a way to balance our budget, because right now most of the attention is in tuition and more fees, but we need to see these other areas as an opportunity to be more balanced.”