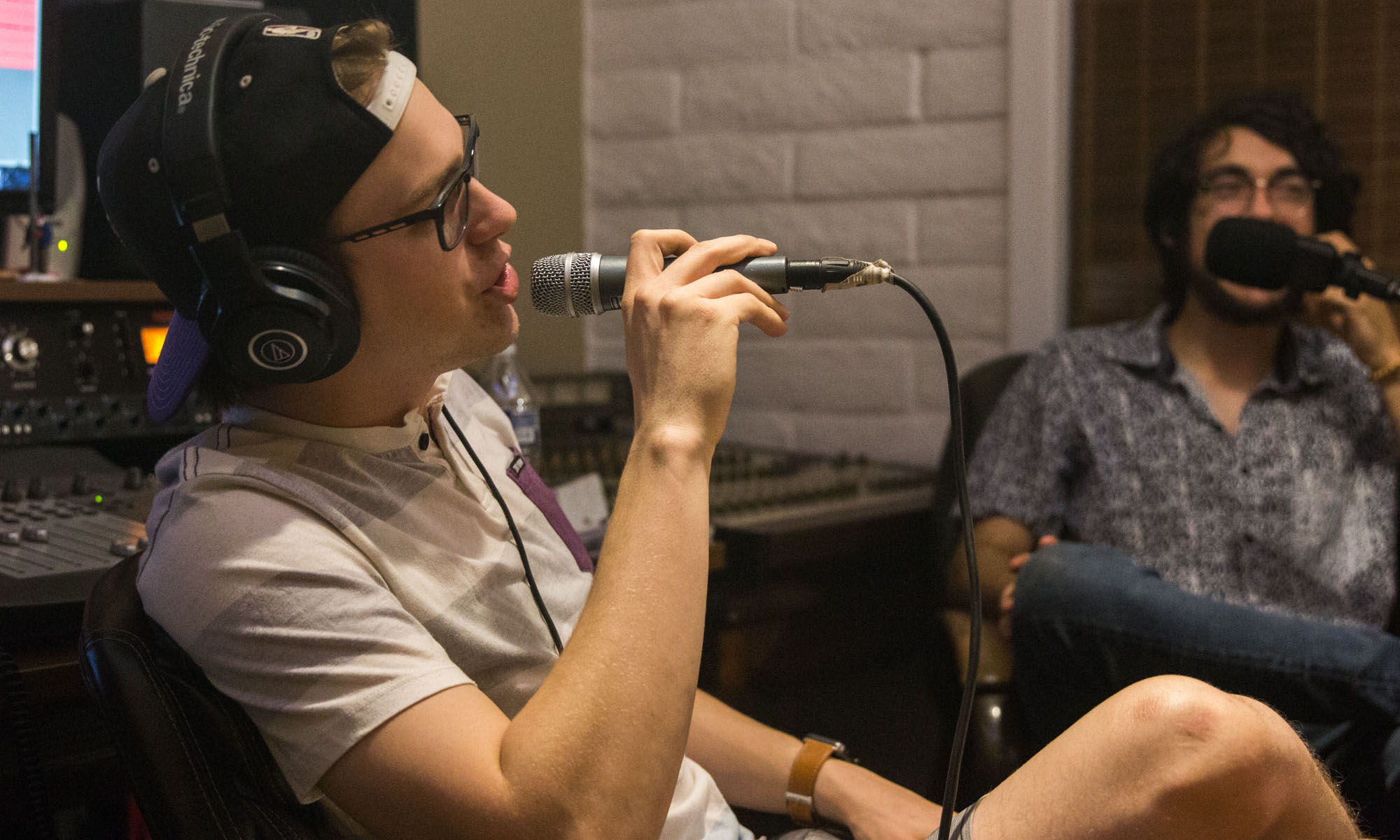 MESA – “Oh, cool, is this our room?” Kevrie Howard, lead singer and bassist of local band Fear and Love, asked with a laugh.

He’s looking around a cramped, former dental-exam room in west Mesa that’s been refurbished to serve as a recording studio. In early April, Fear and Love – Howard, guitarist Rob Dinuto and drummer DJ Breul – stuffed themselves into the space to record a podcast about their music.

The room is stifling – the windows don’t open and there’s no room to walk around, but it didn’t appear to bother friends who’ve known one another for years.

Audio engineer and podcaster Nick Tantillo was thrown a little when his guests arrived earlier than expected to record an episode for his Arizona Music Podcast. The episode is special to Tantillo because he helped the band record its album last year.

“It’s been a long time coming. Since we recorded the album, we’ve been trying to put this together,” Tantillo said. “Let me grab some chairs and get things set up so we can get started.”

Tantillo and the band are about to share their story, but the story of podcasting itself is one of fits and starts. 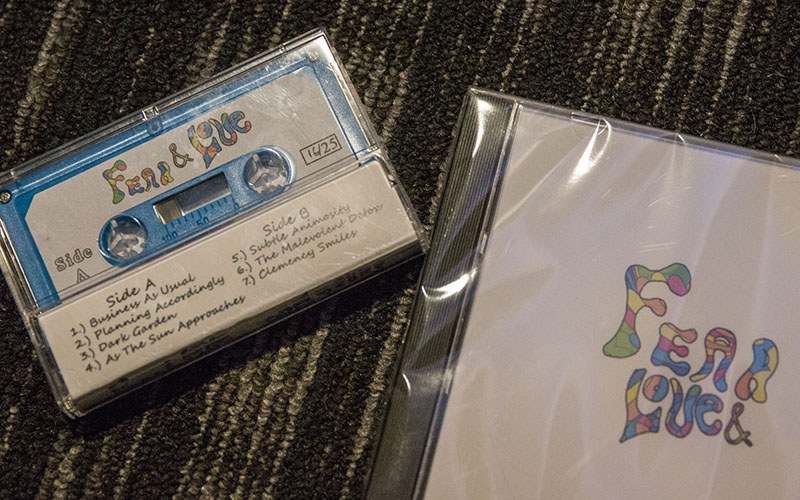 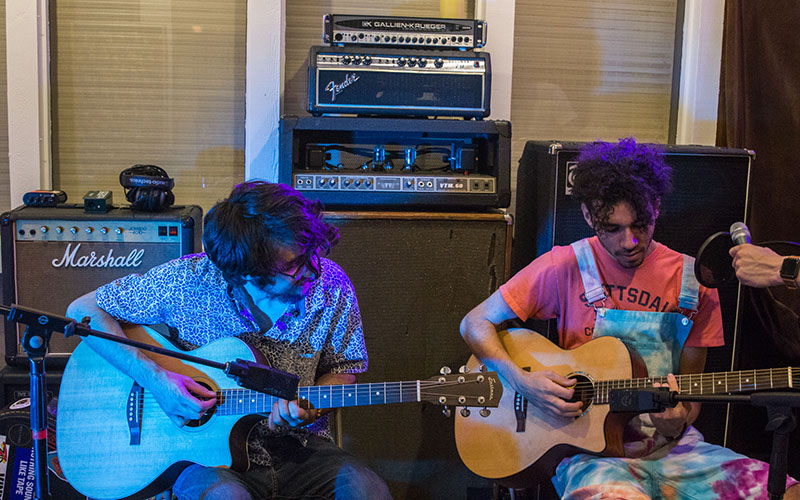 Band members of Fear and Love Rob Dinuto, left, and Kevrie Howard run through their song "Business As Usual" before recording an acoustic session for Arizona Music Podcast. (Photo by Nicole Gimpl/Cronkite News) 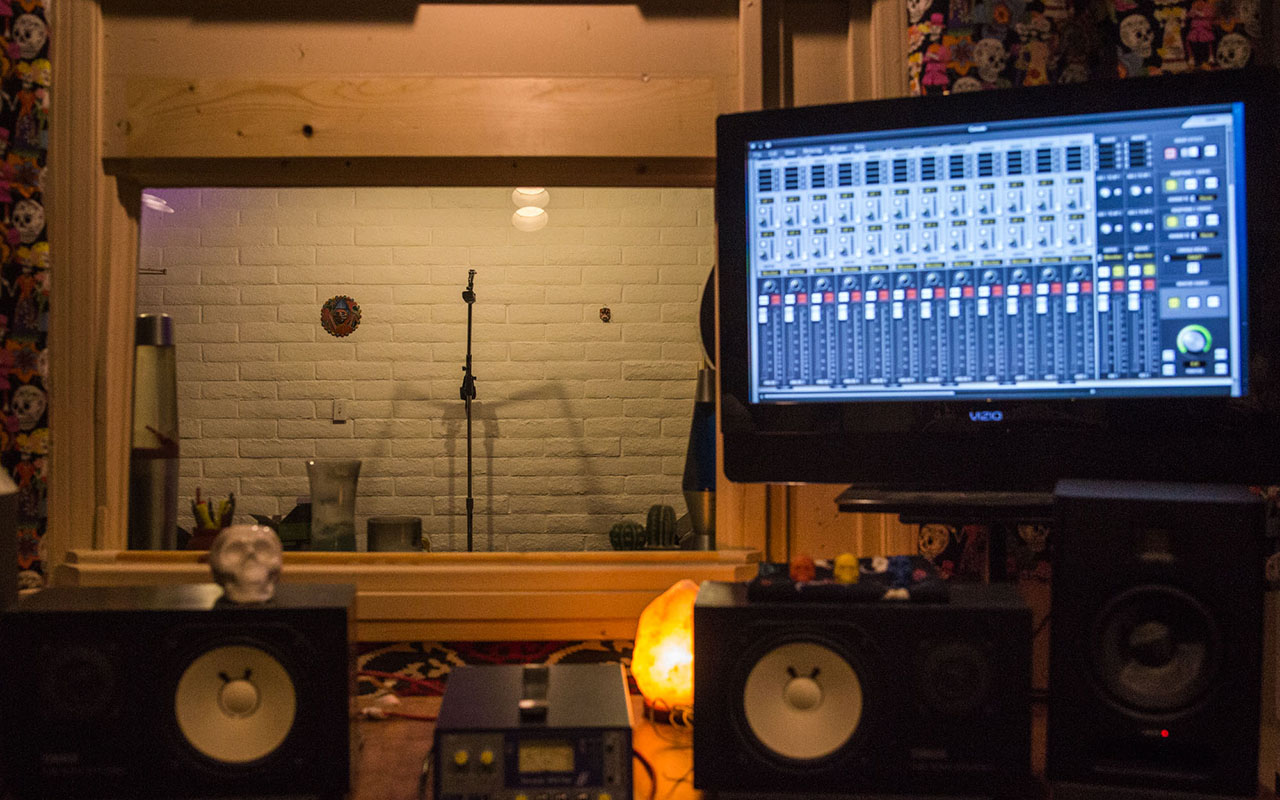 The birth and life of podcasting

Podcasts – music or talk programs made available in digital format for download over the internet – have been around since the early 2000s. Apple first incorporated podcasts into iTunes in 2004. After the iPhone was introduced in 2008, Stitcher and other podcasting apps opened for business.

Over the next six years, podcast visibility and development plateaued. But in 2014 with the release of iOS 8, Apple’s podcast app appeared. That same year, Serial captivated audiences with the story of Adnan Sayed, who had been sentenced to life in prison for a crime he said he didn’t commit. It became the fastest podcast in Apple history to reach 5 million downloads.

According to a 2018 study conducted by Edison Research and Triton Digital, 64 percent of Americans older than 12 are familiar with the term “podcasting,” and 44 percent have listened to a podcast at least once.

“From my experience, I kind of opened a lot of my own friends’ eyes into podcasting,” Cox said. “A lot of people didn’t know what podcasts were. … I still think podcasting is trying to boom and grow, but it’s still the smallest form of media on the internet.”

Small, but moving forward. Such media outlets as NPR and “The New York Times” are transforming reporting into podcasting. MasterCard, Microsoft, Slack and other companies have their own podcasts; in February, McDonald’s created a three-episode podcast.

Although having a large checkbook helps, Cox said, it’s important to remember podcasting doesn’t have to be reserved for companies with big budgets.

“It really depends on what someone wants to do. For me, I spent more towards $1,500 to start my podcast,” he said. “Podcasting can be done 100 percent free.”

Cox says podcasting can be as cheap and easy as using a headset with a microphone to record audio directly on a phone and then uploading it to sound sites, such as SoundCloud. 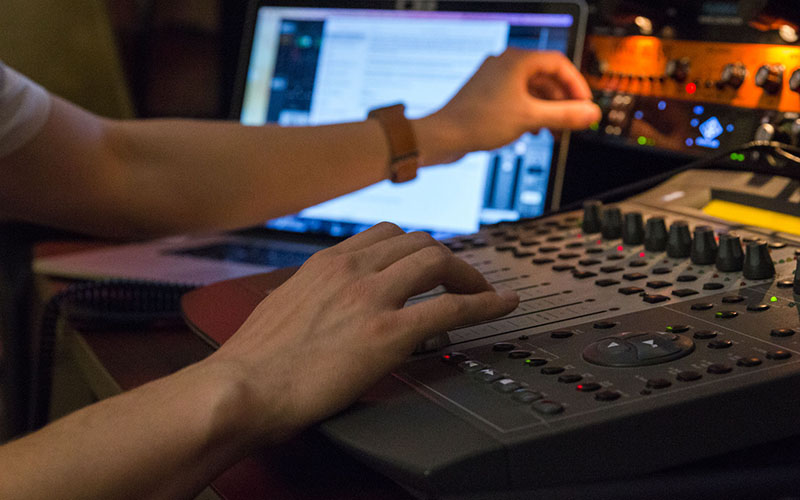 Cox, who began recording episodes of his two podcasts, Millennial in Arizona and Millennial and Marine, in February, said he was greatly influenced by well-known podcaster, stand-up comedian and martial-arts enthusiast Joe Rogan.

“I really wasn’t able to find a decent podcast done by someone my age similar to the Joe Rogan podcast,” Cox said.

In December 2009, soon after the debut of the iPhone, Rogan began podcasting The Joe Rogan Experience. Guests discuss current social topics, such as gun rights and criminal justice, as well as what’s going on in their careers. Over nine years, Rogan has recorded more than 1,000 episodes.

“There’s a lot of podcasts now; they’re so diverse,” Tantillo said. “There’s a lot you can listen to. I don’t listen to a ton of that anymore, but it definitely was what got me started.”

Tantillo, 22, has been fascinated with sound since he attended Horizon High School in north Scottsdale.

“I remember the first time I got a microphone. We had always listened to a lot of music and watched live videos. It’s kind of nerdy, but I was always thought, ‘How am I hearing through the speakers what they’re playing live?’ ”

After graduating from Scottsdale Community College with an associate degree in audio engineering, Tantillo applied his skills to podcasting and soon realized there wasn’t a podcast outlet for local bands and musicians.

“There’s so many people that make good music … but they don’t get talked about. I thought this would be a great niche to jump into,” Tantillo said. 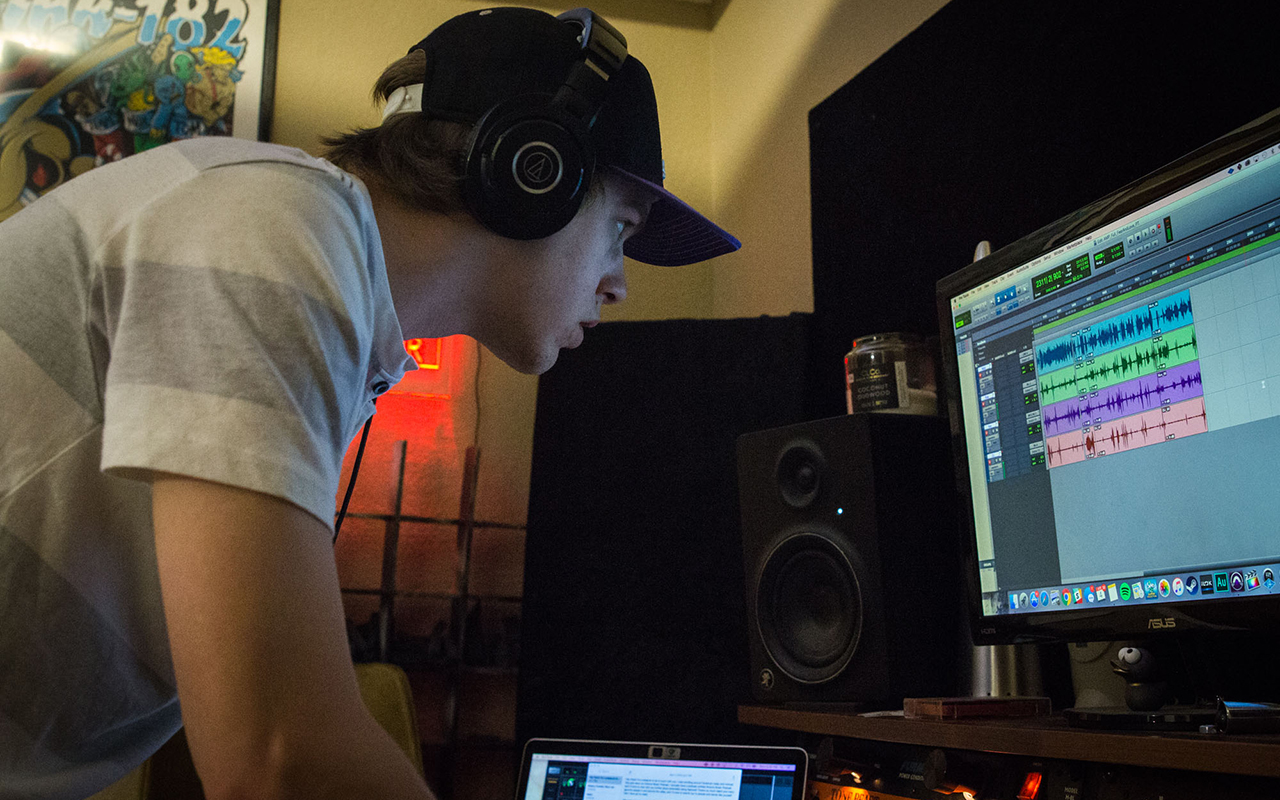 Finding a niche in Arizona

The fans podcasters Anthony Desamito and Genevieve Rice had in mind weren’t millennials or fans of Arizona music.

After meeting in 2010, Desamito and Rice became fast friends. Both are stand-up comedians with a love for the popular 1980’s sitcom “The Golden Girls.”

“I started listening to this podcast called Go Bayside where they recap episodes of ‘Saved by the Bell,’ ” Desamito said.

Inspired by Go Bayside, the duo recorded recaps of each “Golden Girls” episode for their Thank You for Being a Podcast starting in October 2014 and continuing for 3½ years.

“We did one every single week and we didn’t stop,” Desamito said. “We might have been late – we were late a lot – but we never missed a week.”

A podcast that began as a hobby had more than 70,000 downloads by March.

The final episode of Thank You for Being a Podcast was recorded live at the Club House in Los Angeles in January. But that may not be the end. Desamito says he’s interested in doing a reunion show.

What the future holds

Mathew Passy, a New Jersey podcast consultant with more than 10 years of experience, said the business will continue to grow.

“I think a few of the things we’re going to see are more media companies that are going to use podcasting as a way to deliver content daily, things like ‘The Daily,’ and use that as a delivery method in conjunction with other media platforms,” said Passy, who began his podcasting career in 2006 while working for radio station New Jersey 101.5-FM.

“I almost see a return to the ‘golden age’ of radio via podcast, where people use it purely for storytelling,” Passy said.

Steve Jobs described podcasts as “TiVo for radio,” meaning the audience draw is that they can listen to them whenever and wherever they want.

“I can pause it and go to work,” Tantillo said. “I can play it when I get to work or pause it and fast-forward it.”

Back in the dental office turned recording studio, Tantillo ran through final microphone checks while the members of Fear and Love settled into their chairs. Tantillo tapped on the spacebar of his computer keyboard and began to record.

For more than an hour, they laughed, joked and told stories about stage presence and their idea of entertaining fans. Like the time Howard was playing with such intensity that his fingers started to bleed.

“A couple weeks ago at Trunk Space, both nights I bled all over my bass, you know. It was fun,” Howard said.