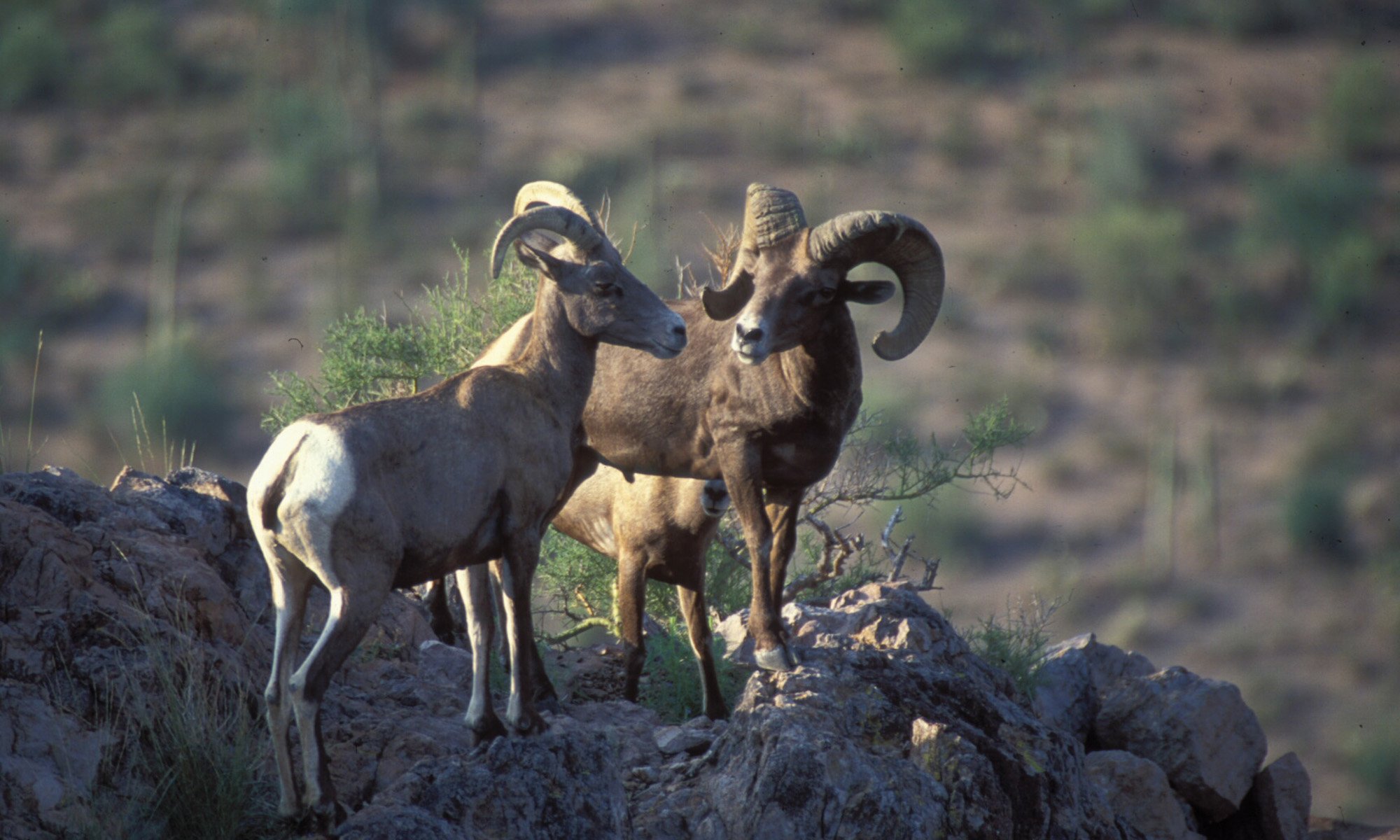 MARANA – After a two-hour hike through rocky, cactus-studded terrain west of Marana – with a left knee that no longer bends – 70-year-old Joe Sheehey arrived at Silverbell Peak and spotted an Arizona desert bighorn sheep.

The ram stood at the edge of the summit, almost posing, looking straight at Sheehey over a huge metal water tank. Sheehey quickly pulled out his binoculars, gripping them between old leather gloves. After less than a minute, the ram turned and sprinted out of sight down the mountain.

“They’re just such a majestic animal,” said Sheehey, former president of the Arizona Desert Bighorn Sheep Society. “The sheep in this region have really flourished, and a lot of it has to do with the amount of water that’s available to them.”

Many groups work to conserve Arizona desert bighorn sheep. Sheehey started in college while studying wildlife management at University of Arizona, hiking to find sheep in the Santa Catalina Mountains before they disappeared from the area. He joined the Arizona Desert Bighorn Sheep Society in 1970.

“A lot of conservationists and fish and game departments recognized that (bighorn sheep) need to be managed a lot a better. Survival versus maintenance. An adult sheep could survive on the moisture they get from foraging. But could that herd maintain itself without free water?”

Craig Shelley, a Queen Creek rancher and avid hunter, said water catchment systems for bighorn sheep do more harm than good. He would rather money be spent on yearly population surveys for the species. (Photo by Jenna Miller/ Cronkite News) 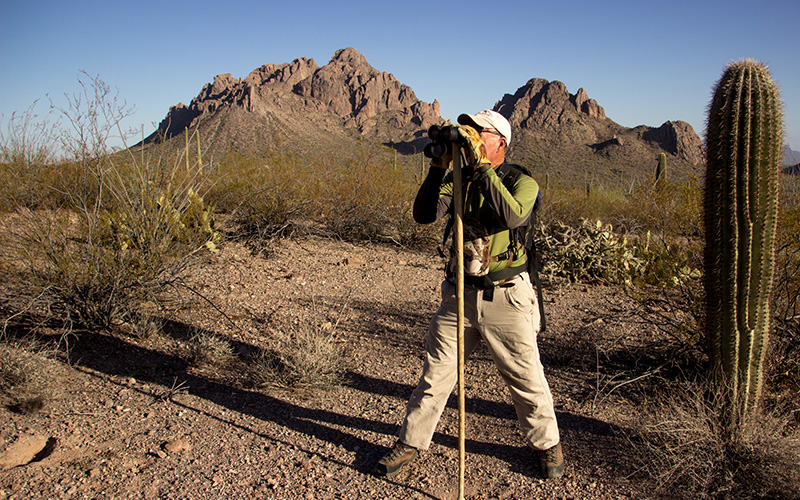 Joe Sheehey has been working to conserve bighorn sheep populations for about 50 years. The work takes him up mountain slopes and washed-out mining trails. (Photo by Gabriel Sandler/Cronkite News)

Bighorn sheep went from decimation in the early 1900s to now living in 80 percent of their historic ranges, a success for conservationists. But this requires vigilance. Bighorn sheep easily navigate through difficult terrain and can rehydrate in minutes after going without water for weeks, even months in cooler seasons. Disease, however, can quickly devastate herds, making them more vulnerable to predators and natural death.

“There’s a big difference between revival and recoupment and having lambs and being healthy sheep,” Sheehey said.

Partnering with the Arizona Game & Fish Department, the Arizona bighorn society has played a key role in protecting these animals across Arizona, and it recently started working on Rocky Mountain bighorn sheep as well. For these efforts, Sheehey sees development of water sources as critical.

Since its founding in 1967, the Arizona Desert Bighorn Sheep Society has constructed about 150 waterholes at a cost of $30,000 or more for each one. The Silverbell Peak catchment, for example, holds a reliable 5,000 gallons of rainwater for bighorn sheep and other wildlife

“It’s really a great water now. This trough holds water all year,” Sheehey said. “Ever since we redeveloped it (in 2013), it’s never needed to be filled.”

Water availability is challenging across Arizona, especially in the Sonoran Desert. At the Kofa National Wildlife Refuge east of Yuma, which originally was created for bighorns, even rainfall cannot guarantee water for its 725 sheep.

“Rainfall is the only good data set we have for the refuge, and while it’s connected to water availability in some ways, it doesn’t necessarily tell you exactly what’s going on,” said Christa Weise, manager of the Kofa refuge. “You can have a rainfall that just misses a drainage.”

Weise oversees the protection of water for sheep and other refuge animals.

This can mean hauling water in emergency situations, using helicopters when needed, or building covers to prevent evaporation. Sometimes rocks are blasted away to increase the size of tinajas, which are natural water basins.

“We obviously, unfortunately, cannot make it rain,” Weise said, “but what we can do is manage the wildlife waters in a way that they are available to the sheep. … Almost every year, there are some waters that need some attention from us.”

Historically, sheep would migrate to find water. Human development, however, makes this harder.

“We’ve limited their ability to move around. … It has become very difficult to for them to move through roads, canals, railways, population centers and so forth,” Weise said. “But I think that all native wildlife is worth protecting.” 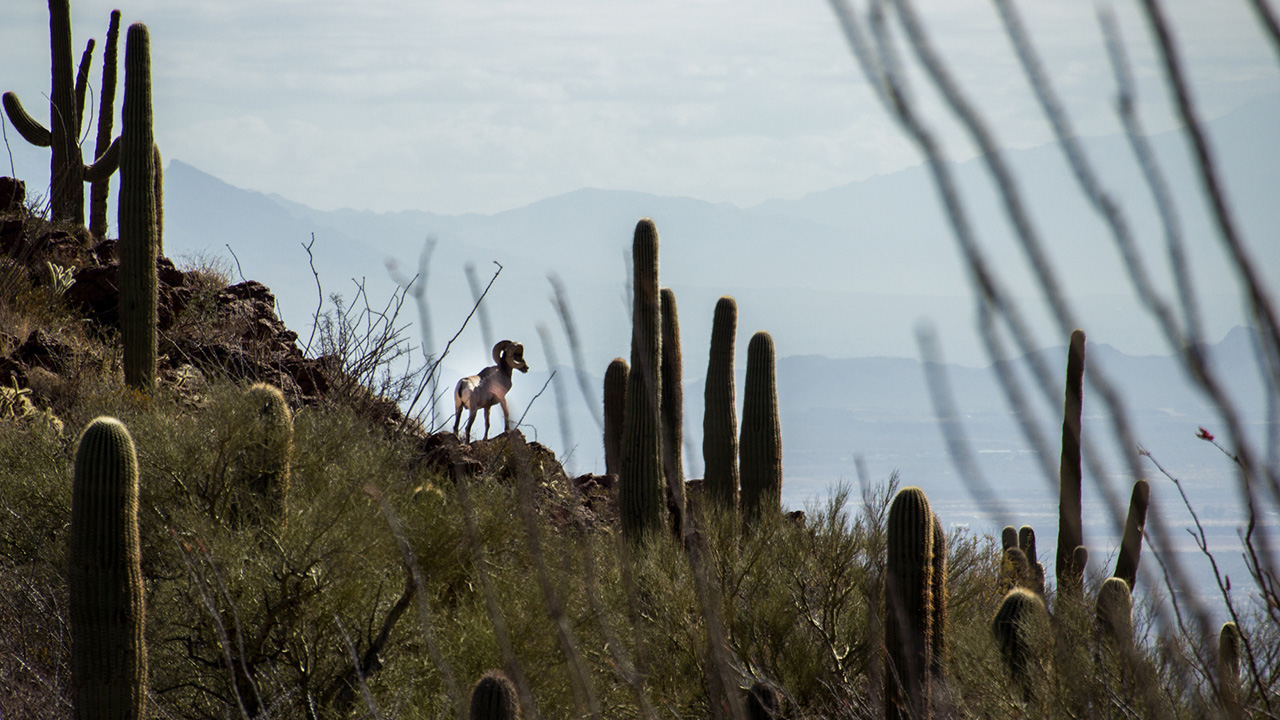 A desert bighorn surveys the landscape atop Silverbell Peak west of Marana. Without a water source, bighorns eat vegetation – including cactus – to hydrate. (Photo by Gabriel Sandler/Cronkite News)

Some conservationists, however, think Kofa managers and the bighorn sheep society are too focused on water and neglect other threats.

“Sheep are very nomadic,” said Craig Shelley, a rancher and hunter. “Sheep 100 years ago knew what to do when they ran out of water. But now that generations of sheep are so dependent on the waters that were built for them specifically, they’ll probably stand around there hoping someone will haul them some water. Or wait for a lion to kill them.”

“Once they put established water sources in there for the sheep, then the lion, he can stay there year round by the water, mill and kill sheep.”

Shelley donates to the Arizona Desert Bighorn Sheep Society and guides hunters on annual trips, which provides sheep conservationists their biggest revenue. Three bighorn sheep tags are auctioned and raffled each year, bringing in about $400,000, all of which goes to protecting the sheep.

“Predator controls, yearly surveys, because then you know what’s going on with your sheep,” Shelley said. “And then use the money more for transplanting the sheep back into historic habitats that they used to be in. You’d think any animal that lives here must be the toughest animal that lives. It’s not true.”

Brian Jansen, Kofa bighorn sheep recovery specialist for the state, disagrees with Shelley on sheep and lion movement. Monitoring shows that mountain lions stay on the move and sheep still range between waters and will choose natural sources when available.

Jansen admires bighorn sheep because of “where they live … rough, rugged mountains where other people won’t go, and can’t even wrap their heads around going up there.”

“Water is not detrimental,” he said.

“Maybe it’s time to shift a focus from water to other things,” Jansen said. “But that would only be useful if they still maintained the water that is currently there. If the department does not invest in maintaining the current waters, then they will fall into disrepair.”

Sheehey, with the Arizona Desert Bighorn Sheep Society, still focuses on water access and regularly inspects water catchments across Arizona. Before the catchments were built, he said, he once found dead sheep within 50 yards of water.

In the Waterman Mountains northwest of Tucson, high above old mining camps littered with rusted cans, shattered glass and bullet casings, the society helped install a catchment on a washed-out road. Sheehey visits the catchment to clear debris from the water collection point and retrieve photos from motion-activated trail cameras. 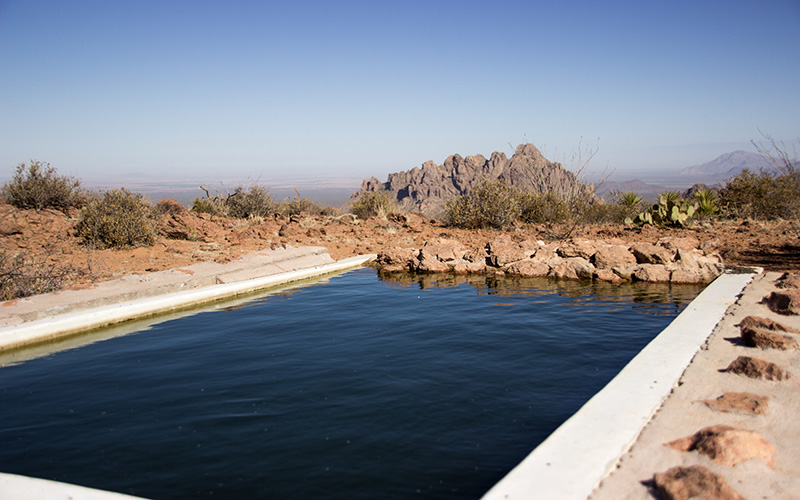 In collaboration with Arizona Game & Fish Department, the Arizona Desert Bighorn Sheep Society has developed 150 waterholes across the state, each costing about $30,000. (Photo by Gabriel Sandler/Cronkite News) 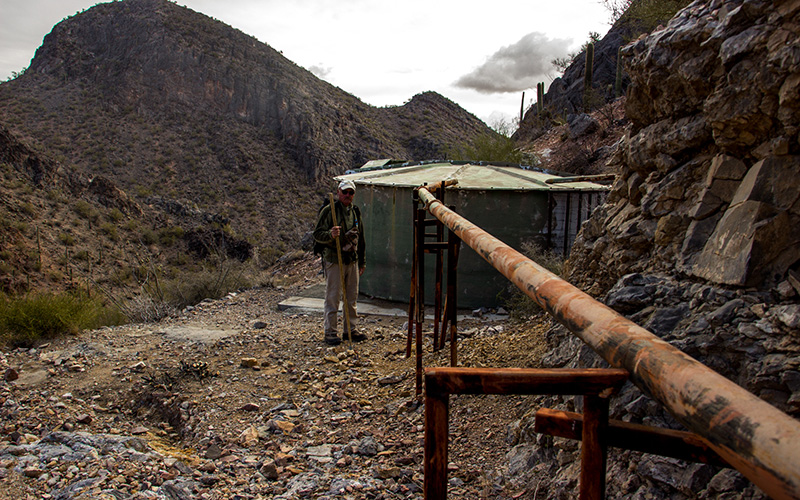 Joe Sheehey, 70, a former president of the Arizona Desert Bighorn Sheep Society, stands next to a catchment in the Waterman Mountains, fed by long pipes that supply water for desert bighorn sheep and other wildlife. (Photo by Gabriel Sandler/Cronkite News)

“My opinion, the best sheep waters are the sheep waters that are up higher on the mountain,” Sheehey said. “Their method of defense is flight, that’s why it’s imperative that they have this escape terrain.”

“When wild sheep come in contact with domestic sheep, the wild sheep die,” Sheehey said. “Pink eye, which in and of itself is not fatal, but they’re blind for a 10-day period. So that can very easily prove fatal with the sheep falling off of cliffs and being very easy prey for mountain lions.”

In 2004, conservationists tackled, treated and inoculated sheep with pink eye. In November, Arizona Game & Fish will transfer 30 animals to the Newman Mountain area east of Picacho, which requires helicopters and netguns. Sheehey monitors a herd in the Catalinas twice a week through VHF radio, checking for mortality signals. He hikes upward of 10 miles a week to track sheep and waters.

All of this is essential to herd survival, and, Sheehey said, “very expensive.”

“I love seeing the sheep, and I love this beautiful country,” he said. “The coolest thing is this time of year, when they’re having little lambs and watching the lambs run around. Three or four-week-old lambs, they’ll get together, three or four of them, and just charge up and down the mountain and play and butt each other. That’s my favorite.”