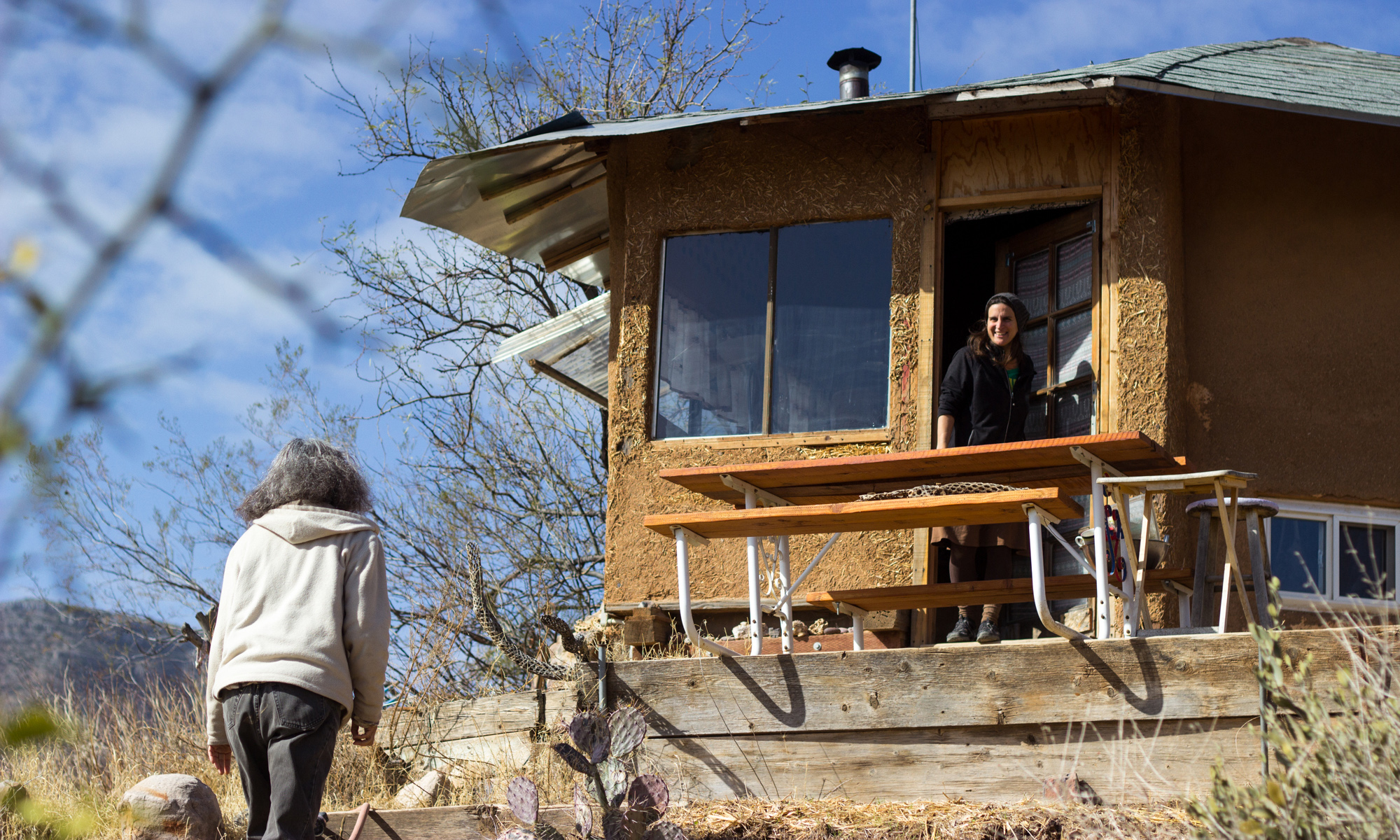 GLOBE – The residents of Wind Spirit live on 16 acres surrounded by citrus and olive trees, stony hills and played-out mines. They’ve built their homes from materials ranging from a dirt-straw concrete mix called cob to canvas teepees to buses painted blue, purple and yellow. Outdoor sinks have signs requesting visitors use tree-friendly soap. All the bathrooms have compost toilets.

Wind Spirit, tucked between Winkelman and Superior, just south of Tonto National Forest, is an “ecovillage,” where residents live by a public set of ever-changing guidelines for respecting each other and the land. 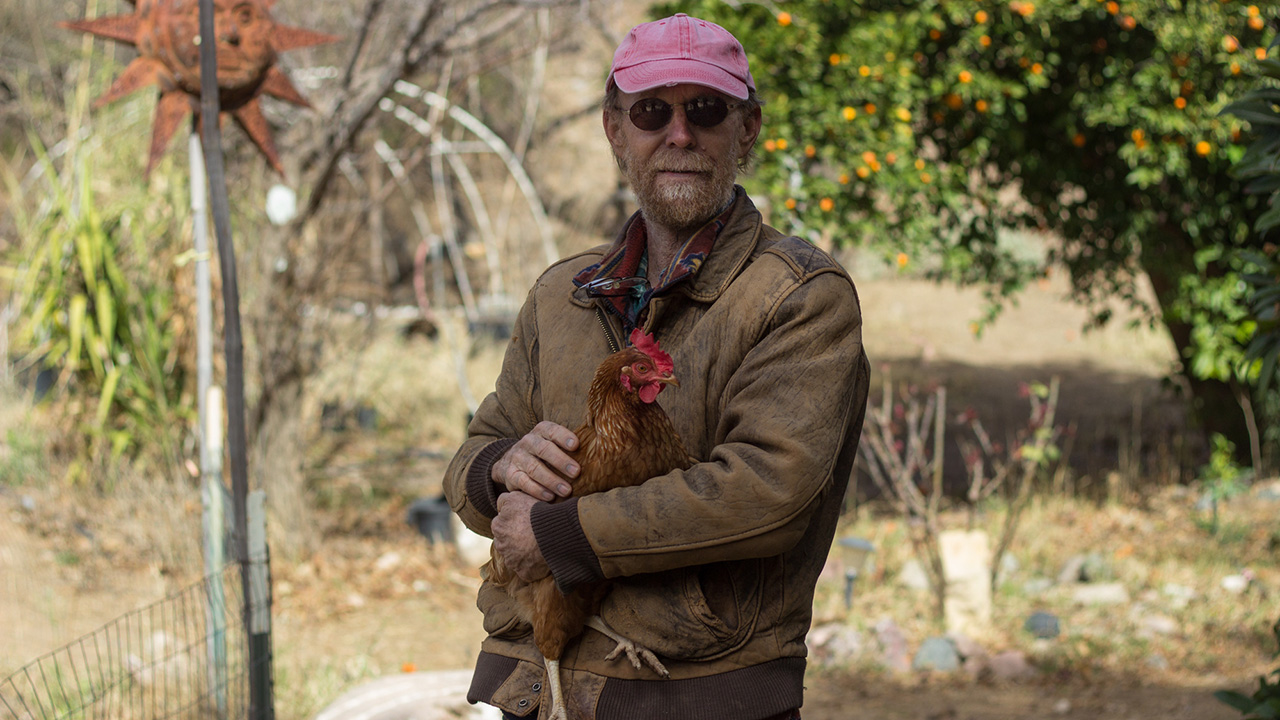 “It seems so much with the environmental movement that people are concerned about the environment, but they don’t want it impacting their lives because they’re used to these certain conveniences,” said Don Clark, who founded Wind Spirit with two friends.

“I want to live a lifestyle I can feel good about.”

Wind Spirit is one of many alternative communities throughout Arizona, often called intentional communities. Although their goals range from spiritual to musical, many focus on ecology and sustainability.

“Since last year, the volume of people inquiring has doubled,” Clark said. “A lot of people are saying they don’t like what’s going on, so they’re looking for alternatives.”

A recent storm had knocked out electrical power, shutting down Wind Spirit’s water pumps. Clark’s partner, Sarah Edelman, had to drive to Globe to get parts, but she hopes their solar panel project will change things in the next few months.

“We’ll never need to be on the grid for the well pump anymore, and that’s going to be great,” Edelman said.

Edelman is used to such challenges. She moved a year ago from another ecovillage outside Tucson called TerraSante Village.

Communal living has a long history, but many ecovillages have increased their networking with a sense of urgency. Online resources, such as the Fellowship for Intentional Community and the Global Ecovillage Network, help with that effort.

Sky Blue is executive director of the 30-year-old Fellowship for Intentional Community, which provides informational materials and a global directory of communities, ranging from monasteries to neighborhoods that share tools and have monthly potlucks.

Blue lives in a secular, income-sharing community in Virginia. He thinks many outsiders cling to outdated stereotypes of hippie communes, even if the motivations are accessible.

For communities that identify as ecovillages, Blue sees “dimensions of sustainability: cultural, economic and ecological.”

Timothy Krieter, his parents and his half-sister live together at TerraSante Village near Tucson. They moved from a community in the nearby Sacred Earth neighborhood. (Photo by Gabriel Sandler/Cronkite News)

Tom Endola, who runs an ecovillage community in the Sacred Earth neighborhood, believes every commune should have a few Volkswagen Beetles. (Photo by Gabriel Sandler/Cronkite News)

Through the main gate of Wind Spirit, just south of the Tonto National Forest, visitors enter the communal kitchen and gathering area. Maise, a community dog, usually is the first member of the welcome wagon. (Photo by Gabriel Sandler/Cronkite News)

Inventor Jim Rothers, who has lived at TerraSante, an ecovillage near Tucson, for about a decade, is working on a customized windmill. He built a 25-foot tall version but says he can build one twice as tall. (Photo by Gabriel Sandler/Cronkite News)

Sustainability is a foundation of ecovillages. At Wind Spirit, a sign on a sink reminds users that the rinse water will be put to good use. (Photo by Gabriel Sandler/Cronkite News)

At TerraSante Village near Tucson, residents experiment with fortress gardening to protect and manage food growth. Bruce Scher samples cilantro, part of his project to grow everything needed for salsa. (Photo by Gabriel Sandler/Cronkite News)

Wind Spirit, an ecovillage south of the Tonto National Forest, has full-time residents and hosts events, retreats and guests. It also has a small gift shop. (Photo by Gabriel Sandler/Cronkite News)

Don Clark stands in the middle of “bus village" at Wind Spirit, an ecovillage south of the Tonto National Forest. Vehicles left by residents have been gaudily painted and converted into housing. (Photo by Gabriel Sandler/Cronkite News)

Residents of Wind Spirit, an ecovillage south of Tonto National Forest, are renovating a hermit house for use by visitors or residents who seek a space for privacy and reflection. (Photo by Gabriel Sandler/Cronkite News)

Don Clark founded Wind Spirit, an ecovillage south of the Tonto National Forest, with two friends about 20 years ago. One friend now lives at a similar community in Oregon. The other founder passed away, his ashes scattered across the community. (Photo by Gabriel Sandler/Cronkite News)

Wind Spirit is south of Tonto National Forest, built into rugged hills among citrus trees and old mines. Founder Don Clark described it as "not primitive but rustic. … We want to live simply." (Photo by Gabriel Sandler/Cronkite News)

“They’re very holistic in nature, bringing together all the different aspects of life and also addressing it,” he said. “They’re also essentially a response to a critical analysis of society.”

“I liked the idea of a space that wasn’t relegated to some gutter,” Scher said. “The kind of people who have been marginalized to a certain degree, either by economic circumstances, economic choice or wanting to live in an alternative way that isn’t all commercialized … none of that was my personal experience – a lot of people, that is their experience.”

TerraSante’s residents nicknamed it a “laboratory for sustainability.” It sits in the desert as a member of the Sacred Earth neighborhood, 160 acres of “meta community.” 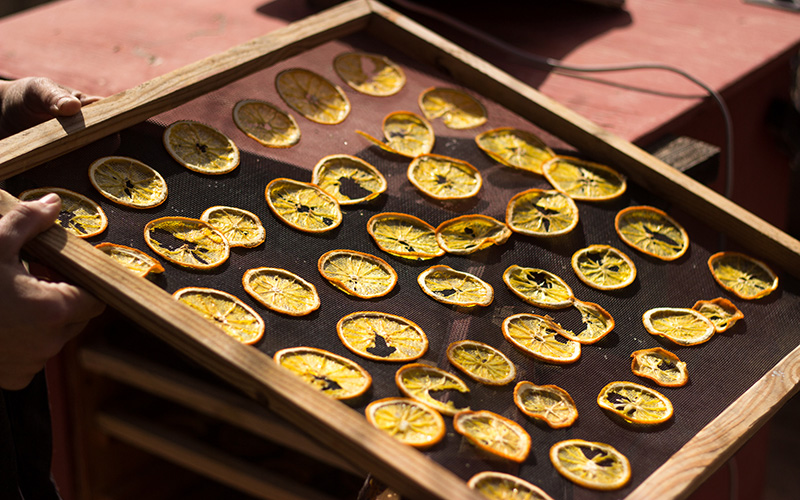 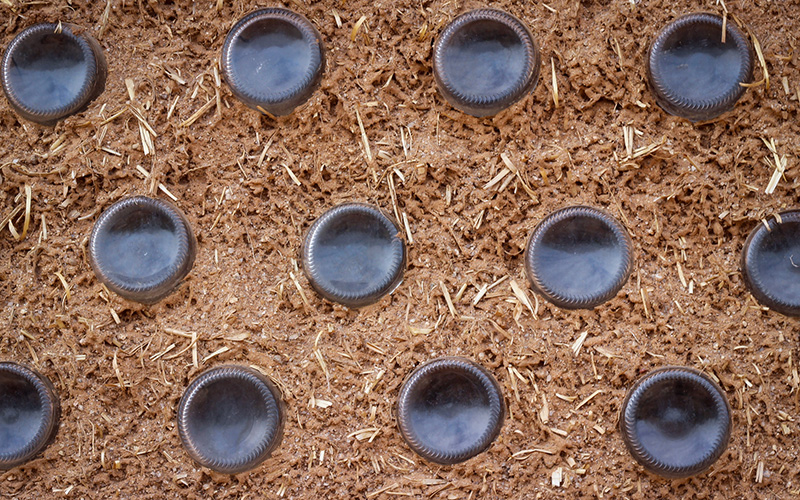 Residents at TerraSante near Tucson use glass bottles to bring natural light into a new building, constructed of cob. (Photo by Gabriel Sandler/Cronkite News)

The Krieters recently moved to TerraSante from Harmony and Health, a community across the road. Leo and Amy Krieter, their son Timothy, 5, and Amy’s daughter, Reana, live in an enormous Army tent pitched atop wooden construction palettes, more of which will eventually become walls and additions.

“Our long-term goal is to be able to set up solar panels, be independent, be able to pick this up, take it down wherever we want, whenever we want,” Leo Krieter said.

“My family and I, we’ve been looking for a calmer way, a better way. When we first started living in the community, I was way overweight, way unhealthy, still dealing with military experiences.”

Krieter credits TerraSante with helping him lose weight, helping his wife quit smoking and giving his kids a place to live “free without judgment.” A recent arrival, Jason Romanowski, 32, has been babysitting Timothy and living in a tent the Krieters loaned him. Reana attends high school nearby, which requires a drive to the bus stop and an hour-long bus ride.

The Krieters’ reuse of materials for their new home aligns with other TerraSante projects. Plastic tubs are cut and repurposed for funnel gardening. Metal pipes are tuned for experimental music, or windmill development. One resident collects and sells native seeds from the surrounding desert. 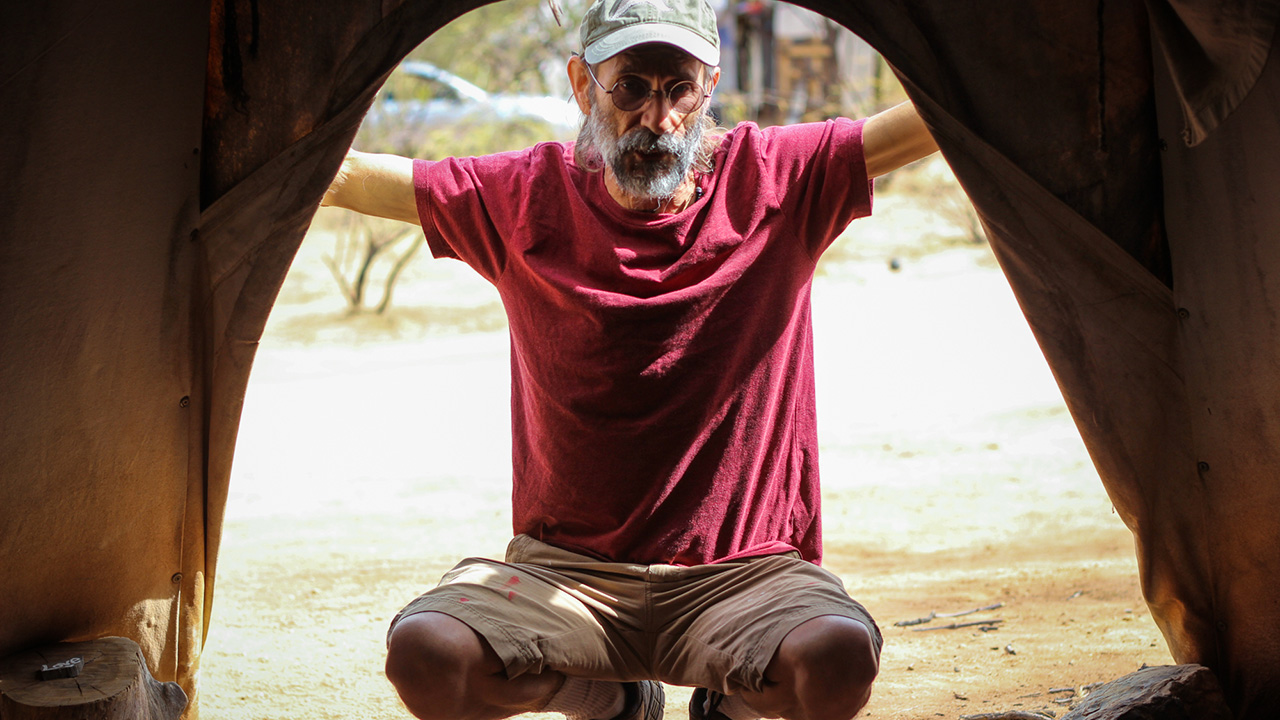 Bruce Scher, outside the Sacred Earth neighborhood meditation teepee, says he hopes the work being done at this “meta community” will be a blueprint for future climate refugees. (Photo by Gabriel Sandler/Cronkite News)

In Arizona, California, Colorado and New Mexico, the Fellowship for Intentional Community lists 68 ecovillages, with even more across the country and internationally. Some only have one or two members as they begin to form. One in Paonia, Colorado, is meant for the elderly.

The Community for Mindful Living, based in Berkeley, California, coordinates projects nationally and internationally. For ecological values, the residents, “strive to live more sustainably by embracing permaculture principles … treading lightly on our planet.”

The ecovillage label often gets paired with other descriptions, such as cohousing, communes, spiritual community or coliving.

Beth Ann Morrison is a Ph.D. student at Arizona State University’s School of Sustainability. At the Happiness and Sustainability Lab, she and her colleagues examine how urban neighborhoods and people in general can increase quality of life through sustainability.

“(Ecovillages) are experimental,” Morrison said. “I love to see people exploring what new possibilities are there, maybe not new but alternative. The critique I have for doing things outside the city is that while it’s good for demonstrating what can be done … it doesn’t question the status quo. I kind of call those gated communities, even if they don’t look the same as what comes to mind with that term.”

Morrison sees problems with land ownership, indigenous cultural appropriation, lack of diversity and the attitude that many equate sustainability with sacrifice. In her mind, climate change isn’t an “oncoming catastrophe,” just a reality to which “people will have to adapt.”

Some Arizona ecovillages experiment with sustainable practices, but Morrison said living differently does not always mean making a difference.

“To go off into the middle of nowhere and remove yourself from larger society,” she said, “when you do have privileges and access to resources that you could otherwise be mobilizing. … Unless you’re doing something on a deeper level or a broader level, it’s a sheltered environment, it’s very private.”

For Morrison, unsustainability stems from inequality. She prioritizes collaborative designs, community building and resource sharing in neighborhoods as a more impactful way to address the problems that inspired TerraSante, Wind Spirit and others.

“Then you can start creating together, and envisioning new amazing things, like the ecovillage,” Morrison said. “Then gather the resources you need to start to make it.”

Even with the limitations and challenges of a rural ecovillage, however, Scher and Clark believe their sustainability models are doable.

“One of my fun projects was to try and create all the ingredients for summer salsa growing in the garden,” Scher said. “It was a challenge because cilantro is so hard to grow in the summer.” 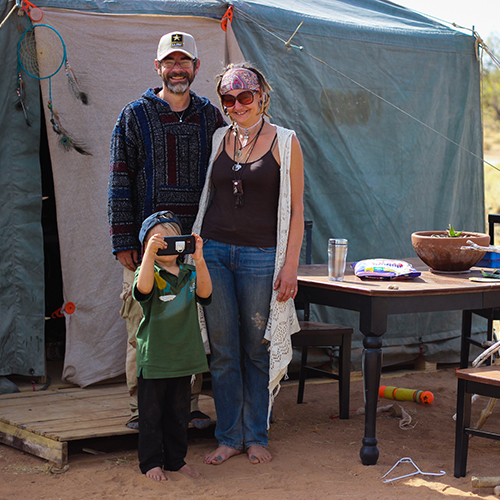 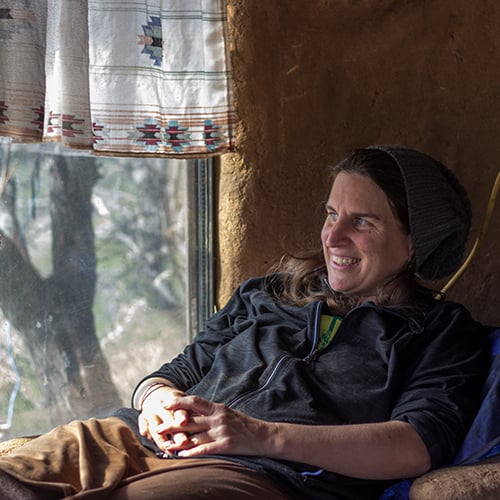 “… it is a different way of life, but it’s something that we were really looking for …”

Hover or tap on the pictures to hear from the ecovillage residents.

Wind Spirit can grow a wider variety of food compared with TerraSante Village’s desert surroundings. In addition to its citrus and olives, the community has several chicken coops, each with a protected feeder that the chickens have learned to open but sparrows can’t.

Breezy Wilson lives in a cob house at the top of a ridge in Wind Spirit and uses a solar dehydrator to turn orange slices into “citrus chips.” She and her partner took on cooking for the community, specializing in vegan diets.

“Lots of veggies and fruits and nuts and seeds, and I try to put a lot of high protein foods out there without there being meat involved,” Wilson said. “Chia seeds, flax seeds, pumpkin seeds, sunflower seeds. … We go to Tucson and go to Sprouts or Natural Grocers for whatever the land doesn’t provide.”

Many residents of TerraSante and Wind Spirit worry that mainstream living habits will not last, and their sustainable practices will become essential.

Parts of the United States have already dealt with this reality. The “New York Times” reported on Louisiana residents who will abandon a coastal town because of climate change. A research paper submitted to Elementa predicts that 4 and 13 million people in the United States will be exposed to rising seas by 2100.

“If you look at what the scientists are saying and the data says, we’re heading for that scenario of really difficult habitation on planet Earth. We’re getting a jump on that, creating a space where we’re going to start looking at this stuff. How do we live in a marginal environment?”