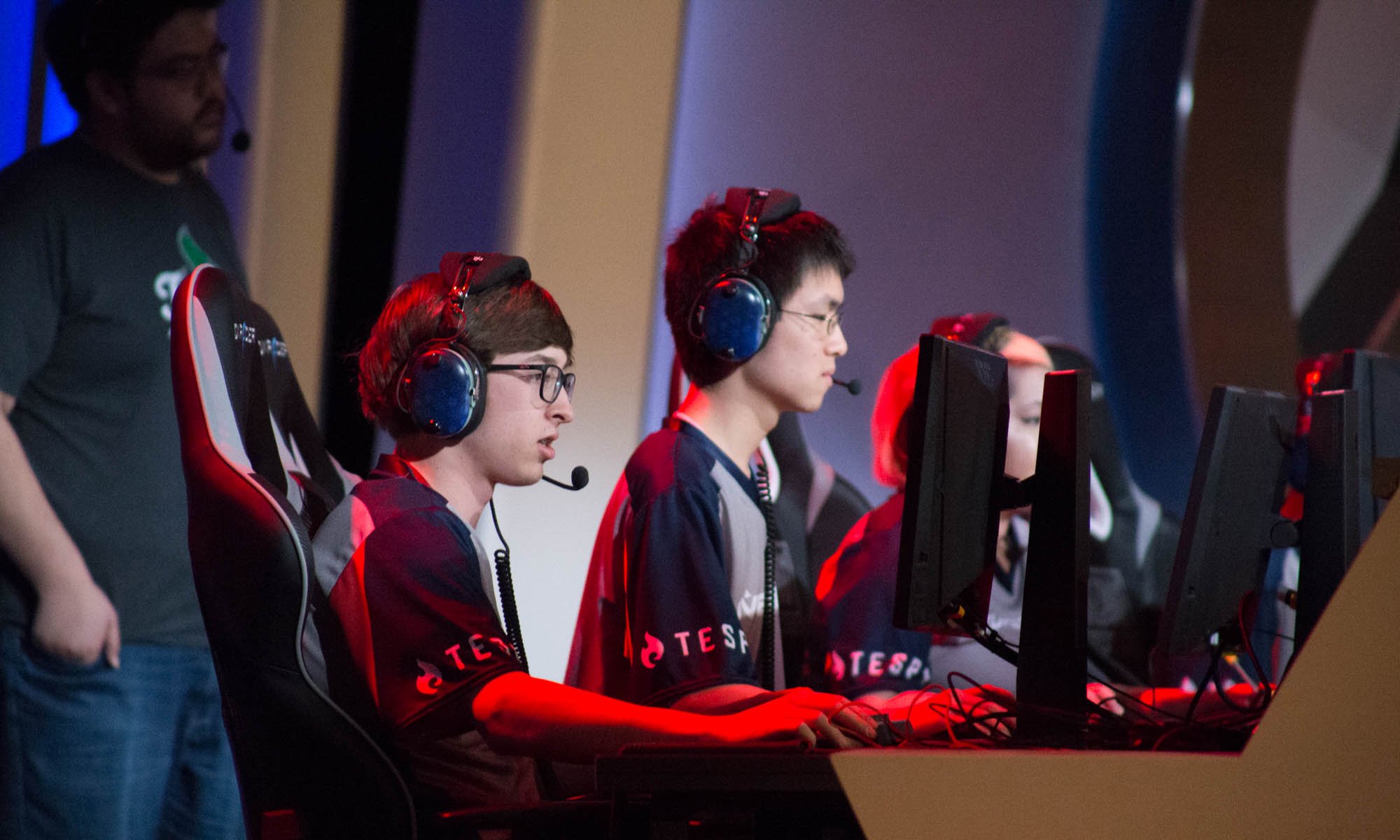 No sweat in esports, but plenty of mental rigor, cosplay fans and money

TEMPE – A gorilla with a laser gun draws a bead on a cybernetic archer with metal limbs.

A black-clad assassin aims her sniper rifle at the Grim Reaper, who’s armed with two shotguns.

Surrounded by fans and cosplayers, with thousands watching on their phones, laptops and desktops, four teams of esports competitors battled in February for video game supremacy from their screens on an Arizona State University stage.

Rome had its gladiators, the NFL has its quarterbacks, and the video game industry has esports players. This is sports in the tech universe, with a Fiesta Bowl Overwatch championship drawing more than 600 screaming fans on campus and an estimated 4,000 people watching online.

And that’s just college-level esports. One professional championship last year – named with sports-like hyperbole the League of Legends World Championship – claimed more than 60 million viewers, more than double the viewership for the championship game of the 2017 NBA Finals, according to “Variety.”

The crowd watches the game action on big screens during the 2018 Fiesta Bowl Overwatch Collegiate National Championship at the Sun Devil Fitness Center in Tempe. (Photo by Miles Metke/Cronkite News)

Blizzard, a globally known developer and publisher of entertainment software such as World of Warcraft, Hearthstone, Overwatch and Diablo, partnered with Fiesta Bowl to run an esports tournament. (Photo by Daria Kadovik/Cronkite News)

Fans hold signs to show their support for the teams. The crowd chanted "Defense!" and other cheers at the esports competition. (Photo by Miles Metke/Cronkite News)

Announcers Cora Georgiou, Andrew ‘ZP’ Rush, and Alberto ‘Crumbz’ Rengifo debate a move made by one of the players during the 2018 Fiesta Bowl Overwatch Collegiate National Championship. (Photo by Miles Metke/Cronkite News)

The UC Irvine team had high expectations for the Overwatch championship but they lost to UC Berkley in the final round. (Photo by Daria Kadovik/Cronkite News)

A fan waves a sign during the final moments of the 2018 Fiesta Bowl Overwatch Collegiate National Championship in Tempe. UC Berkeley defeated UC Irvine 3-0 in the final round, earning them back-to-back titles. (Photo by Miles Metke/Cronkite News)

The UC Berkeley team celebrated their championship win in the Overwatch competition. The championship battle against UC Irvine ended in a 3-0 sweep by Berkeley. (Photo by Miles Metke/Cronkite News)

The controversy: Sport or not?

Esports has fans, merchandise and money, and, like any other sport, controversy. But if someone doesn’t get sweaty or run on a field or a court, some critics question whether it’s really a sport.

“I am not a friend of esports,” he said during one broadcast, calling players overweight and unathletic nerds.

Nick Theodorakis, a player for University of California-Irvine in last month’s competition at ASU, said the debate over esports’ place on major sports networks doesn’t take into account the “really mental” focus it requires.

Hundreds of hours of training are required to learn strategies at a competitive level, he said, and the training regimen and competitions’ structure resemble other sports broadcast on sports networks.

“People are always going to make a big deal of the semantics,” he said. 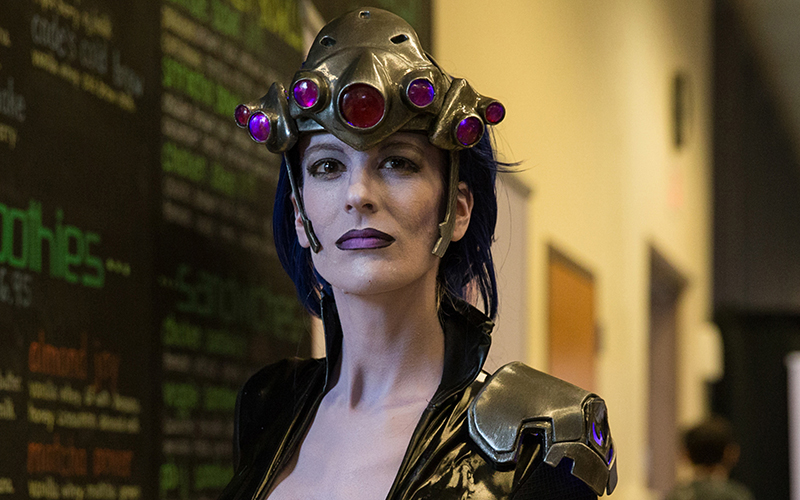 Mary Brite, dressed as "Widowmaker," is a professional prop maker in Phoenix. Many cosplay characters at the tournament were able to meet other versions of their own Overwatch game characters. (Photo by Miles Metke/Cronkite News) 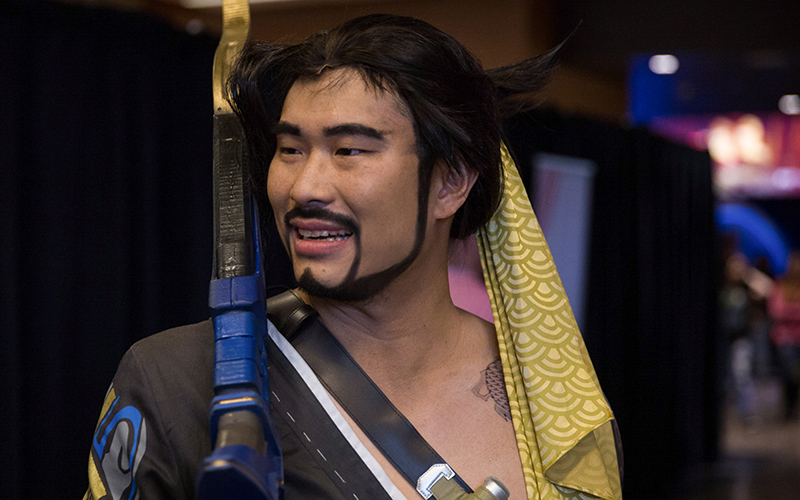 Elin Xu, dressed as Overwatch character "Hanzo," talked about the creative talent and ability cosplay requires. Hundreds of people filled the Sun Devil Fitness Center, with some dressed as characters from the game. (Photo by Miles Metke/Cronkite News)

The action: A spectacle to experience

The esports competition on the ASU campus shared the vibe of a WNBA game or a tennis match, seasoned with costumed fans and presented with the production design of “The Voice.”

Two six-person teams hunkered behind a metallic array of outward-facing thrones, their bodies and screens obscured as they played Overwatch, a gunner video game, on a stage raised a few feet above the crowd. The game’s logo was emblazoned in the center of a sleek, metallic gray background.

Seated at their computers, players furrowed their brows and clicked furiously while the action played out on two screens flanking the stage.

Commentators discussed the action as it played out on Twitch, a live streaming website.

“This is some very aggressive play to make sure that the payload can keep pushing past that ‘S’ loop in the second point,” Alberto Rengifo said as University of California-San Diego advanced on UC-Irvine.

Clothing and character figurines were for sale, and fans made signs to support their teams at vending booths in the lobby.

Dozens of cosplayers, dressed as their favorite characters from Overwatch, drew attention and adulation as they walked through a corridor.

Enlin Xu, adorned in tattoos, flowing robes and a bow and arrow as Hanzo from the game, traveled from Tucson with his friend, Sara Spellman. She was dressed as a “gender-bent” Roadhog, playing the male character as a woman.

The money: It’s a lot and growing

Esports is growing in economic clout, with video game companies sponsoring tournaments with winnings that can reach $20 million. The competition helps fuel the $30 billion video-game industry in the U.S., where a game such as Grand Theft Auto V can bring in more money than a Star Wars movie.

Analyst group Newzoo estimates the esports sliver of the gaming industry of competitions, games and merchandise was worth nearly $700 million globally last year, and it will grow to $1.5 billion by 2020.

Owners of traditional sports teams are gravitating toward esports ownership.

Blizzard Entertainment, the developer of World of Warcraft and Overwatch, created its own esports league: the Overwatch League. The OWL has 12 regional teams that play through a five-month regular season, playoffs and league championship. And, just as the Arizona Cardinals’ promote star receiver Larry Fitzgerald, the league markets players with such names as Numlocked as superstars to watch.

The champions: Who triumphed

College games can be fun, intense and even lucrative, some players say, but the professional level requires a commitment that’s too extreme for many.

By the time the Fiesta Bowl Overwatch Collegiate National Championship ended, the six players from the University of California-Berkeley snagged the $120,000 in scholarships prizes, beating three other universities from California and Canada.

UC-Berkeley player Gandira Prahandika said the time commitment for professional play “is just not for everyone,” including him. The training and touring schedule makes professional video gaming a full-time job.

But UC-Berkley’s Izzy Barrera said esports, on the college and professional levels, is soaring.

Soon, advocates say it may become as common as other amateur and professional sports.

“It feels like the beginning of something really great,” Shawnette Gauer said.