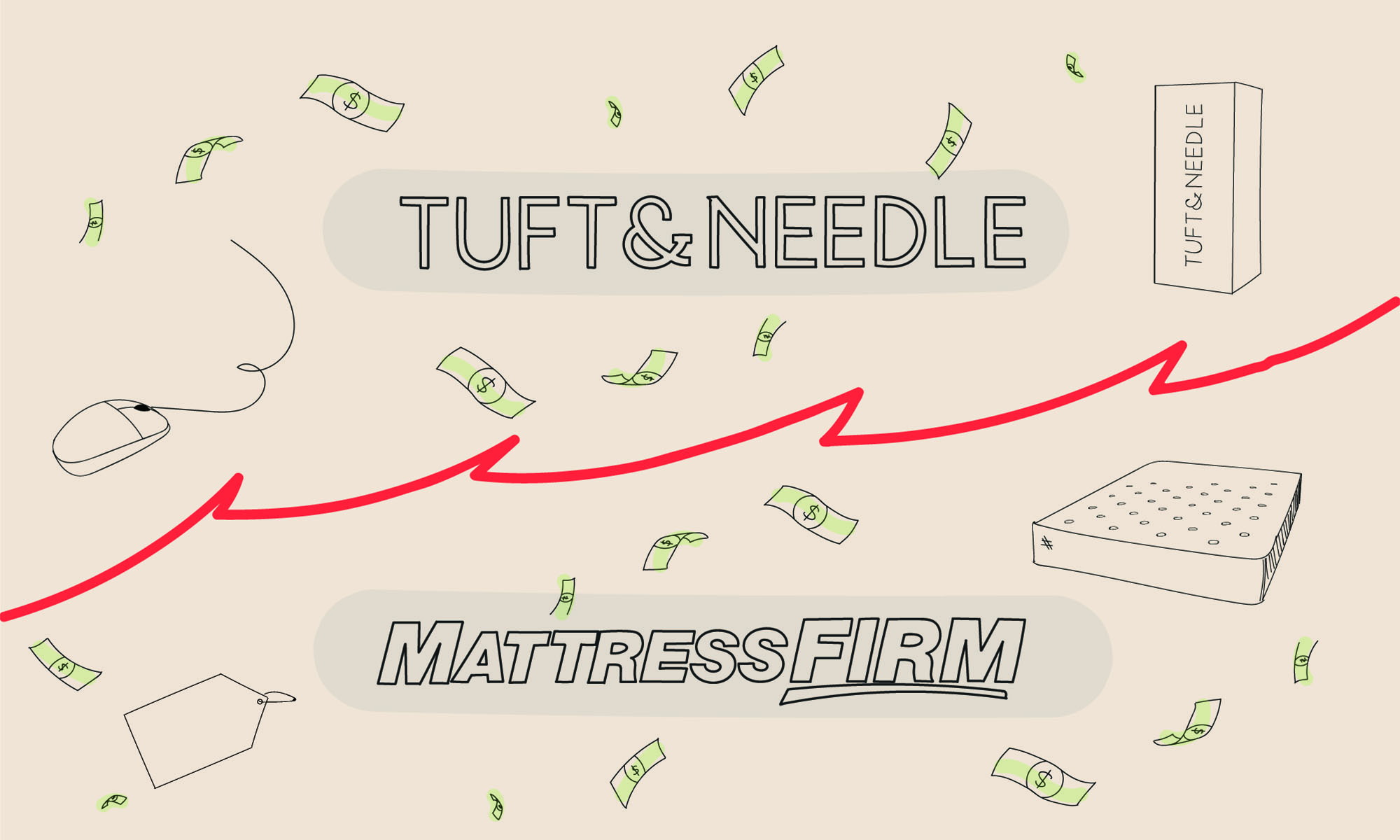 Suburban Gilbert doesn’t resemble the hoodie-clad, tech-savvy millennials that fill Tuft & Needle’s headquarters, located about 20 miles away in downtown Phoenix. The crowd is a congregation of middle aged and grey haired people, accompanied by children playing as they wait for their turn to enter the new storefront.

The majority of Tuft & Needle’s marketing is encompassed by defiance of traditional norms in mattress sales, including high pricing and use of materials deemed unnecessary. In addition, its self-proclaimed “disrupt” of the mattress industry was initiated by a unique and unseen business model: online exclusivity.

Tuft & Needle’s decision to incorporate brick-and-mortar retail spaces may be perceived as retraction into the methods used by mattress companies before it, but according to Daehee Park, co-founder of Tuft & Needle, it is an extension.

“This is a response to our customers,” said Park. “We want to be omnipresent. Phoenix can be a far drive, and we want complete coverage.”

Tuft & Needle, which Park founded in 2012 with fellow Penn State alumnus JT Marino, is based in downtown Phoenix off Grand and Seventh streets. The company sold mattresses exclusively online until the opening of its first retail space in San Francisco’s SoMa neighborhood in summer 2015. 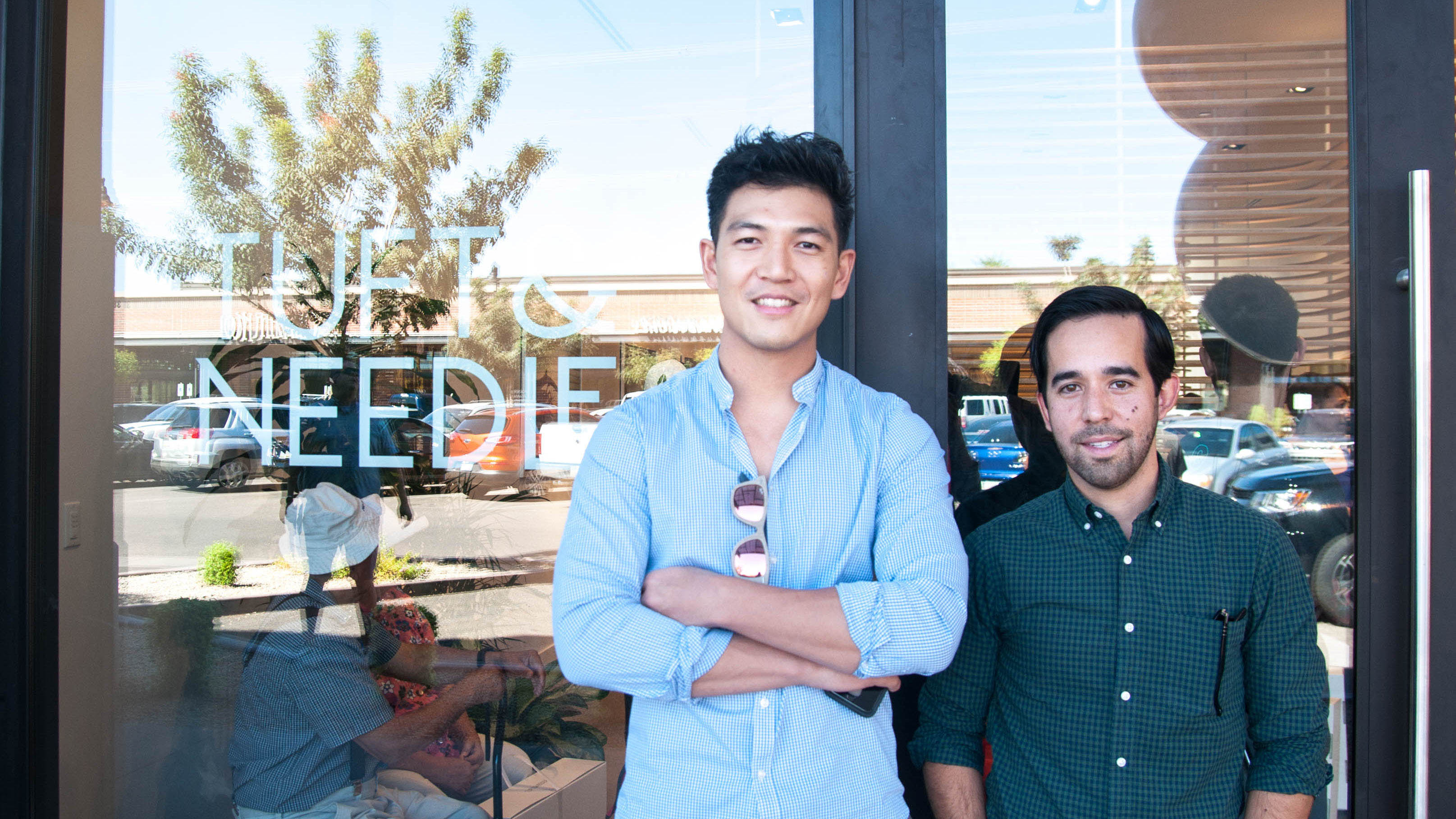 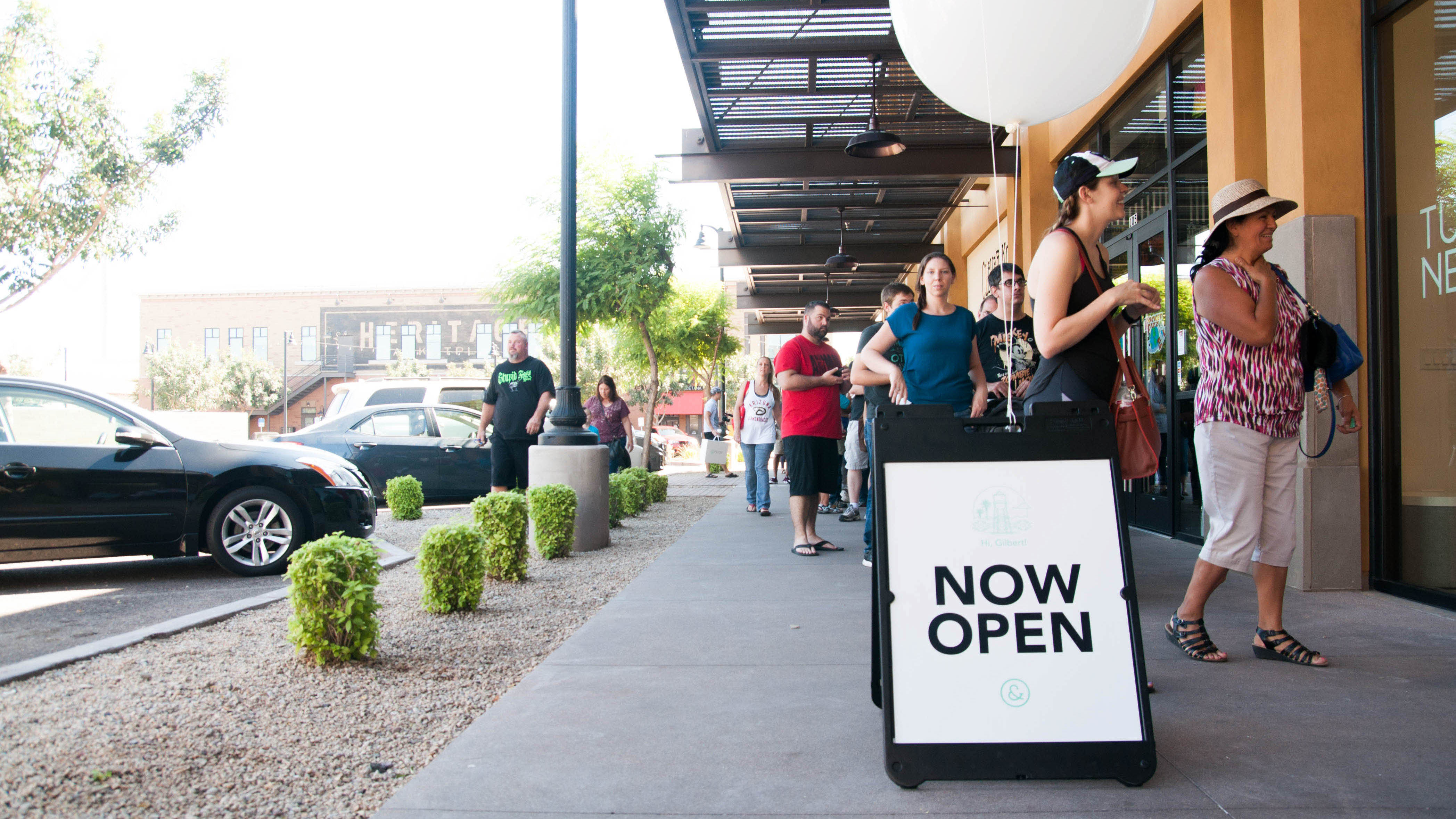 A line wraps around the building at Tuft & Needle's grand opening of their Gilbert, Ariz. location. (Photo by Ashley Ballard/Cronkite News) 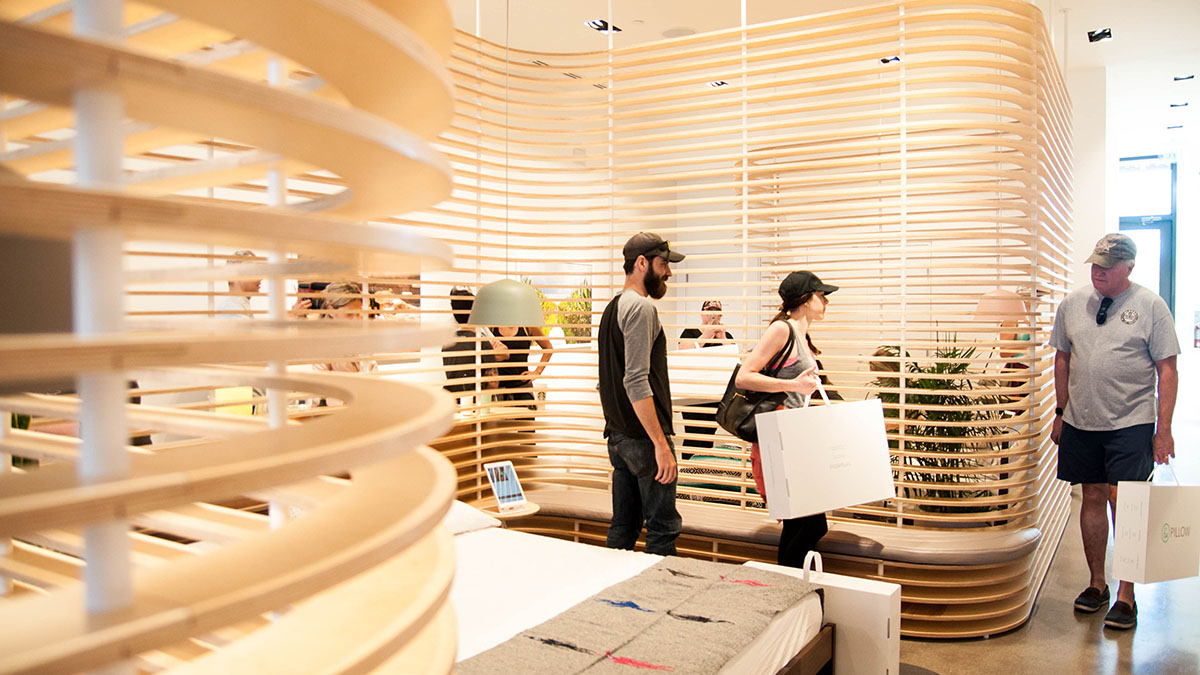 A couple shops the new Tuft & Needle location in Gilbert, Ariz. after claiming their free pillow for the location’s opening day. (Photo by Ashley Ballard/Cronkite News) 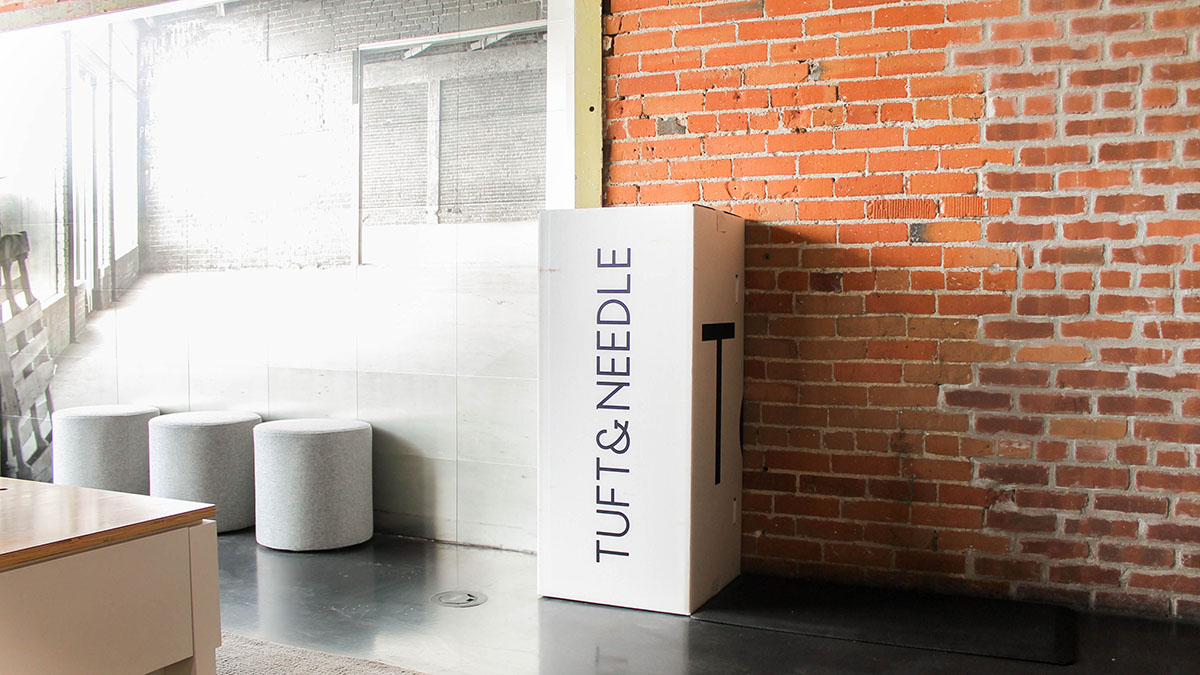 Tuft & Needle offers one type of mattress, made of its own patented material dubbed “T&N Adaptive Foam” and a base layer for support. The company describes its model as universally comfortable. It emphasizes the mattresses don’t have springs, memory foam or latex, which Park insists are unnecessary.

The report also projects that the annual growth of the industry will be by 1 percent every year from 2017 to 2022, attributing this increase to growing annual household income and the “access to high-quality, low-cost materials.”

Mattress Firm, a leading retailer in the mattress market that is repeatedly condemned by name in Tuft & Needle advertisements, recently launched a campaign titled “Don’t Get Boxed In,” a reference to the boxes that online mattress companies’ products arrive in. 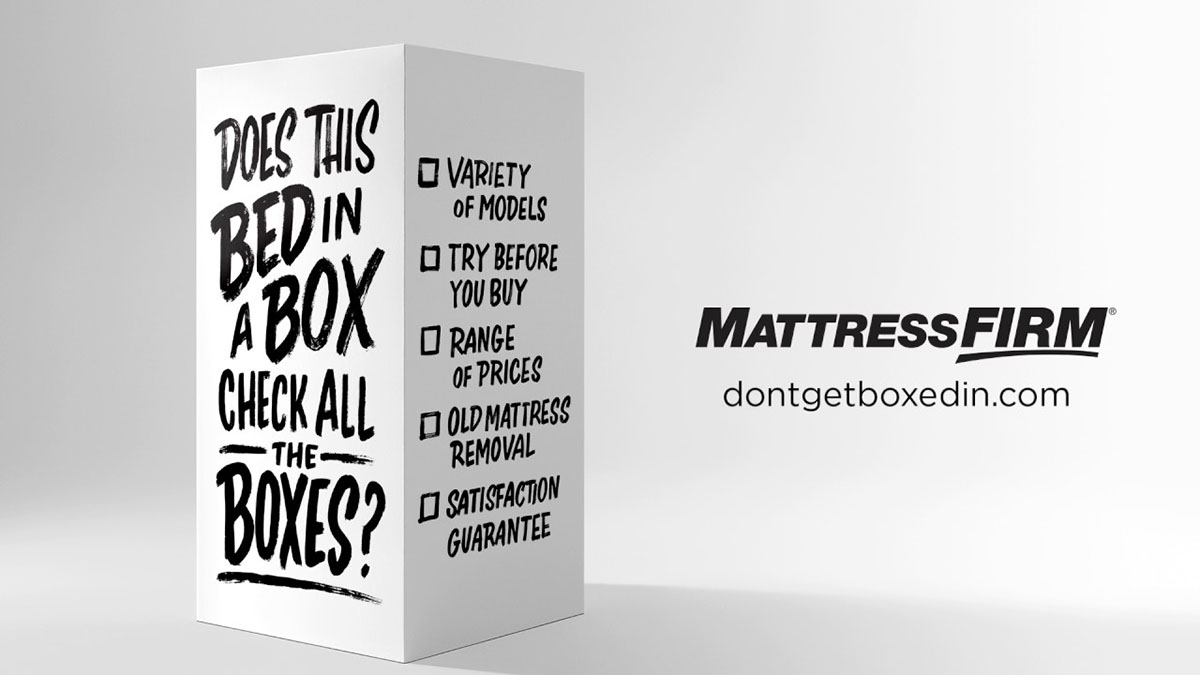 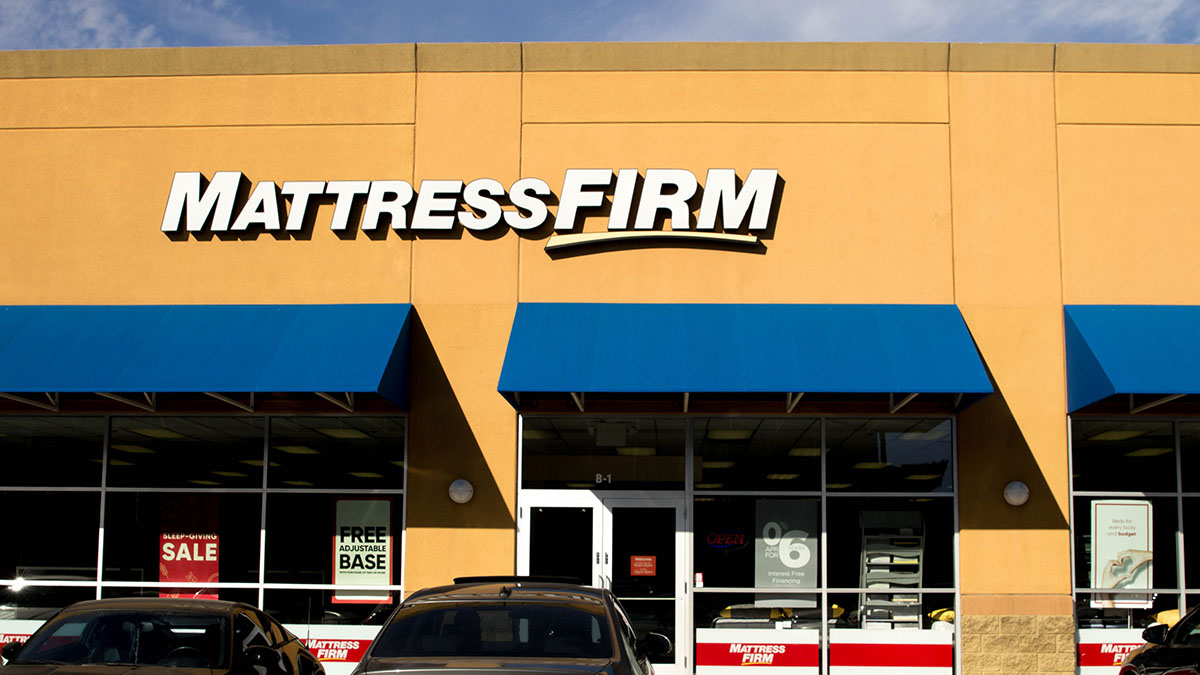 “We felt we had seen aggressive and negative advertising in Phoenix,” said G’Nai Blakemore, the public relations manager for Mattress Firm. “Much of their advertising (about us) is speculation.”

On Oct. 16, Mattress Firm Inc. filed a lawsuit in the U.S. District Court for the Southern District of Texas against Tuft & Needle on the grounds of trademark infringement under the Lanham Act. Enacted in 1946, the act places a ban on infringement of trademark, as well as false advertising.

Mattress Firm alleges in its lawsuit that Tuft & Needle has advanced in the mattress industry by “orchestrating a multi-state smear campaign against ‘greedy’ mattress stores.”

According to the lawsuit, Mattress Firm alleges that Tuft & Needle used its likeness for a variety of advertising campaigns, including using and modifying the Mattress Firm logo to display statements such as “Mattress Goliath” and “Mattress Bet,” the latter in reference to a campaign in which customers are reimbursed and paid an additional $100 if they decide to return their Tuft & Needle mattress and purchase at Mattress Firm instead.

“This ‘playful’ campaign is just the latest example of Tuft & Needle diluting Mattress Firm’s trademarks and disparaging its brand in the name of ‘honesty,’” the lawsuit reads. “In actuality it is Tuft & Needle’s business model that is built on deception.”

“There is no question that the sole purpose of Tuft & Needle’s pervasive scheme to bait customers with Mattress Firm’s name and then redirect them to false advertising is to deceive consumers in the marketplace and unfairly influence their purchasing decisions,” the lawsuit elaborates.

The advertisements for Mattress Firm’s “Don’t Get Boxed In” campaign were on light rail vehicles in Phoenix, as well as on the station platforms. Blakemore described this as a response to Tuft & Needle’s advertising being extremely prevalent and conspicuous in the area prior to this campaign.

“As a participant in the bed-in-a-box sector, Mattress Firm welcomes fair competition and believes in the consumer’s right to product information and transparency,” the document reads. 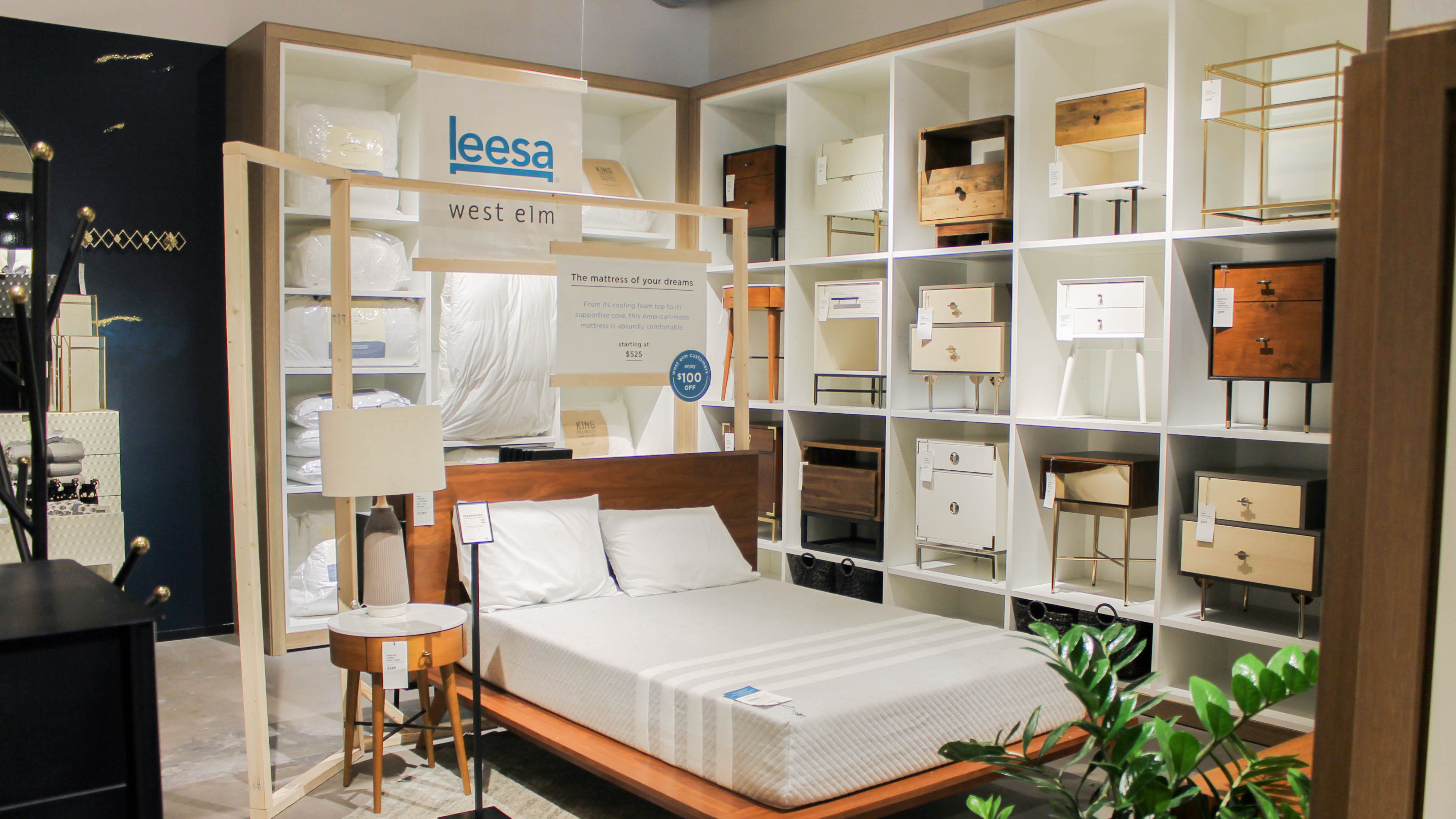 A display for Leesa is set up inside West Elm’s Phoenix location off of Camelback and Central streets. (Photo by Ashley Ballard/Cronkite News)

Opening up storefronts has not been the sole method of extending to brick-and-mortar for the digitally native mattress companies that followed Tuft & Needle. Leesa, for example, has begun to retail in West Elm furniture stores as of September, Casper, which is pursuing in-person retailing at Target stores.

Casper declined to interview for this story, and Leesa did not respond to requests for comment.

“So many businesses are figuring out ways not to have storefronts, but showrooms,” said John Eaton, a clinical professor of marketing at the W.P. Carey School of Business at Arizona State University. He cited this shift from digital nativism to brick-and-mortar as a marketing strategy, comparing Tuft & Needle’s showroom to a billboard.

“They pass it, they drive by it every day, and then eventually they will become curious and go in,” he said. 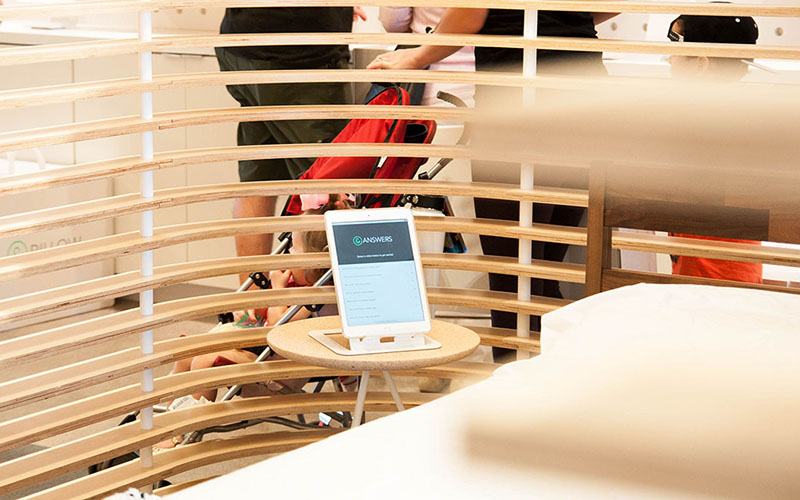 A tablet sits next to one of the display mattresses with a series of answers to frequently asked questions at the Tuft & Needle location in Gilbert. (Photo by Ashley Ballard/Cronkite News)

Eaton cites automaker Tesla’s showrooms, often found inside of shopping malls, as a similar example to Tuft & Needle’s model. Whether a mattress or a luxury vehicle, both offer showroom models, but when it comes time to make a purchase, the consumer is prompted to order online.

“Inventory in-store will continue to decrease,” Eaton said. “This is the direction retail is headed in.” 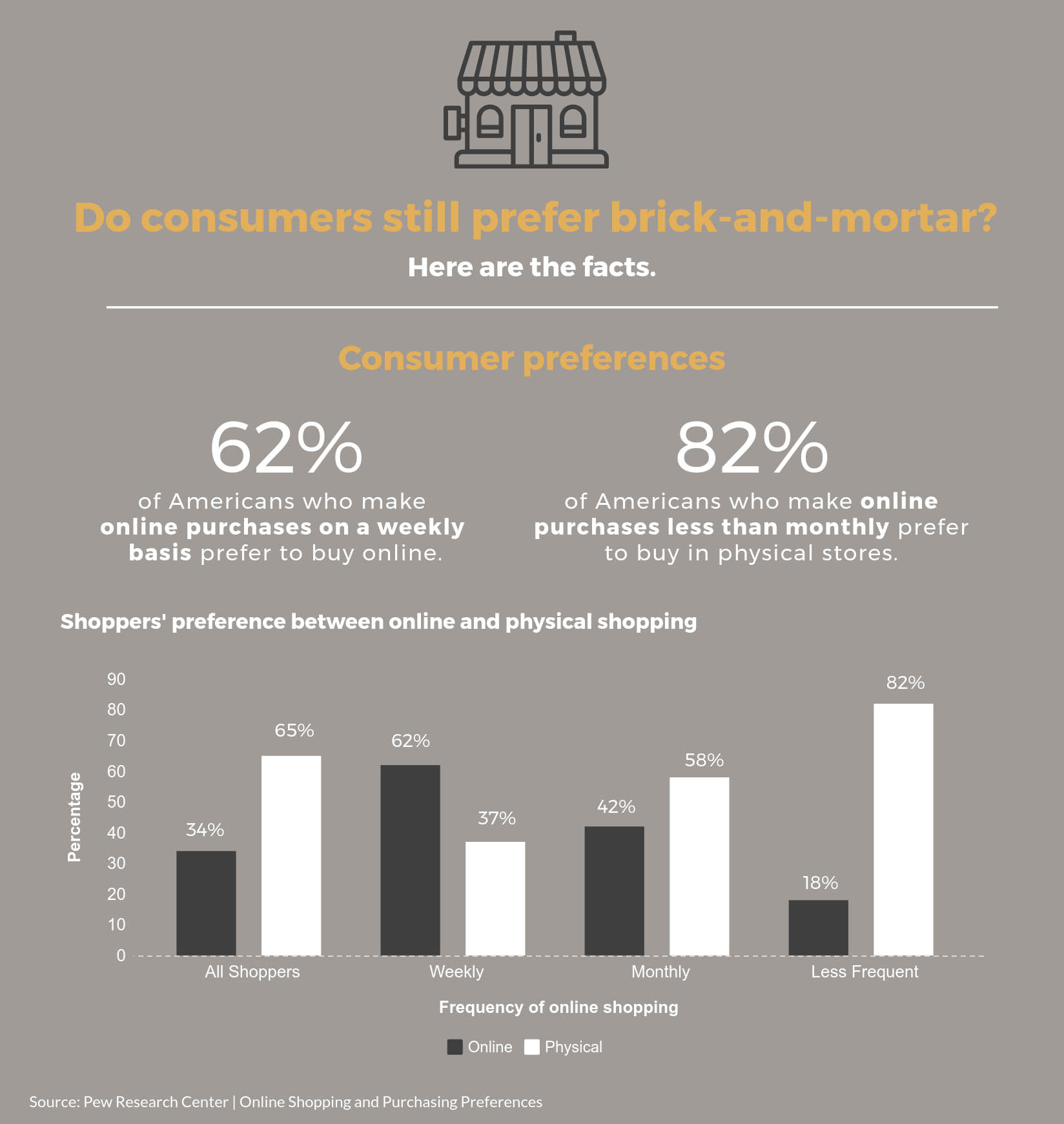 Statistics from the Pew Research Center on consumer preferences in online shopping show there is an association between frequency of online purchases and whether or not the consumer prefers to buy online, citing that 62 percent of weekly online shoppers prefer to buy online, while 82 percent of those who purchase online less frequently prefer to shop in-person. The report also indicates that eight in ten Americans are online shoppers. 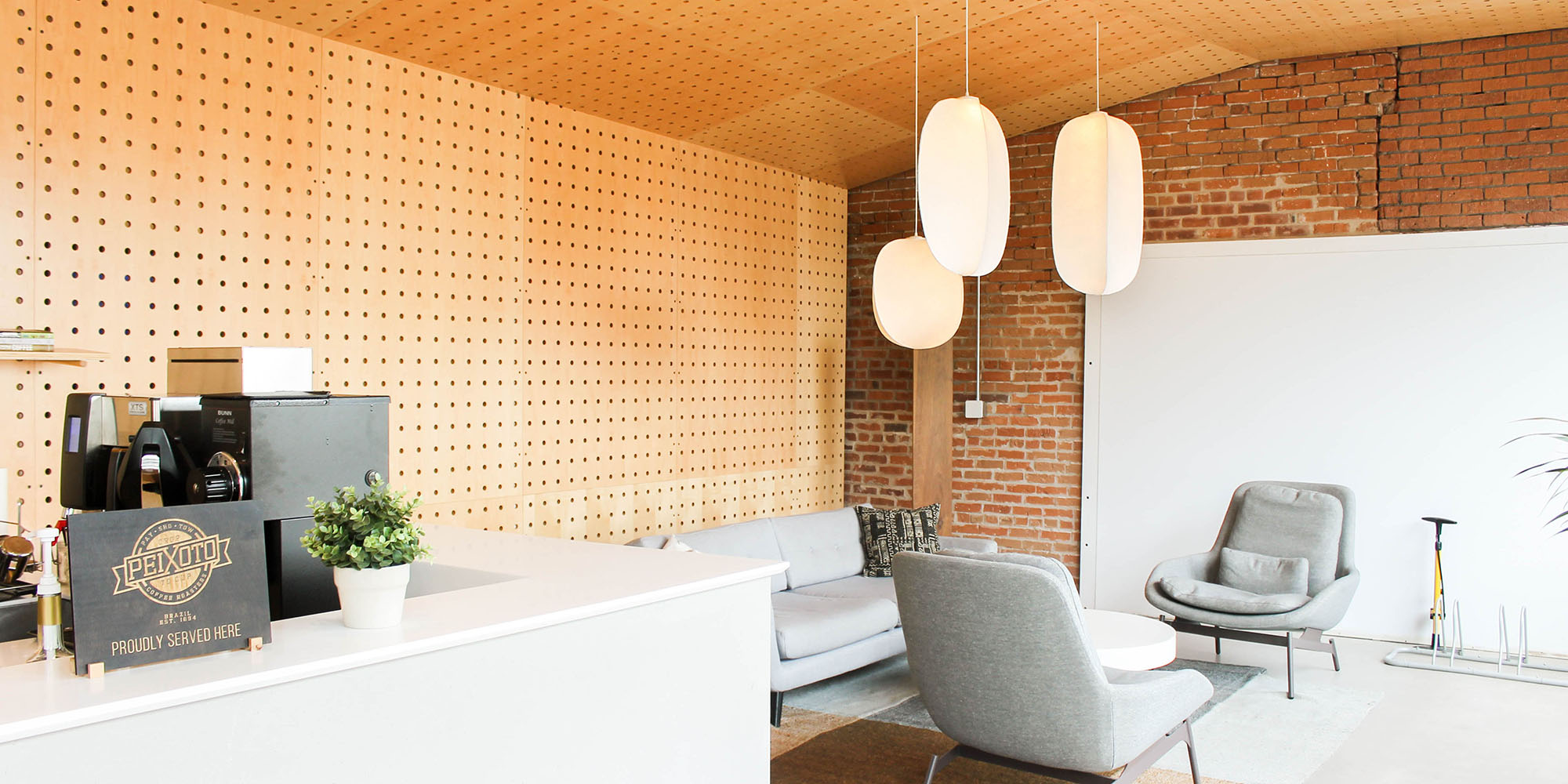 Tuft & Needle's headquarters is inside of a historic building on Grand Avenue in Phoenix. (Photo by Ashley Ballard/Cronkite News)

Park describes Tuft & Needle’s brick-and-mortar stores as an “educational experience,” citing the ability to interact with the product as one of the reasons for digital and in-person omnipresence.

“People have a misconception because of the price point or that (because) it comes in a box, it may not be as good,” Park said. “But when they come into the store, their perception completely changes.”

The design of these storefronts defies traditional retail space as well, offering semi-private rooms for customers to test out the mattress. The naturally lit space at its downtown Phoenix location offers an airy and minimalist atmosphere, a design that is coherent across all of its stores, as well as its headquarters, which shares a building with the downtown Phoenix retail location inside a historic building on Grand Avenue. 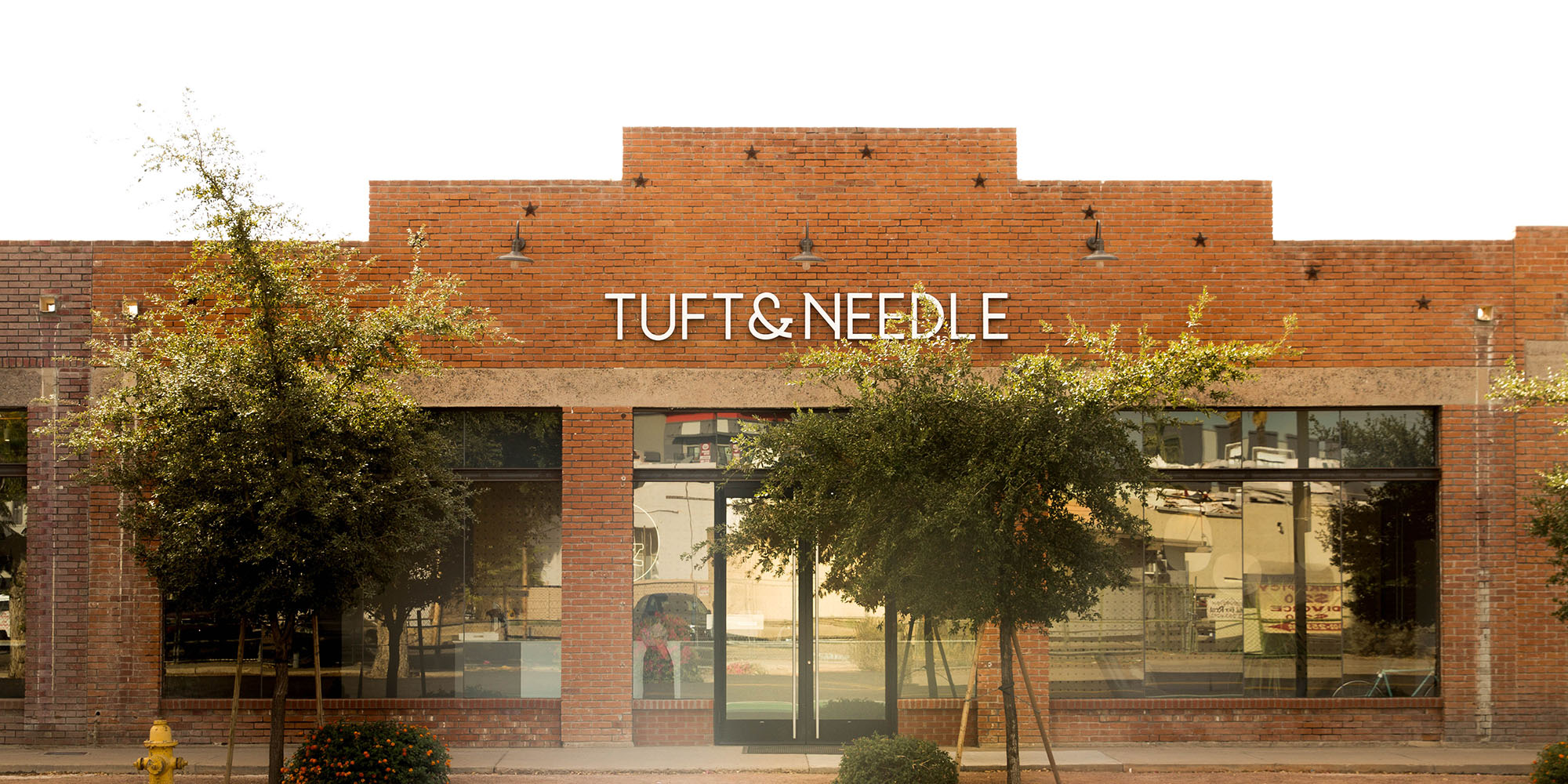 Tuft & Needle's headquarters and downtown Phoenix storefront is located off of Grand and 7th streets. (Photo by Ashley Ballard/Cronkite News)

As part of their training, retail employees must go to a traditional mattress store and create a “hate list” of aspects of mattress retail they did not like. In the Tuft & Needle store, they interact with the customers in a casual and conversational way and do not make commission.

“It is essentially an anti-mattress store,” Park said.

When asked if Mattress Firm’s description of Tuft & Needle as “aggressive” was accurate, Park smiled.

“We believe we are disruptors,” Park said. “So maybe aggressive could be an attribute of that.”