TEMPE — Social media has given bullies the power to hide behind keyboards for years and it’s not uncommon to see arguments and personal attacks break out in the comments section on Facebook. 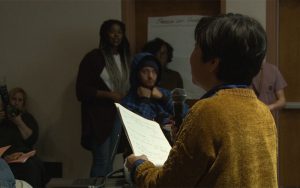 Kathryn Nakagawa is an associate professor at the School of Social Transformation at ASU. She was one of the speakers during a “Racism and Social Media” dialogue in Tempe on Tuesday, Nov. 28.
(Photo by Bridget Dowd/Cronkite News)

But as people all over the world are tearing each other down, the Center for the Study of Race and Democracy (CSRD) at Arizona State University is trying to make a positive change with its “Impact Arizona” series. It aims to address current events impacting Arizona communities and American society. On Tuesday night in particular, it was a “Racism and Social Media” dialogue.

Shai Gary is a fourth grade teacher at Liberty Traditional School. She said when she saw the event she knew she had to be there because about 95 percent of her students are children of color.

“I always try to tell them there are a lot of dangerous things on the internet and things that they probably shouldn’t see,” Gary said. “I’ve seen my friends kind of get attacked on social media about either something they did with a cultural group or a place that they went or even religion.”

Gary is no stranger to instances of racism and harassment, as a woman of color herself.

“I remember that elf on the shelf thing was happening and someone put at Tigger and you can probably guess the other word,” she said. “I was like ‘this is 2017 and this is still happening that people are still like that’s okay to use that term. That’s okay to share a picture of that.’”

Tuesday’s program provided a series of presentations, exercises and case studies. One of those case studies examined the responses from people on Twitter about Prince Harry’s engagement to Meghan Markle, a mixed-race American actress. Gary stood up to speak during that discussion.

“(Markle) is not given the recognition as a human, as a fully emotional, complete individual. She’s just seen as a black girl who’s marrying a prince,” Gary said. “She’s done amazing things. She’s still doing amazing things and people still have dehumanized her.”

Attendees were asked to evaluate how they currently use social media and to develop a 21 day plan for how they could use social media for change. CSRD program manager Sarah Herrera said this conversation is more important now than ever before.

“We are looking at a political administration that is utilizing social media as a form of communication,” Herrera said. “We are developing a space where people are going to be engaging with one another in those places in a way that maybe they weren’t before or maybe at a level that they weren’t before.” 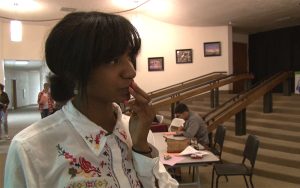 Shai Gary is a fourth grade teacher at Liberty Traditional School who attended the “Racism and Social Media” dialogue. She said about 95 percent of her students are children of color.
(Photo by Bridget Dowd/Cronkite News)

Roughly four in ten americans have personally experienced online harassment, according to a 2017 study by the Pew Research Center. Kathryn Nakagawa is an associate professor at the School of Social Transformation at ASU. As one of the speakers Tuesday night, she said people should learn to be racially literate.

“Just like we learn any other kind of literacy,” Nakagawa said. “We learn how to read and write. We need to learn how to talk about race also and that’s not easy to do. We don’t learn it in school very well. Usually racial conversations are either ignored or they’re sidestepped because it’s uncomfortable for people.”

Nakagawa has two biracial daughters who have experienced racism as well. She said if you see someone being attacked, message them individually to offer support and “don’t be a bystander” in the comments section.

“When we address somebody who has hateful comments, the way we can do it is from more of a position of compassion as opposed to trying to take them down,” Nakagawa said. “Which is something that happens particularly online- we’re trying to one-up somebody. The more that we can enter into spaces where we are exposed to perspectives that are different than our own, I think that’s important.”

Another CSRD event will be held tonight on the Downtown Phoenix Campus. People will examine race in the Star Wars film series. The films feature people of color and women as principal leads.

“People are looking for places and spaces to be able to connect with one another and be able to have conversations about challenging topics.,” Herrera said. “Providing people with the opportunities and spaces to do that- we believe is one of the first steps in how you move forward toward positive change.”

CSRD hosts dialogues on several other topics like their “Created Equal Film and Art” series. 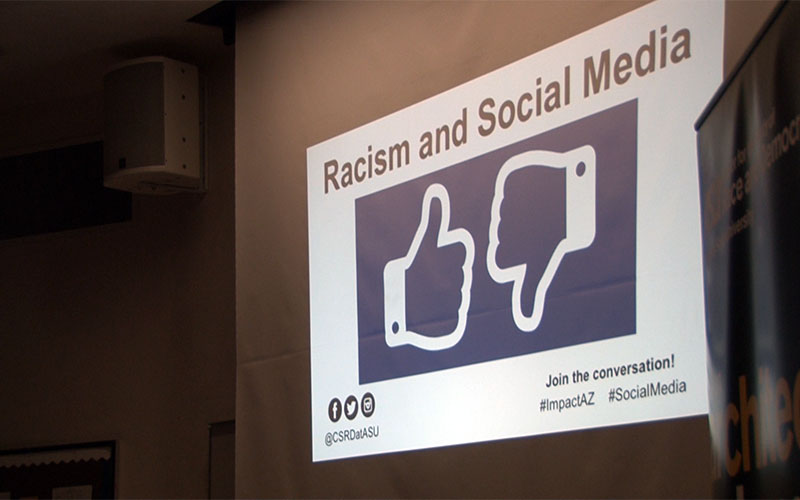 Center for the Study of Race and Democracy hosted a “Racism and Social Media” dialogue in Tempe on Tuesday, Nov. 28.
(Photo by Bridget Dowd/Cronkite News)