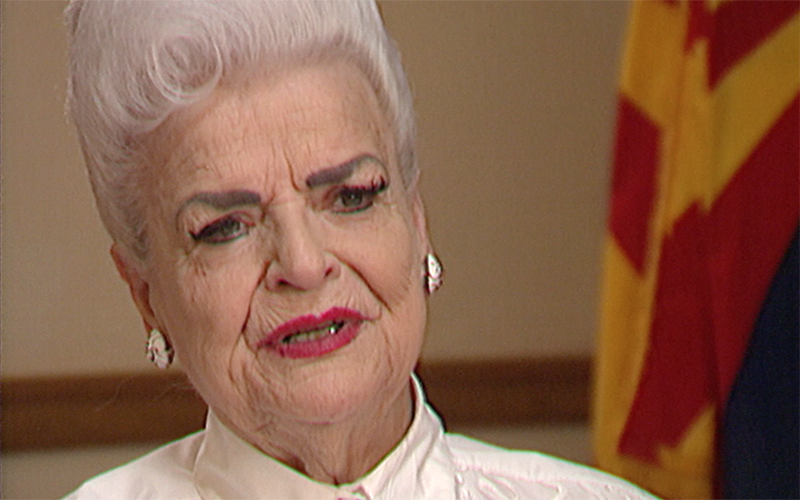 Mofford was secretary of state for 11 years before becoming Arizona governor in 1988, ascending as the state’s top leader in a tumultuous time. Evan Mecham, the contentious governor who drew national attention for blunt statements and his withdrawal of a state holiday for Martin Luther King Jr., was impeached for misuse of funds and obstruction of justice.

Republican Sen. John McCain noted Mofford’s status as a trailblazer who offered a “steady hand” despite coming to office under “unusual and difficult circumstances.”

“After such a divisive episode, she rose above the partisanship and brought Republicans and Democrats together to make Arizona stronger and more prosperous,” McCain said in a statement.

Recognized for her trademark white beehive and her moves to drive political cooperation, Mofford retired in 1991. She was a lifelong Democrat who spent 51 years in state government, according to azcentral.

She was born in Globe, an Arizona mining town, on June 10, 1922 as Rose Perica. She married Lefty Mofford and they later divorced, according to azcentral.

“Rose Mofford’s story is a truly unique Arizona story,” Gov. Doug Ducey, who ordered state flags to be halted at half-staff, said in a statement. “Rising through the ranks of state government to our state’s top office, she shattered a once-thought-unbreakable glass ceiling and served as an unparalleled role model to many. She was nothing short of an Arizona treasure, and will be deeply missed.”

Other Arizonans who knew Mofford – personally or by reputation – shared condolences and memories.

“When she became Arizona’s first female governor, her calming leadership was just what our state needed during a tumultuous time,” Phoenix Mayor Greg Stanton said in a statement. “We should all emulate her style, which always reached beyond politics to bring people together to solve problems.”

Arizona Congresswoman Kyrsten Sinema said Mofford “embodied the true meaning of public service – a tireless, thoughtful leader who always put the people of Arizona first.
“She was a trailblazer and an Arizona legend. She was a dear friend and role model for me. Governor Mofford’s legacy will live on in Arizona forever,” Sinema said in a statement.

Alfredo Gutierrez, who served on Mofford’s transition team after he had left the state Legislature, told 12 News she was a treasure.

The Washington Post quoted former Arizona Attorney General Grant Woods as saying Mofford didn’t necessarily seek a spotlight but took on the responsibility handed to her with grace.

“She stepped up when she needed to step up,” Woods told the Post.