Cars wait in line for inspection at the Mariposa Port of Entry in Nogales. The port underwent a $250 million upgrade but some trade groups say it has not lived up to its promise. (Photo courtesy of Customs and Border Protection) 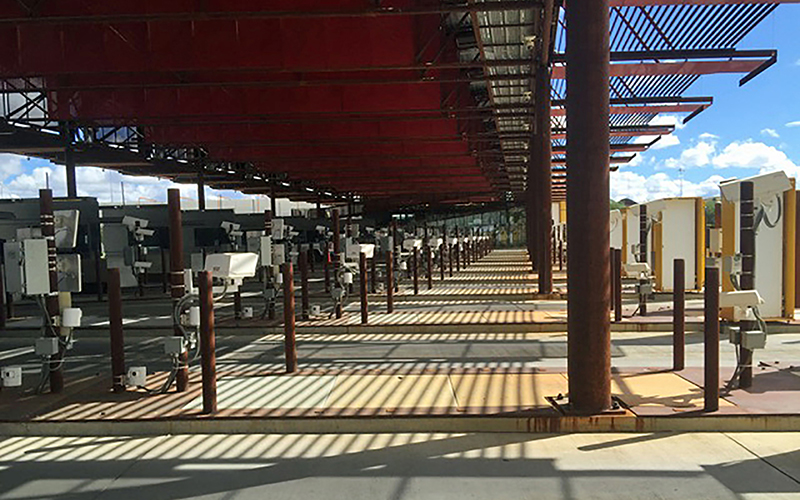 Border officials have struggled to keep the Mariposa Port of Entry staffed to capacity due to a long hiring time and high turnover rates, according to the director of the Nogales Port. (Photo courtesy of Customs and Border Protection)

WASHINGTON – Nearly two years after the completion of a $250 million expansion that was supposed to speed traffic through the Mariposa Port of Entry in Nogales, some say the project has yet to live up to its promise.

But staffing shortages have left Customs and Border Protection officials unable to keep all lanes open outside certain peak hours, leading to delays the expansion was supposed to eliminate.

“They doubled Mariposa’s capacity but they’re unable to keep lanes open to let produce in,” said Russ Jones, chairman of the Border Trade Alliance. “GSA (the General Services Administration) made an investment in a newer, more efficient port of entry, but Arizona is still losing produce to Texas because of long waits at Mariposa.”

Jones and others blamed a lack of staff for the lane closures at Mariposa.

While the GSA funded the expansion, Congress did not provide funds to hire additional Customs and Border Protection officers to staff the new lanes. The problem has been aggravated by high officer attrition rates in Nogales and long hiring process for replacement officers.

The port has instituted an “all hands on deck” policy during peak times to keep all lanes open. But it struggles to adequately staff lanes outside those times, said Guadalupe Ramirez, the director of the Port of Nogales, which includes Mariposa as well as the Deconcini and Morley Ports of Entry.

Congress did add funding for CBP to hire 2,000 new officers in 2014. About 150 of those hires would go to Arizona, and close to 100 of them would go specifically to Nogales, Ramirez said.

But he said that even after these hires, Mariposa is still suffering from a shortage of officers due to an extremely high officer turnover rate.

Nogales traffic compared to other Southern Ports
Create your own infographics

Rural ports like Nogales have a hard time keeping officers for more than three years, because many officers who come to work there quickly decide to move back home closer to their families, Ramirez said.

“You’re not going to find a port director that will say they have all the resources they need,” Ramirez said. “The challenge for the Southwest border is that if you’re not from here, you’re going to try to go home.”

While Customs and Border Protection has instituted recruiting efforts and incentive programs for officers who stay on the job for more than three years, the agency has been grappling with another personnel problem.

A year ago, it took about 18 months to hire a new Customs and Border Protection officer. The agency has worked hard to reduce that timeline, through the creation of “hiring hubs” and encouraging the hiring of veterans, among other moves, so that now it takes about six to eight months to bring someone on board.

But Rep. Martha McSally, R-Tucson, and others say that’s still too long. The delays are causing the agency to lose out on good candidates and preventing it from responding to staffing shortages quickly and effectively, McSally said.

“Nobody can wait 18 months to pay their bills,” McSally said. “Hiring hubs that bring many of the 11 steps (to hire an officer) together in one place have brought the timeline down, but my goal is to get the hiring time for veterans down to 90 days.”

Former Border Trade Alliance Chairman Sam Vale said Congress needs to share some of the blame for the delays as well.

Problems at the agency “may be a part of the issue, but they need oversight and appropriations,” Vale said. “They need a phasing in of all the resources they need (from the federal government).”

The agency still has a ways to go, according to Ramirez, to face the challenges that have been presented to it in the last decade.

“September 11 changed a lot of things for us,” Ramirez said. “The process now takes a long time. What once took a half of a minute now takes one and a half. Multiply that by the thousands of vehicles that come through and it does cause a delay.”