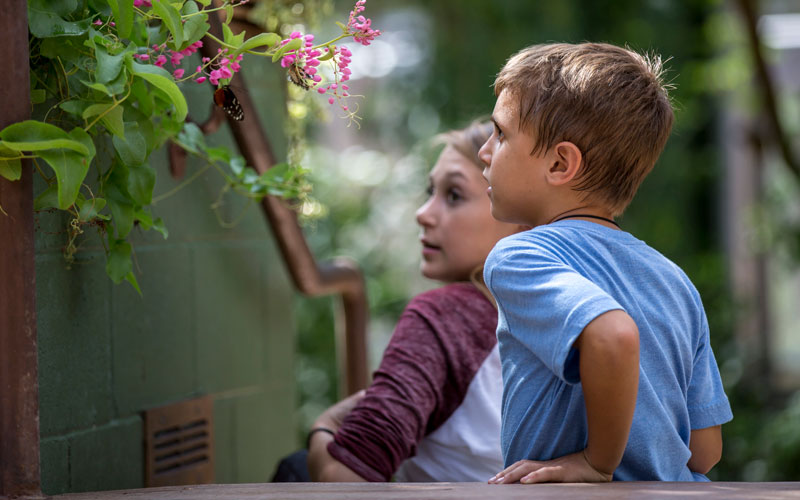 Collin Peters, 6, and his sister Madelyn Peters, 13, look at the butterflies up close. (Photo by Carla León/Cronkite News)

The Monarch butterfly travels thousands of miles to reach the overwintering sites in Mexico. (Photo by Carla León/Cronkite News)

“In Iowa alone, they’ve lost sixty percent of their habitat in that one state and then there’s the possible deforestation of the wintering sites that they have called home for hundreds of years,” said Adriane Grimaldi, Director of Education at Butterfly Wonderland,

Monarchs are among the most beloved butterflies at Butterfly Wonderland, the largest rainforest atrium in the United States.

This time of year they’re also seen migrating through Arizona on the way to their winter home in Michoacán, Mexico.

“The velocity of a raindrop can hurt the wings of the butterfly,” Grimaldi said. “When we see a butterfly, we truly are seeing a survivor.”

But that survival is threatened. The Monarch butterfly population has dropped from 1 billion to less than 60 million in North America in the last decade.

Butterfly Wonderland works to educate people of all ages about the plight of butterflies.

“We have over 50 different species and these are tropical butterflies from Costa Rica, Malaysia, Thailand, and it’s just a privilege to be able to share that with people, here in Scottsdale,” Grimaldi said.

And the butterflies inspire many visitors.

“I like to bring her here because it is peaceful, and it is enchanting, and to expose her to the beauty of the world,” said Melissa Dudinyak, who took her 1-year-old girl, Ruby Dudinyak, to explore the indoor rainforest.

Madelyn Peters, 13 and her younger brother Collin 6, stared in amazement at the small, fragile creatures.

“This is our second time here,” said Madelyn. “My mom loves butterflies and it was a half day at school and we figured we would come.”

The migration of majestic orange and black Monarch butterflies is one of nature’s mysteries. They travel about 3,000 miles to a winter haven in Mexico —where hundreds perch in fir trees with fluttering wings.

The National Fish and Wildlife Foundation (NFWF) created a $3.3 million 2015 Monarch Butterfly Conservation Fund to “to protect, conserve and increase habitat for these iconic insects and other pollinators.”

And there are steps ordinary citizens can take to help Monarch butterflies in the U.S.

“We always encourage people to plant milkweed because that’s the one thing they can due to make a difference with the monarchs,” Grimaldi said.

Monarch caterpillars feed on Milkweed before they transform into the beautiful butterflies that migrate every year from Canada through the U.S. to Mexico.

“These guys are mysterious to us. We really don’t know why they go where they go,” said Grimaldi.