A little more than 45 percent of all births in Mexico are Cesarean sections, which makes it one of the world’s leaders in the practice. Mexico’s rate of C-sections is 30 percent above the rate recommended by the World Health Organization. It is the primary method used in hospitals.

However, some families who can afford it are turning to more traditional, natural methods of childbirth, including the use of midwives.

Depending on their focus and training, midwives can provide a range of services, both physical and spiritual. Many use traditional methods learned from Mexico’s indigenous people. 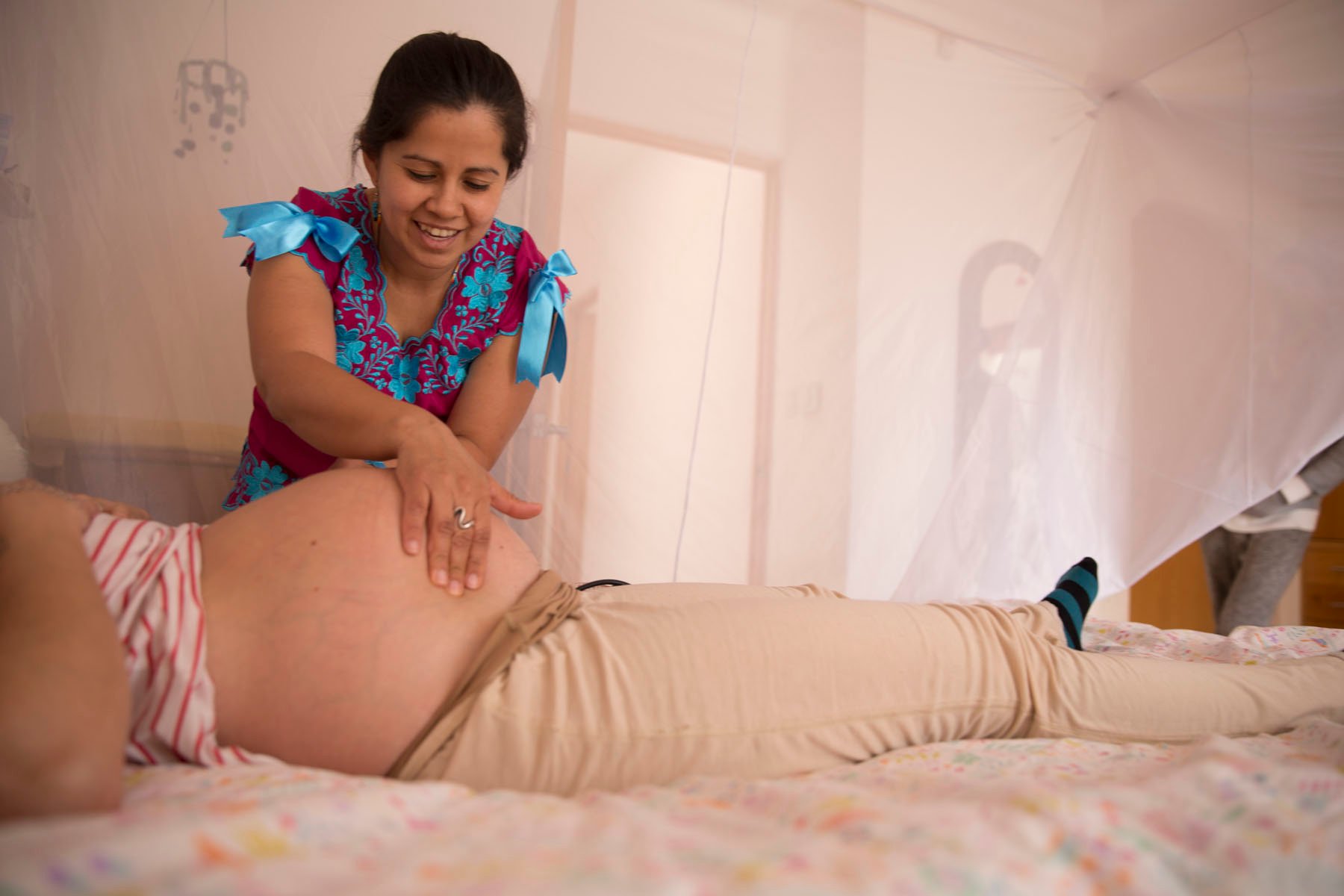 Midwife Erika Jocelyn Gonzalez performs a routine check-up on a home visit with a mother who is full-term in Queretaro, Mexico. Gonzalez is certified traditional midwife and a co-owner of Nacer a tu Manera (Birth Your Way), a company run by midwives who promote natural home births and traditional practices. The mission of the Queretaro-based company is to give women control and power make their own decisions about the way their children will be born. She and other midwives contend most Cesarean sections performed in hospitals are unnecessary and result in pain and complications for both mothers and babies. 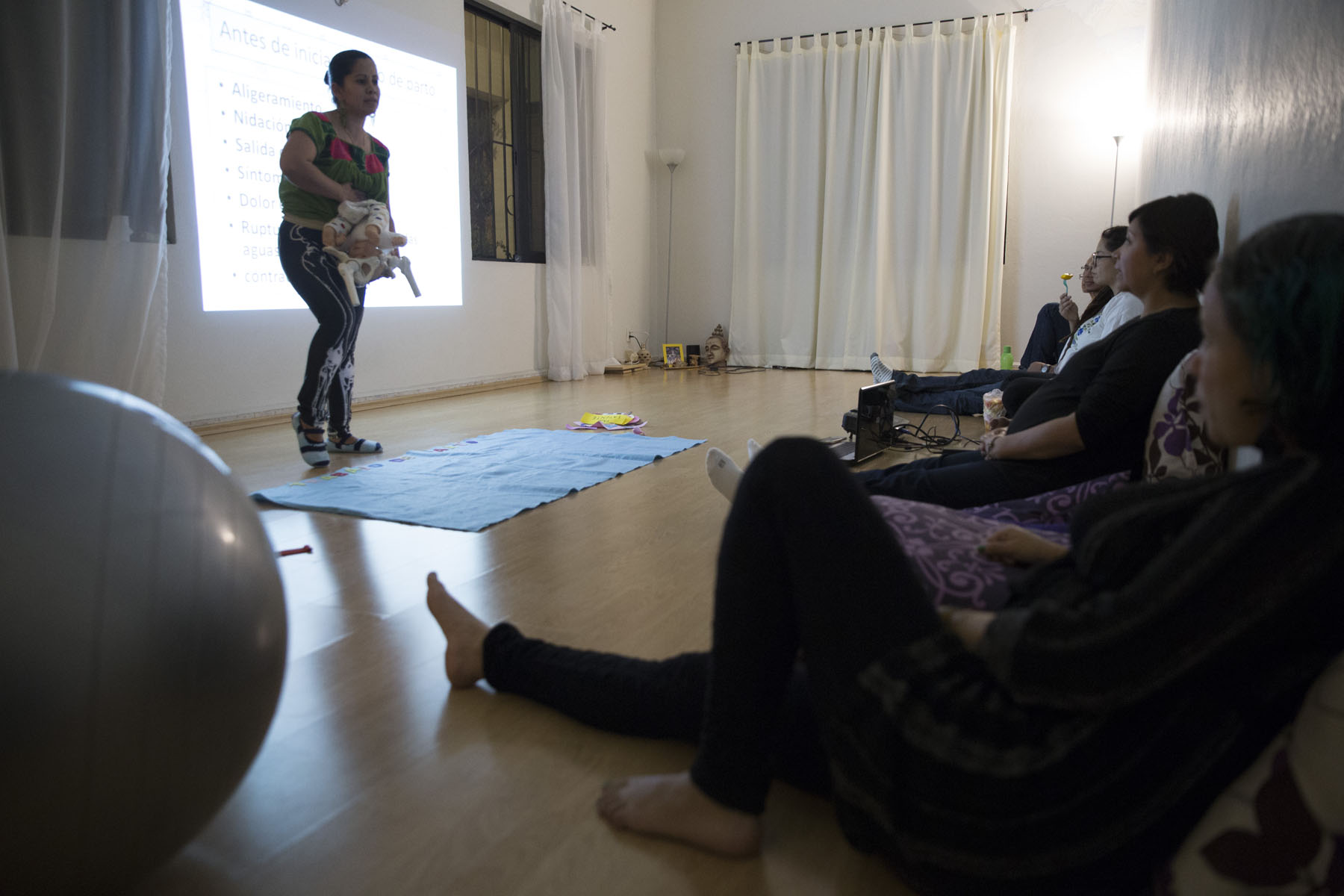 Gonzalez grew up in Mexico City and originally planned to study contemporary medicine but soon realized her true passion was midwifery. She studied with traditional midwives in indigenous areas in Oaxaca and Chiapas, Mexico. Today, she educates women on pregnancy, and recommends that expectant mothers and fathers start attending classes in week 20 of their pregnancy. 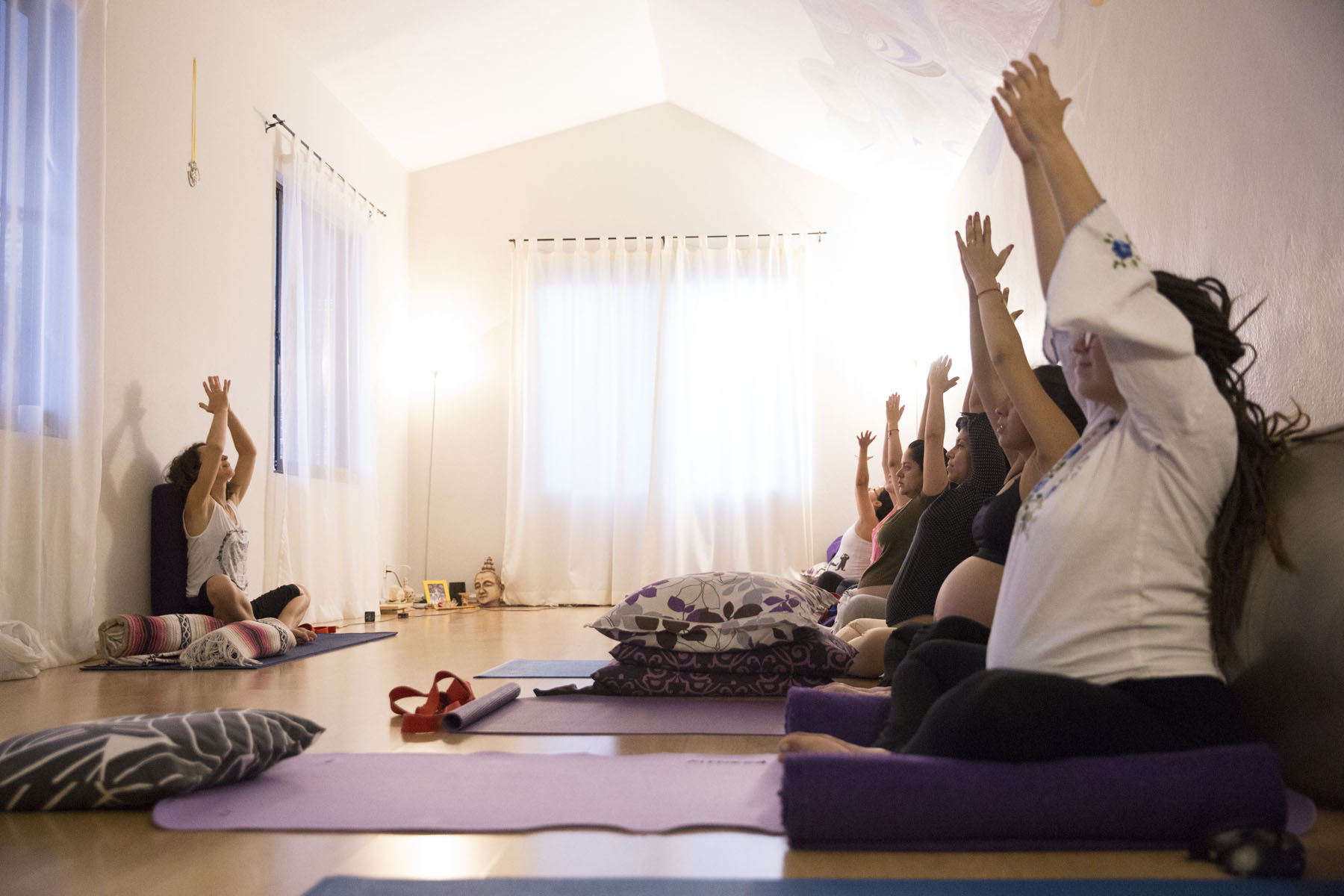 Midwives from Nacer a tu Manera recommend that mothers take part in prenatal yoga as a way to connect their bodies with the baby’s body. “The baby is the teacher,” they say, the baby will lead the mother through the process and the mother must simply listen. The timing and length of the labor is left to the infant and mother. 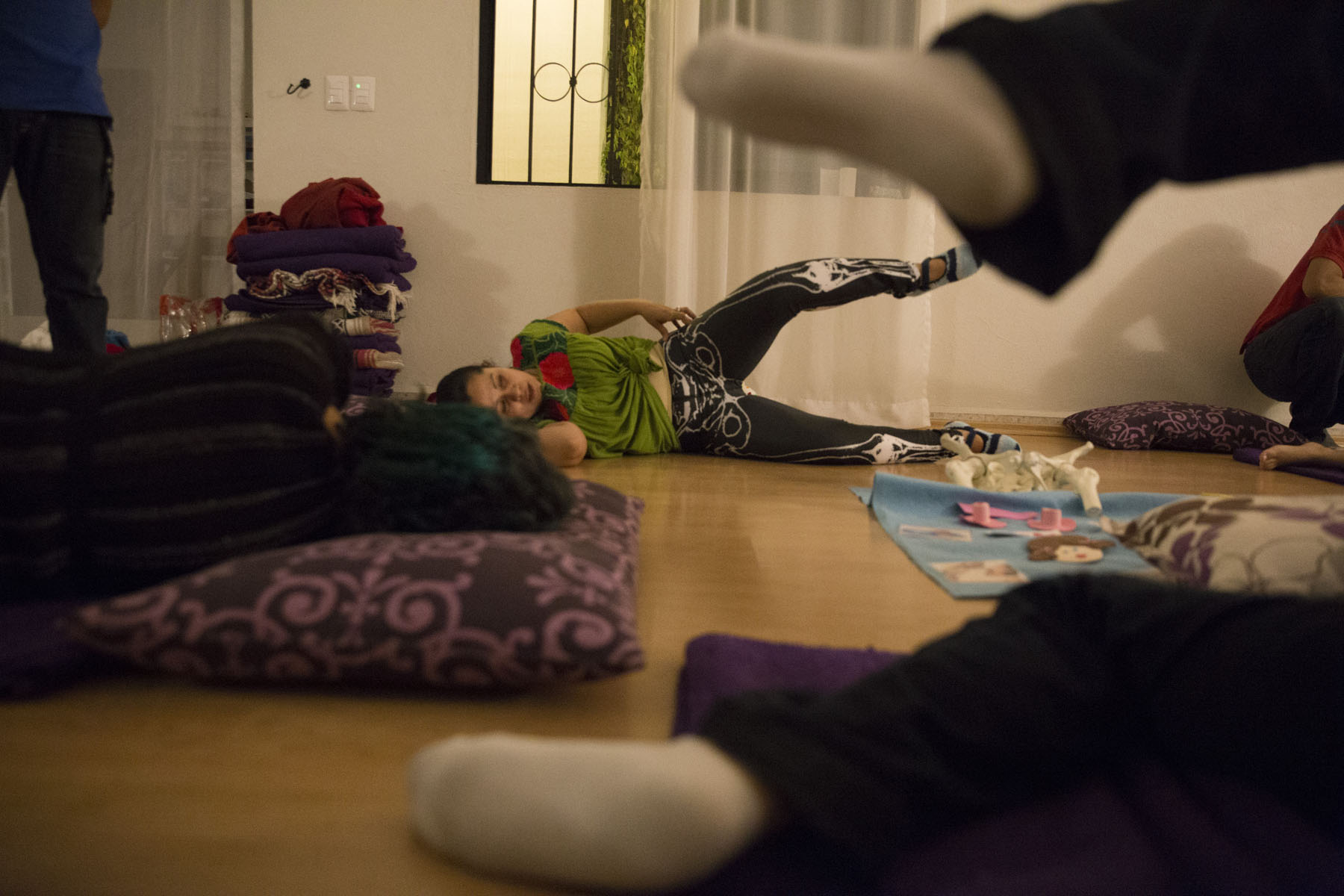 Gonzalez demonstrates birthing poses that women can use during contractions. Gonzalez promotes the idea that couples are pregnant together and strongly encourages both parents to attend classes and check-ups together. Gonzalez says many mothers who choose midwives have had negative or even traumatic experiences in a hospital or believe that having a baby in a hospital will lead to an unwanted Cesarean section. 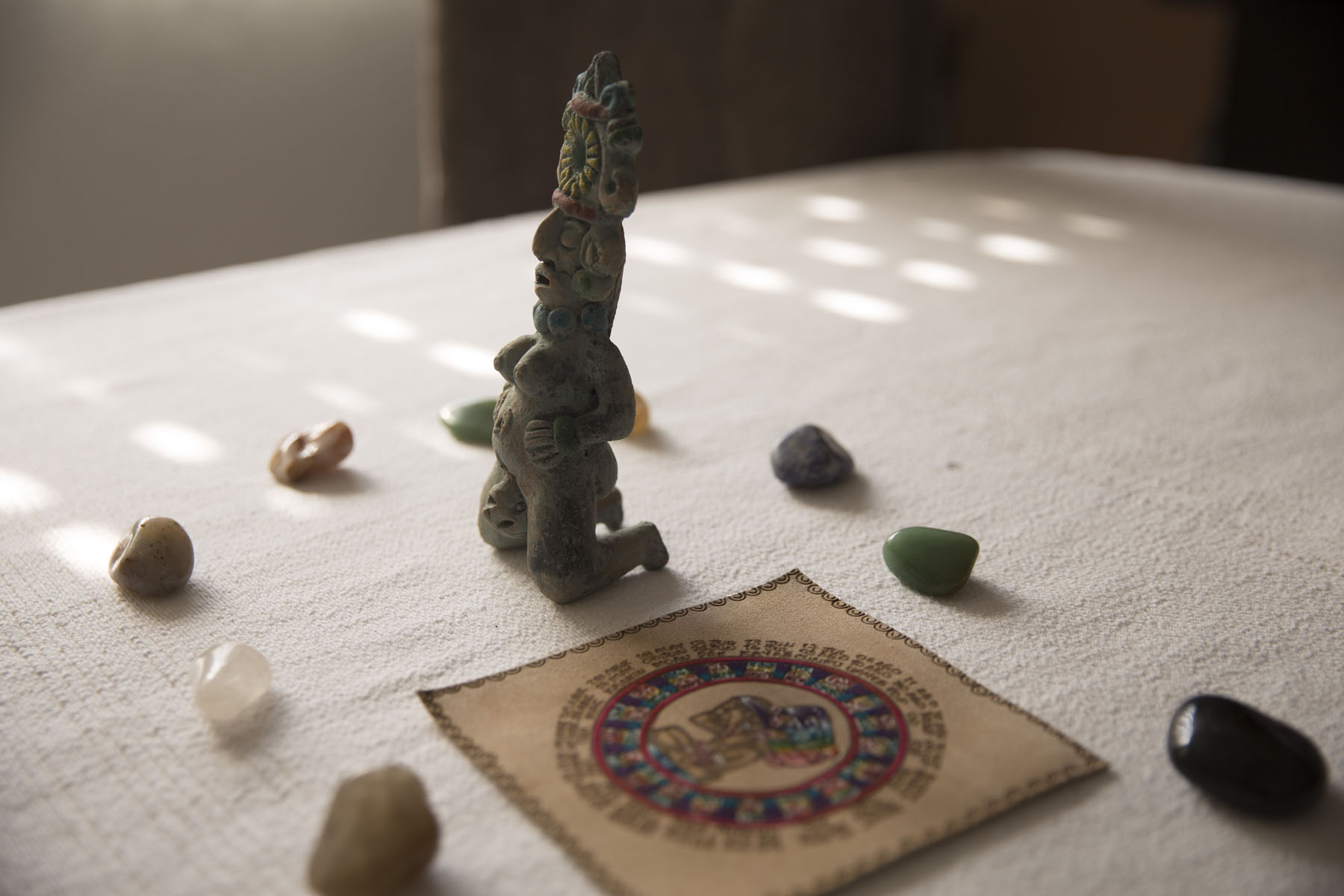 A representation of the Mayan goddess of midwifery and medicine, Ixchel, sits on Gonzalez’ table as she sets up to preserve a placenta from a delivery she performed two weeks previous. This goddess is believed to be the guardian of the birth portal and is meant to protect the placenta. 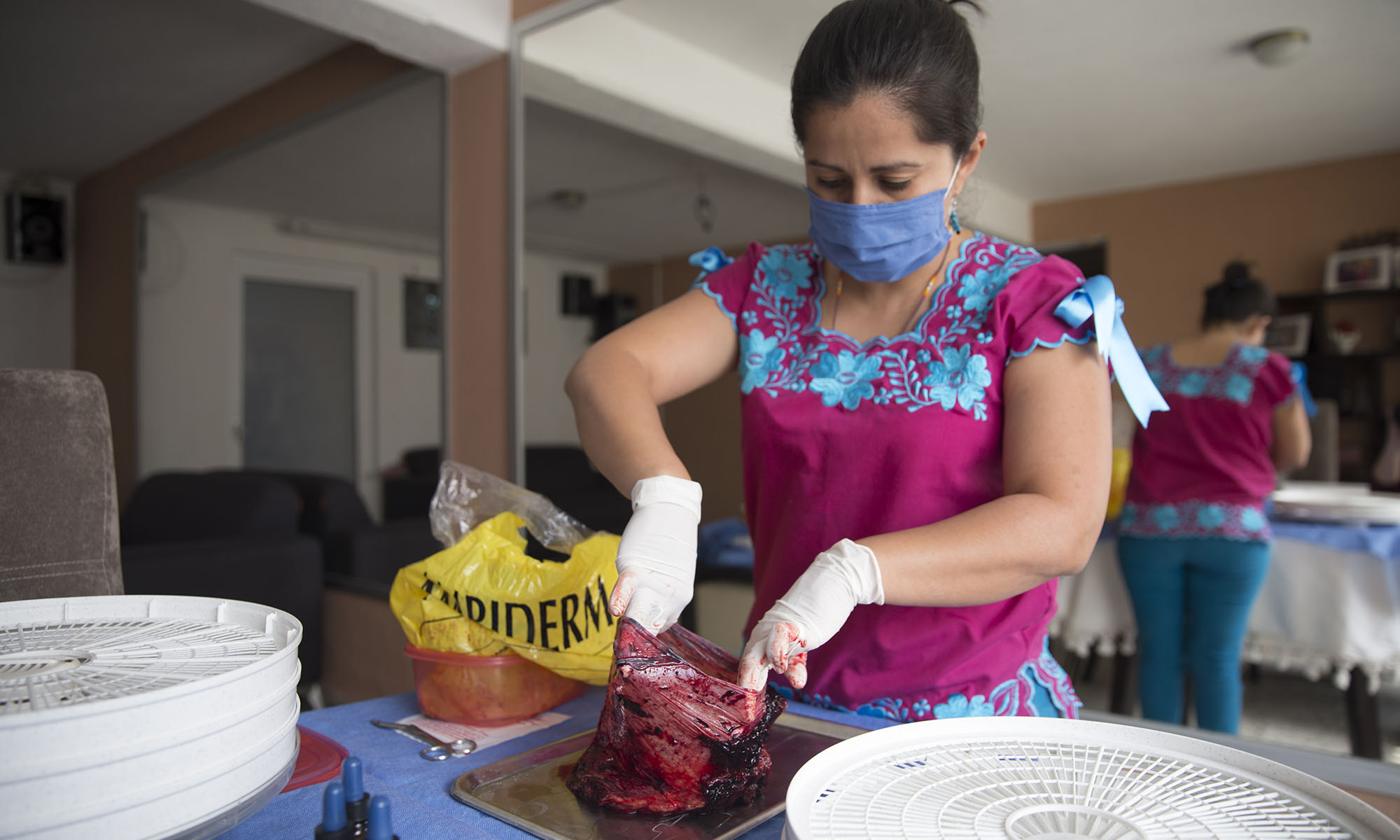 Gonzalez retrieves the two-week-old placenta from the plastic bag, and places it onto a tray for preparation. Before preparation Gonzalez stores placentas in sealed plastic ware and refrigerates them. She and her clients believe the placenta has spiritual and medicinal value. After inspection, the placenta is pulled apart into small pieces that are placed in food dehydrator for a for 14-hour drying process. Once dried, the pieces can be ground up into a fine powder which the family can use in various medicinal applications. 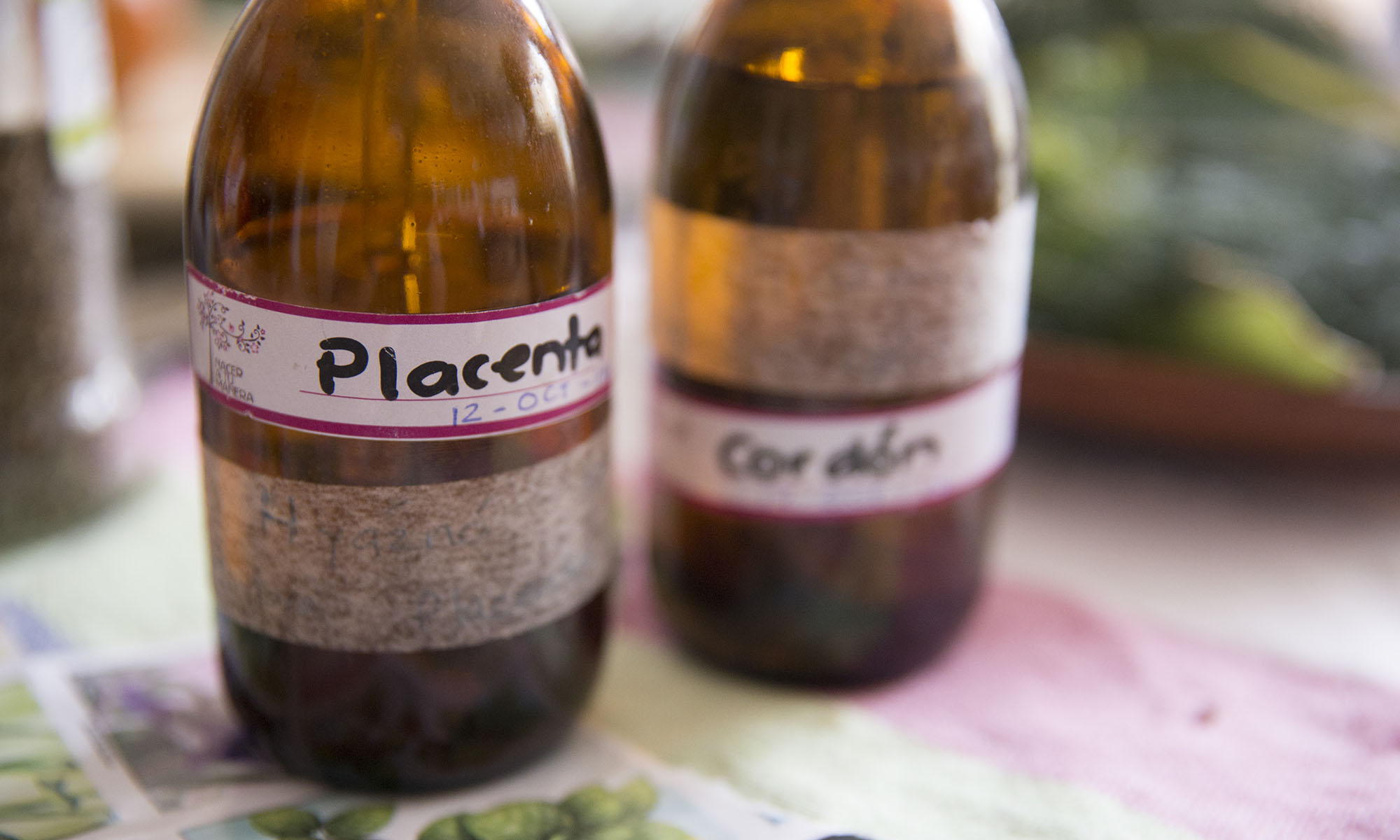 Gonzalez also places pieces of the placenta into liquid solvent to create a tincture, which is often used as medicine or a nutritional supplement. The owners of this set say they have used both the placenta and umbilical cord solutions during times of sickness and have seen better results from the placenta solution. 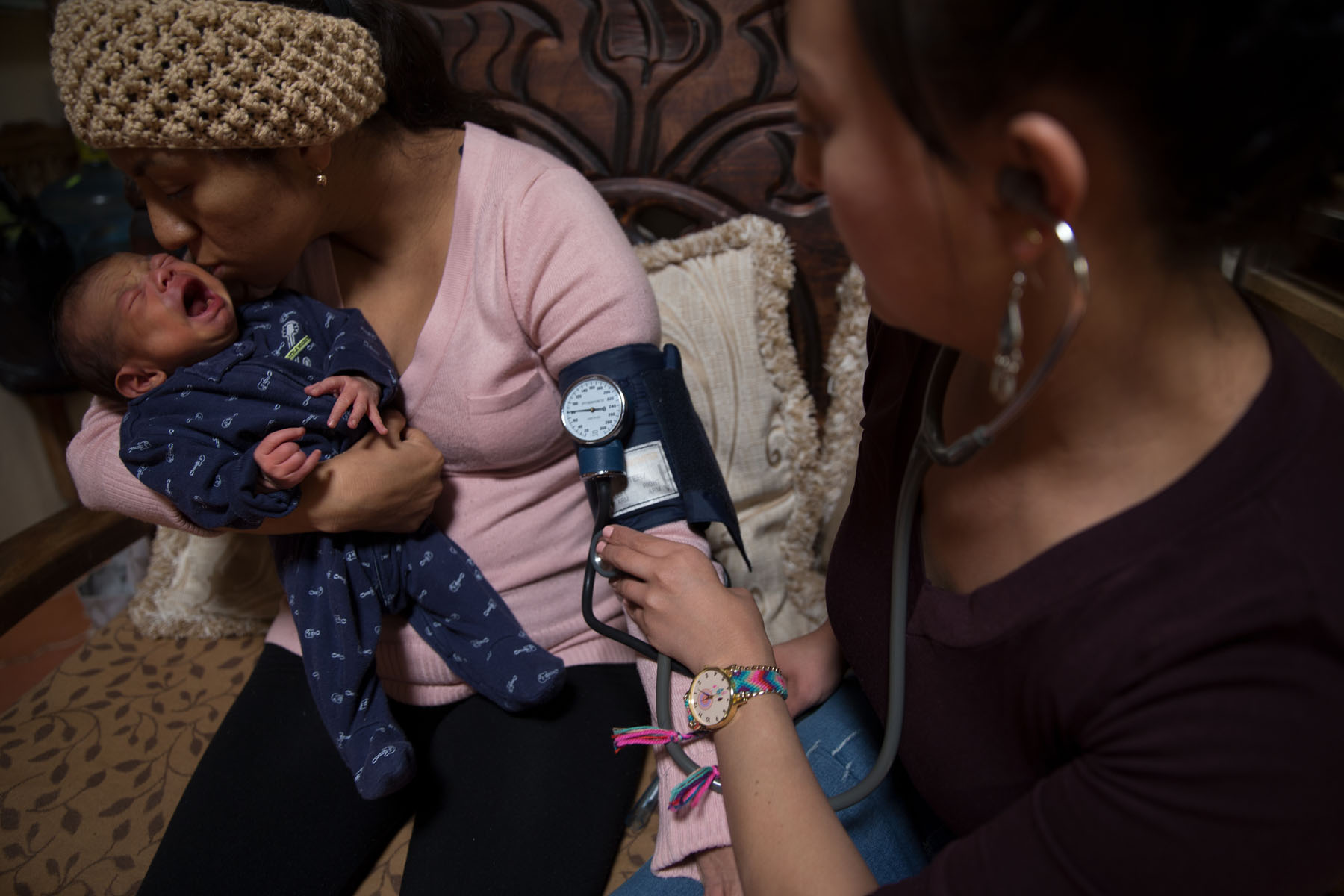 Nacer a Tu Manera Midwife Maricruz Juarez performs a check-up on mother Adriana Dia Cruz just two weeks after her son Samil’s birth in Queretaro, Mexico. Gonzalez and Juarez often pair up to go on appointments. During this visit they will perform a postpartum “closing of the womb” ceremony with Dia Cruz. 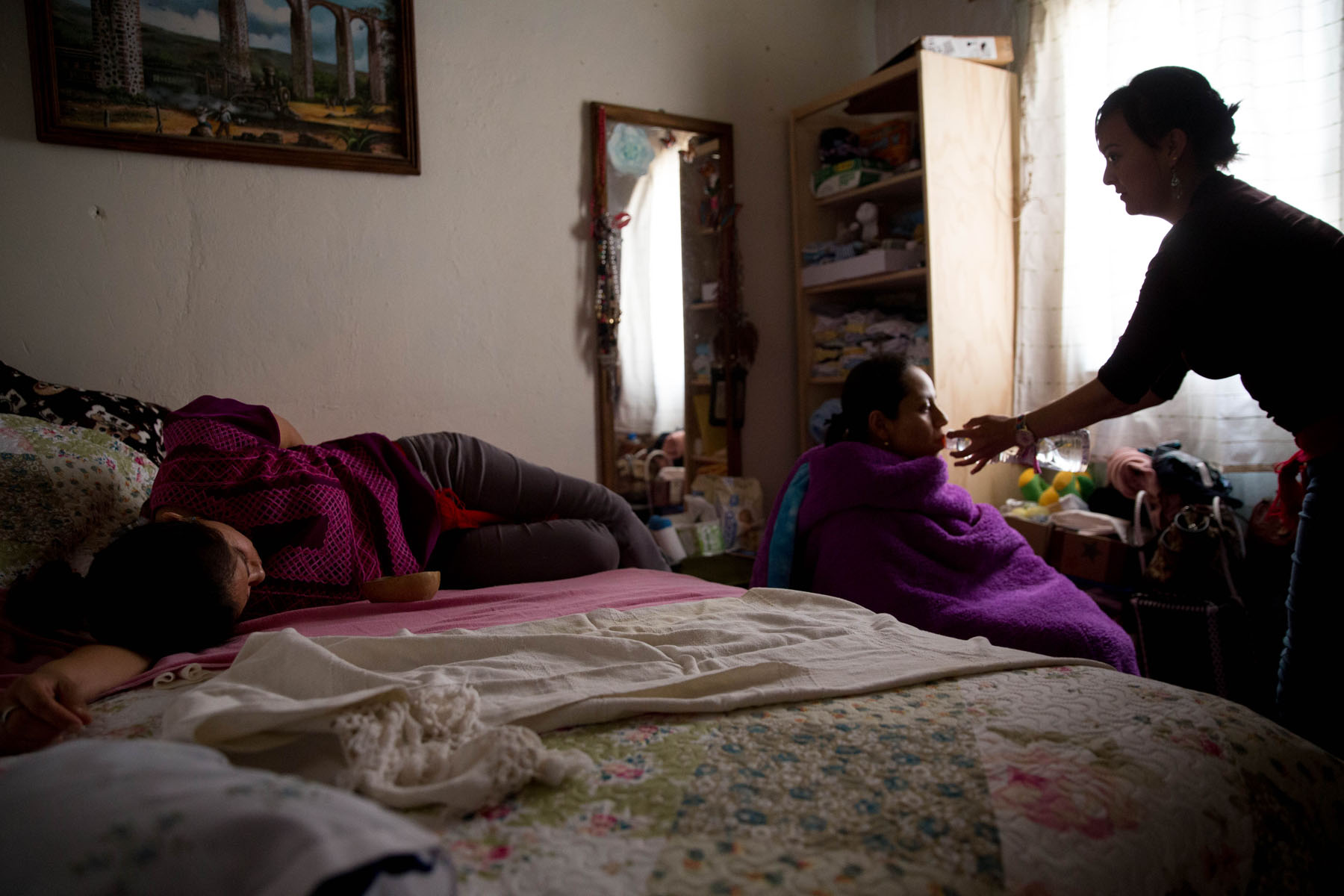 Juarez gives water to Dia Cruz as she sits in a tub of hot water during the closing of the womb ceremony, while Gonzalez lies on the bed, exhausted from performing a delivery at 4:30 a.m. earlier that day. The ceremony symbolizes the final phase of pregnancy, symbolically closing the womb and thanking the body for the work it has done. 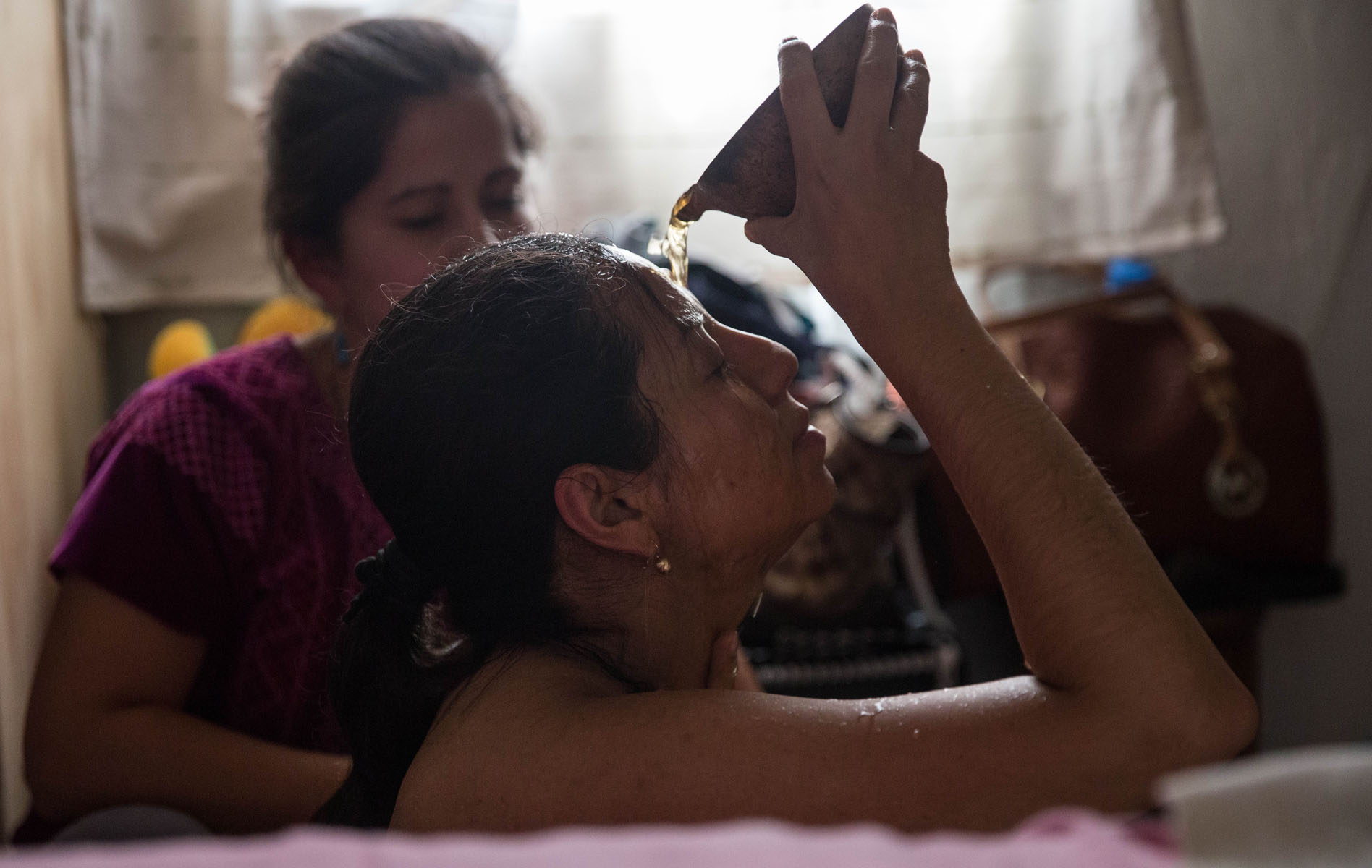 Dia Cruz pours water over her head to ensure that every part of her body is cleansed during the ceremony. 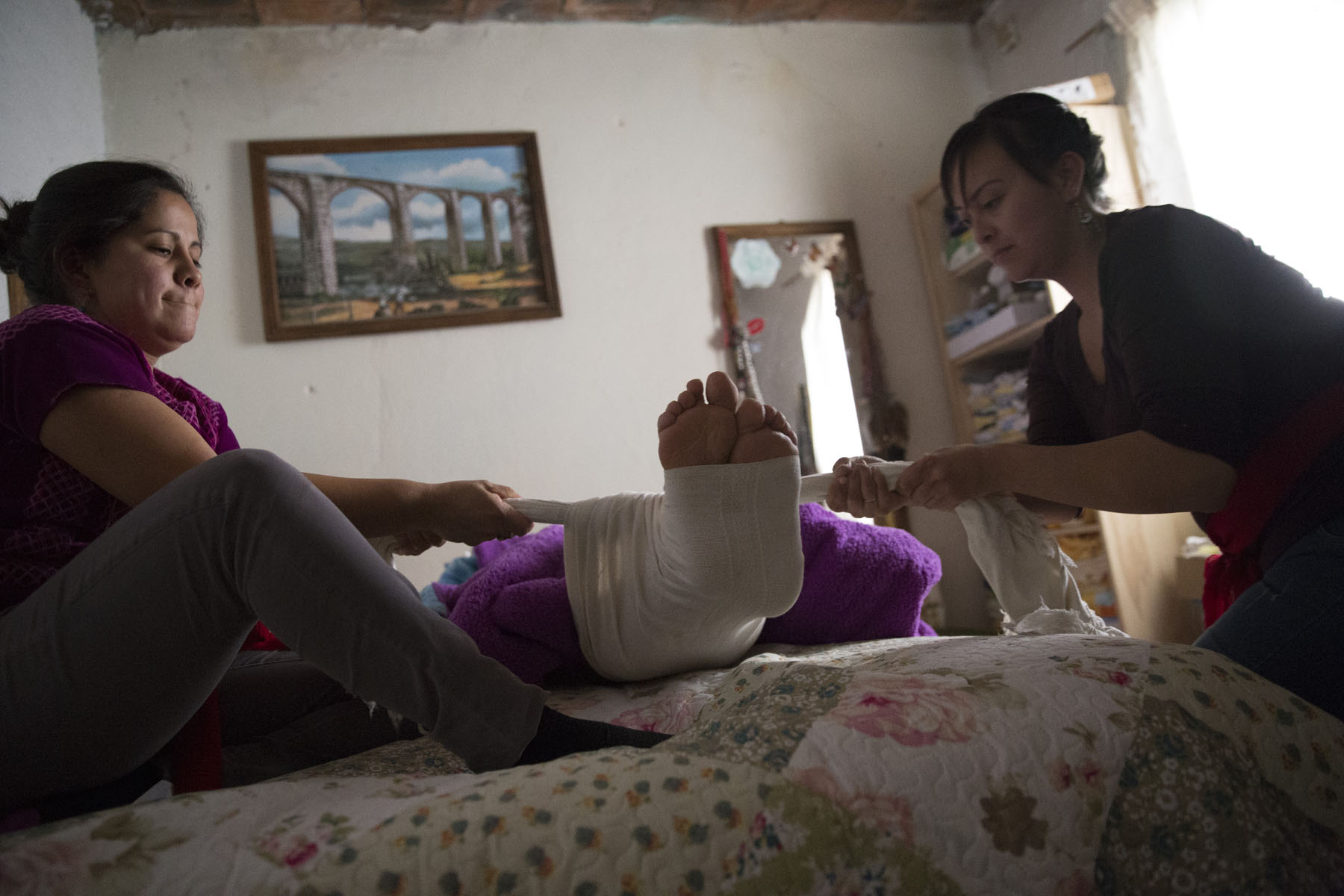 Once she is out of the tub, the midwives cover Dia Cruz with a warm blanket and begin to apply lotion to her legs, which they then bind with cloth as tightly as possible to symbolize the closing of the uterus. This process is continued all the way up her body. 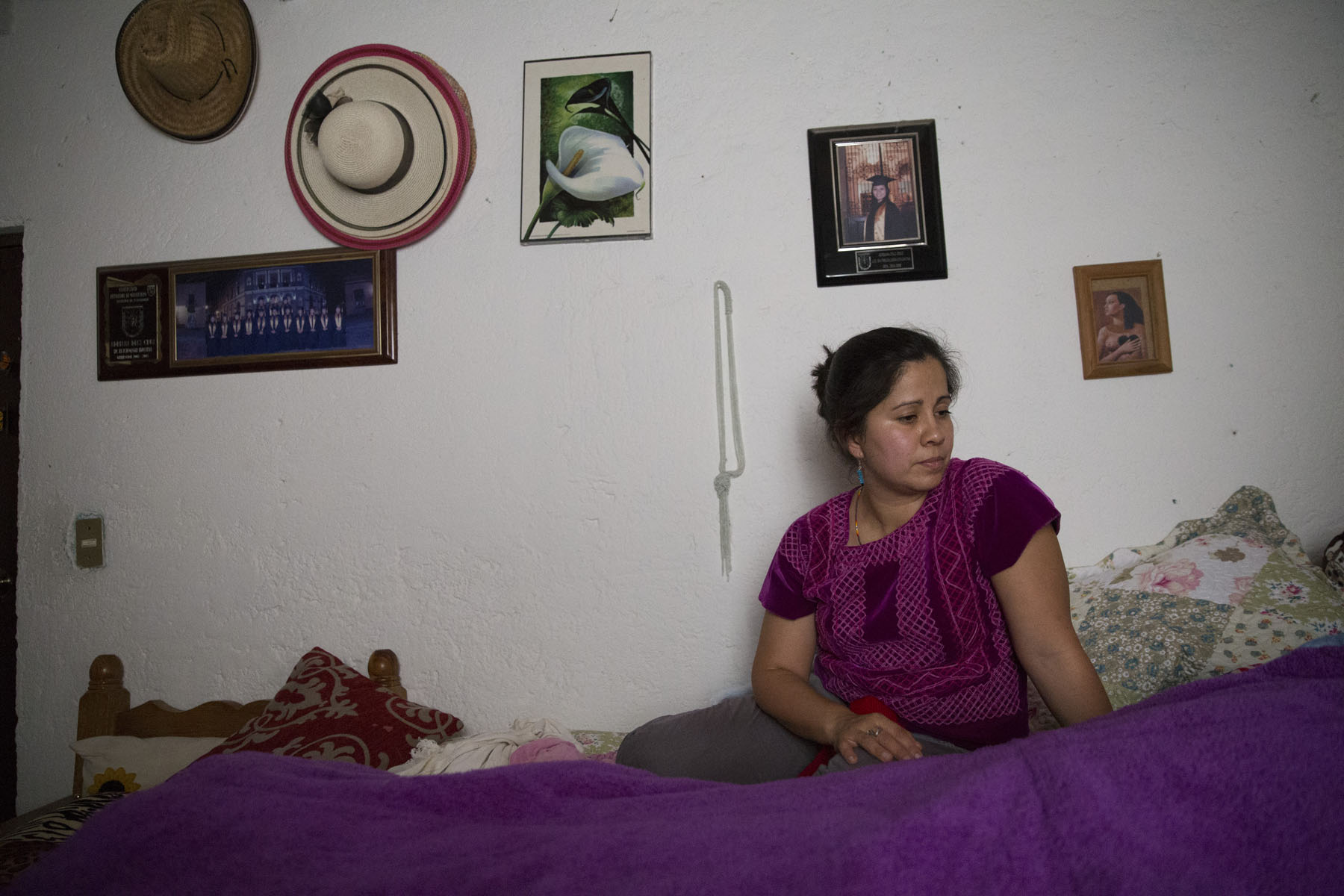 Gonzalez watches over Dia Cruz as the ceremony comes to a close. Gonzalez says the traditional methods she uses heals patients physically, emotionally and spiritually. 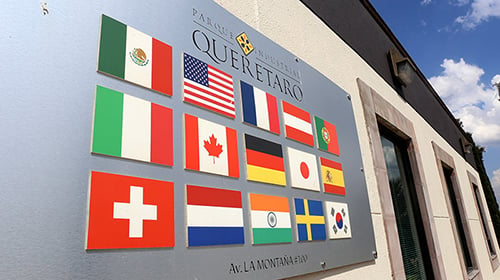 Mixed feelings on NAFTA in Mexico

Mexican critics of NAFTA think their government should take a hard look at its shortcomings, particularly in the area of poverty. 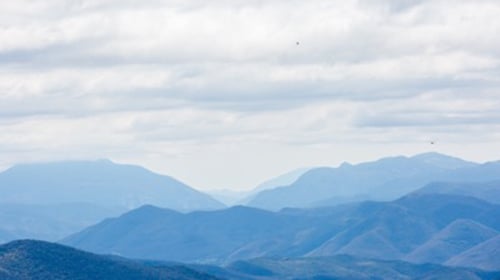 Competing visions collide as Mexico seeks to balance conservation with tourism and economic development in a national land preserve. 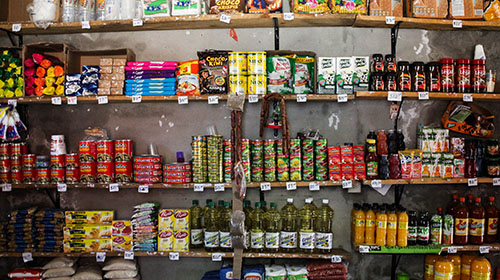 Taxes on remittances would devastate poor in Mexico

President Trump has threatened to block or tax remittances from Mexico, which could negatively affect millions in Mexico. 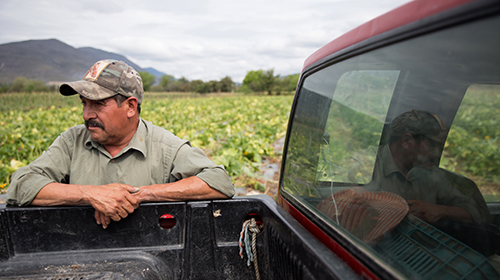 Mexico considers boycotting U.S. corn to battle NAFTA threats and boost the country’s own farmers of the crop, who have been overwhelmed by U.S. imports. 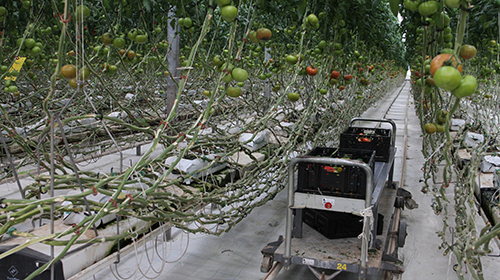 A network of strategically placed agro-industrial parks could be the key to Mexico’s future economy. 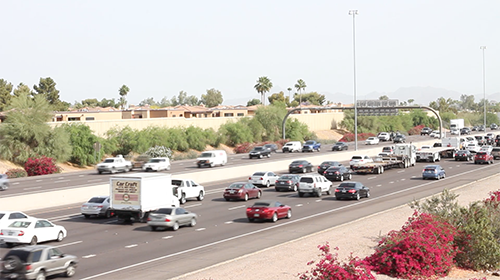 Saving the mountains while helping the poor in Mexico

Local villagers and ecologists team up to protect, conserve and re-forest one of Mexico’s most biologically important areas - the Sierra Gorda mountains. 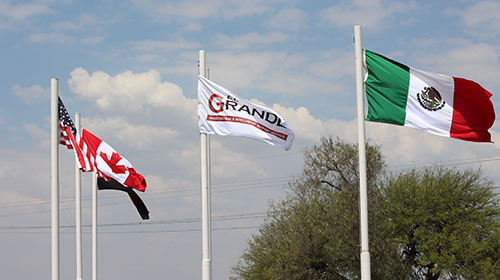 NAFTA changes would affect both sides of border

NAFTA has linked U.S. and Mexican manufacturing to such a degree that changes could have substantial effects on both sides of the border. 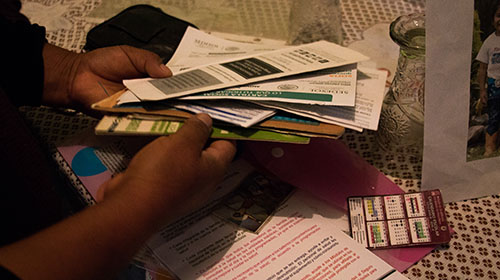 A government program tries to tackle poverty in a country where more than half of its 130 million residents are poor. 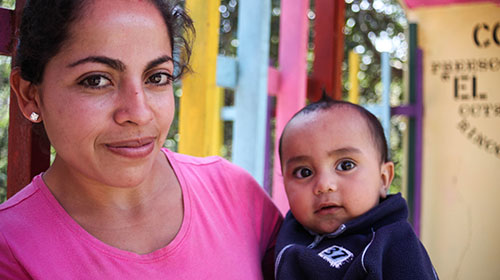 Mexican families rely on money from providers in U.S.

Remittances from immigrant workers in the United States are a mainstay for Mexican families - and the nation’s economy. 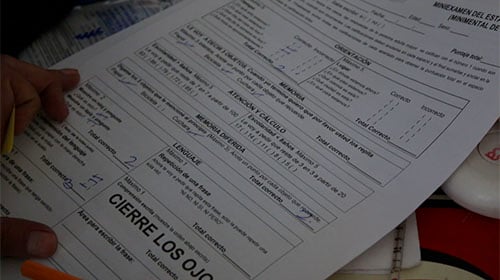 Taking health care to people who need it most 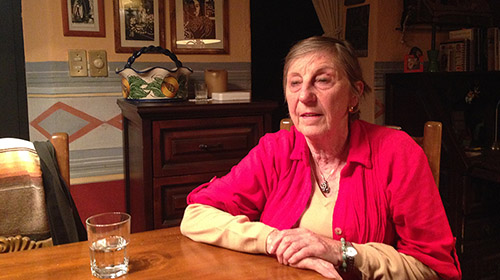 Deported welcomed by locals and Americans in Mexico

American expats join forces with locals to help immigrants who have been deported from the United States. 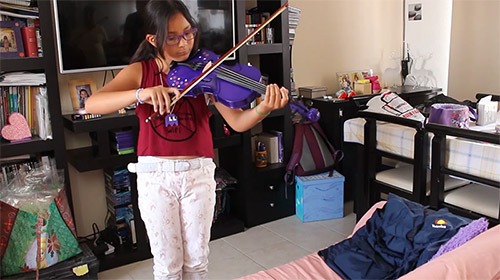 Manufacturing and tech jobs in industrial hubs such as Queretaro have created a new Mexican middle class, lifting thousands out of poverty. 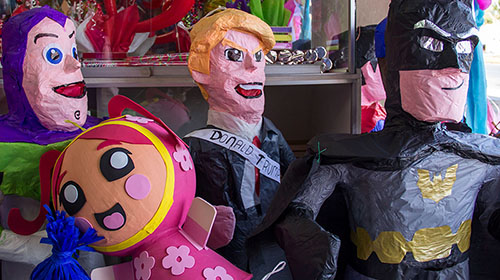 A U.S. journalist goes on a listening tour to explore the current, complicated feelings of Mexicans toward the United States. 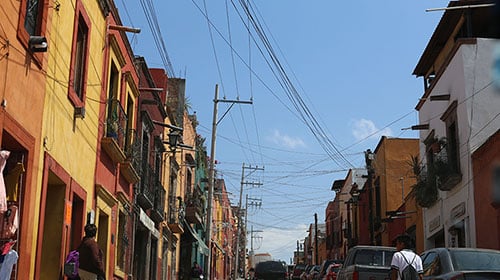 President Donald Trump’s words have changed the relationship between the United States and Mexico, igniting anger and a drive for independence within Mexico. 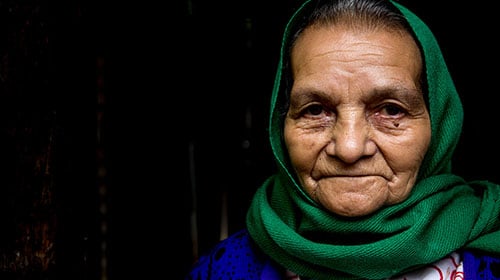 As generations of Mexican men have gone north for work, mothers left behind anchor their families and face the heartache of loss. 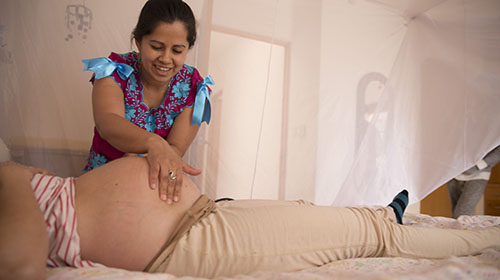 Mexican families who can afford it are turning to more traditional, natural methods of childbirth, including the use of midwives.

Thursday, Oct. 12, 2017. The Cronkite School has been covering immigration and border issues since 2006 with the generous support of the Howard G. Buffett Foundation.