An unidentified woman holds a sign during 2017 rallies for racial justice and Black women. Women of color, particularly Black women, often have been underdiagnosed and undertreated for eating disorders, but amid calls for equity, some providers are trying to change that. (Photo by Miki Jourdan/Flickr) 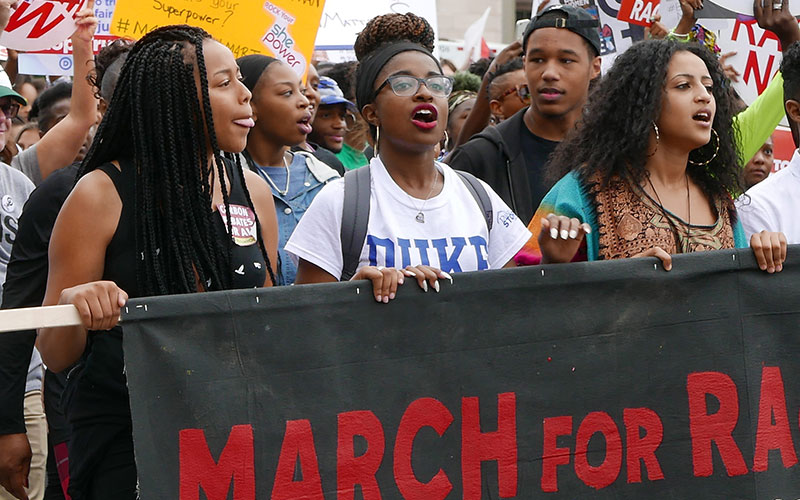 Women march for racial justice and equity on Sept. 30, 2017, in Washington, D.C. Changes in lifestyle during the COVD-19 pandemic have heightened concerns about eating disorders, but one demographic is drawing particular attention: Black women, who have long been overlooked in this specialized area of treatment. (Photo by Susan Melkisethian/Flickr)

PHOENIX – Changes in lifestyle associated with COVID-19 have heightened concerns among health professionals about anorexia, bulimia, binge-eating and other eating disorders.

But one demographic is drawing particular attention: Black women, who have long been overlooked in this specialized area of treatment.

“The real issues – the real medical and mental issues that we are trying to work through – are not looked at,” Gordon said, “because all they can see is the number on the scale.”

The recent deaths of George Floyd and other Black men and women at the hands of police have sparked outrage nationwide, but they’re also fueling new calls for equity in criminal justice, the news media, entertainment, technology, health care and other industries.

Gordon said white health care providers have reached out to her to acknowledge the lack of Black providers specializing in eating disorders and to question whether their approach to treatment has been appropriate. 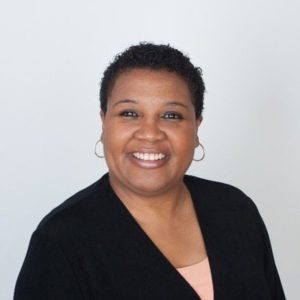 She trains teams to consider race and ethnicity during patient consultations, educates them about the Health at Every Size principles of inclusivity and body diversity, and helps evaluate marketing and diversity statements to ensure they’re inclusive.

It’s typical for women of larger sizes, in particular, to avoid seeking help, Gordon said, because the first thing they’re told is they need to lose weight, regardless of whether they came in for “a broken finger or a skin condition or COVID-19.”

Historically, women of color have been underdiagnosed and undertreated for eating disorders. In a 2006 study, clinicians were given the same description of a patient with disordered eating patterns, with race the only variable factor. Forty-four percent identified the white woman’s behavior as problematic, but only 17% identified the Black woman’s behavior as problematic. The clinicians also were less likely to recommend the Black woman seek professional help.

Although there are many misconceptions about eating disorders in general, one prevalent belief is that they primarily affect young, underweight white women, but research shows otherwise.

In a 2011 study published in the International Journal of Eating Disorders, researchers found similar rates of anorexia and binge-eating disorder across race and ethnicity, but a higher prevalence of bulimia in Black and Latino participants. Despite this, people of color were significantly less likely to receive help for eating disorders.

Sabrina Strings, a professor of sociology at University of California, Irvine, argues that this stigma around Black women and their bodies is embedded in racist roots of diet culture, which idealizes thinness and oppresses those who do not fit into society’s perception of health.

In her book, “Fearing the Black Body: The Racial Origins of Fat Phobia,” she writes: “The image of fat black women as ‘savage’ and `barbarous’ in art, philosophy, and science, and as ‘diseased’ in medicine has been used to both degrade black women and discipline white women.”

A 2019 Mayo Clinic article about disparities in the diagnosis and treatment of eating disorders concluded: “To explain this phenomenon, we seem to be experiencing the consequences of an illness narrative gone awry. A familiar paradigm has encouraged clinicians and the public to imagine that eating disorders are exclusive to frail, affluent girls of white race.”

When Williams tells clients that they fit the criteria, she says “their eyes (become) pretty illuminated.”

“They’ve mainly been told you need to eat less and exercise more, and you don’t have enough self-discipline,” she said. “It’s been a very finger-wagging kind of situation where they’ve never really looked at it from a more holistic standpoint.”

Jessica Wilson, a California-based dietitian and body activist, said this disparity of care is largely due to people of color being left out of research into eating disorders. This void has made it more challenging for providers to develop treatment plans for Black women.

“The models that we’re using now were developed decades ago,” she said. “And it wasn’t until recently that people were like, ‘Oh, maybe Black and brown folks also have eating disorders.'”

One of the curriculums Wilson finds problematic is the “appearance importance test” from the 1997 publication “The Body Image Workbook,” which asks patients to rate assumptions about their appearance, including:

“By controlling my appearance, I can control many of the social and emotional events of my life.”

“My appearance is responsible for much of what has happened to me in my life.”

“My physical appearance has a big influence on my life.”

Although this criteria is not used to medically diagnose an eating disorder, dietitians and therapists still use the test as a measure of body image.

White women may realize their appearance doesn’t affect how they’re perceived in the world and that they just need to change their “bad body talk,” Wilson said, but the experience of women of color is inherently shaped by how others view their bodies and skin color.

In her medical practice, Williams shares her own experiences with clients to validate some of their feelings about how looks and weight affect their position in society.

“They’re able to really identify in a personal way with what that stigmatization feels like – that layered stigmatization, as female, Black, of a larger body,” she said.

One of her former patients recently confided that food has been her only comfort amid the pandemic quarantine and some of the racist messages circulating on social media amid protests over police brutality.

Williams encouraged the woman to “figure out how to navigate and honor some of those challenges,” such as the inability to access therapy or implement daily structure, instead of falling into self-criticism and judgment around her food intake.

Wilson has taken to social media to demand inclusivity within the body liberation and social justice movements. Earlier this month, she and Alishia McCullough, a therapist and racial justice activist, started the #amplifymelanatedvoices challenge to elevate content creators – including dietitians, eating coaches and body liberation advocates – who are Black, Indigenous or other people of color.

Since that challenge, she said, a lot more people are reaching out for one-on-one coaching or group consultations. Wilson helps facilitate an eating support group on Instagram – @COVID19eatingsupport – specifically for people of color. It typically draws about 25 people, but had over 200 viewers during the challenge.

“I think both are demanding visibility,” she said. “And I think that both are naming the ways that white supremacy has impacted both the way that black bodies are policed, and also the ways in which black bodies are given eating disorder treatment – or not.”

Editor’s Note – If you or someone you know is struggling with an eating disorder, you can call the National Eating Disorders Association Helpline at 800-931-2237, text “NEDA” to 741741 or click to chat.