Many groups that advocate for immigrants provide economic and emotional support, as well as medical care, including vaccinations. Such groups now are helping immigrants of all legal statuses survive the COVID-19 pandemic. In this file photo, Andrea Ramírez, 2, of Chiapas, Mexico, watches as Daniela Gastelum of One Hundred Angels prepares a vaccine for immigrants waiting to cross the U.S. border in late January. (Photo by Delia Johnson/Cronkite News) 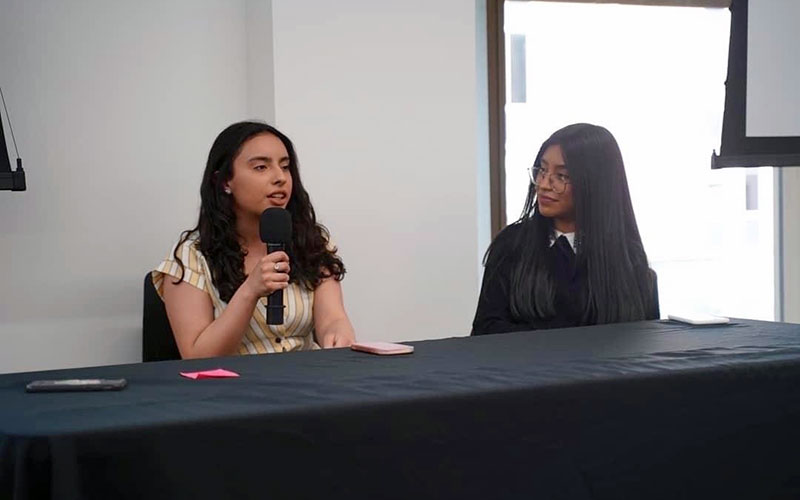 Ivette Sosa, left, and Priscila Romero were among the speakers who shared their experiences as members of mixed-status families during a panel discussion this year for Project STAND (Student Activism Now Documented). (Photo courtesy of Ivette Sosa)

PHOENIX – The $2.2 trillion coronavirus aid package that Congress passed in March has provided medical and financial relief to millions of Americans, including allocations for low-income, rural and uninsured populations.

Many immigrants, however, have been excluded from benefits under the CARES Act – leaving local advocacy groups to step in to provide economic, medical and emotional support.

José Patiño, education and policy director for Mesa-based Aliento, said his staff foresaw the havoc the pandemic could unleash on immigrant families after workers started getting laid off or furloughed, especially from the construction and hospitality industries.

“We asked ourselves: What is a goal we can set for ourselves that is ambitious enough but also realistic?” Patiño said.

The organization, which helps the children of those living in the country illegally as well as mixed-status families whose members include citizens and noncitizens, established a relief fund to provide $500 checks to cover rent, utilities and health care, if needed, for families ineligible for federal aid.

About 200 families across the U.S. and Puerto Rico have been helped so far, and another 200 are on a waiting list for assistance.

According to the Pew Research Center, only 37% of American adults think immigrants in the country without legal permission should receive financial aid related to the pandemic, although nearly two-thirds of those surveyed believe the government has a responsibility to provide medical services to those immigrants if they are stricken with coronavirus.

But those services are limited under the Coronavirus Aid, Relief, and Economic Security Act, known as the CARES Act.

Starting April 10, an initial $30 billion in federal funding was distributed to hospitals and providers enrolled in Medicare to help cover COVID-related treatment for the uninsured. Arizona received about $700 million for 6,017 providers.

However, Medicaid in most cases excludes the estimated 10.5 million immigrants living in the U.S. illegally, meaning they would not be covered when seeking testing or care from a physician.

“The main thing I would bear in mind is distinguishing relief for providers, which is really important, from coverage for people,” said Kelly Whitener, a health policy expert at Georgetown University. “To have a comprehensive response to a global pandemic, people need to have health coverage, and they need to be able to access services without fear.” 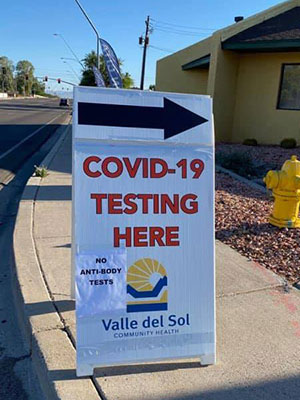 Under CARES, $1.3 billion was dispersed to community health centers that serve the uninsured and unauthorized immigrants. More than $25 million was given to 23 community clinics in Arizona, including Valle del Sol, which has health centers in Phoenix and Mesa.

The organization offers health services to the Latino community and underserved populations “with nowhere else to turn,” and has held several COVID-19 testing blitzes targeting those who are low-income or especially vulnerable to the virus, like farmworkers and construction workers. Tests are administered regardless of insurance or immigration status.

Because patients must provide Social Security numbers to receive results online, Valle del Sol workers have been calling individuals to deliver results, said Angela Florez, the group’s chief development officer. So far, none of those tested has been referred to a hospital.

As the co-chair for Aliento at Arizona State University, Ivette Sosa, 19, is passionate about advocating for immigrants’ access to resources. She and her two younger sisters were born in the U.S., but her parents are not citizens.

Sosa’s father is a construction worker, so she worries about his job security but also his health.
She said the combination of financial and emotional stress has been difficult for mixed-status families.

“It’s frustrating that these people are helping alleviate a lot of the struggles during these moments, but yet they’re not able to benefit from some of the resources or not included in the stimulus packages,” Sosa said.

The CARES Act excludes nonresidents, their U.S. citizen spouses and their dependent U.S. citizen children from receiving any COVID-19 related monetary compensation – including stimulus checks, which require a valid Social Security number. This extends to married couples who file jointly. 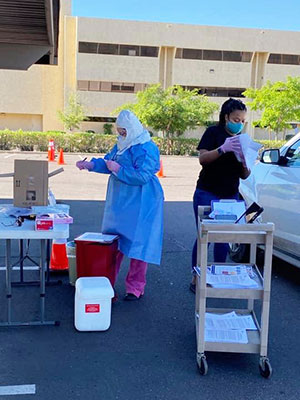 Health care workers with Valle del Sol tested more than 200 people for COVID-19 during a statewide blitz May 2. Testing by Valle del Sol was available to all, regardless of insurance coverage or immigration status. (Photo courtesy of Valle del Sol)

If both spouses don’t use a Social Security number to file their taxes, they and their dependents are ineligible to receive stimulus money in most cases. The nonpartisan Migration Policy Institute estimates that 5.5 million U.S. citizens or green card holders will be denied relief under the policy, which is being challenged in federal lawsuits.

The act also created a new temporary federal program, called Pandemic Unemployment Assistance, that provides an additional $600 per week in unemployment benefits for those who have lost jobs or are unable to work because of COVID-19. It also requires a Social Security number; legal permanent residents are eligible.

Patiño said Aliento has been educating independent contractors about what unemployment benefits they can apply for and working to assure those who may want to eventually adjust their immigration status that using public benefits for COVID testing or treatment won’t negatively affect their applications under the government’s “public charge” rule.

To receive money from Aliento’s fund, applicants must complete a survey about their household demographics, physical needs and mental health. The emphasis on well-being is intentional, Patiño said, because one of Aliento’s goals is to help immigrants emotionally heal from trauma.

“It’s all about mental health – how you process what’s going on if you lose your job … if schools are closing and you have to go to work but don’t have a person to take care of your children,” Patiño said. “So we needed to include these (questions) because we want to work toward making sure people have coping mechanisms.”

At a panel discussion earlier this year for Project STAND (Student Activism Now Documented), Ivette Sosa and Priscila Romero were among the speakers who shared their experiences as members of mixed-status families. (Photo courtesy of Ivette Sosa)

The organization also is using online programming to connect with young people and mixed-status families. On Thursdays, Patiño and Reyna Montoya, Aliento’s founder and CEO, host Aliento Live in both Spanish and English to provide updates about the relief fund and other resources.

Sosa’s family was among those who benefited from the cash assistance from Aliento. The help, she said, “gave my family hope and diminished that sense of loneliness.”

“Where the government was lacking, they really stepped up and took the lead in making sure they were acknowledging that, yes, mixed-status families need help,” Sosa said.

Patiño said the group will continue raising money to assist more families. The pandemic, he said, has only further added pain and hardship for migrant families that already were struggling – many of which include children who are U.S. citizens.

“There’s a lot of sadness,” Patiño said, “because it’s just a reminder that … at every turn it seems like you’re going to be excluded and that you don’t belong. And no matter how much they say you’re an American citizen, you’re not really a citizen, even though you aren’t undocumented, your parents are.”