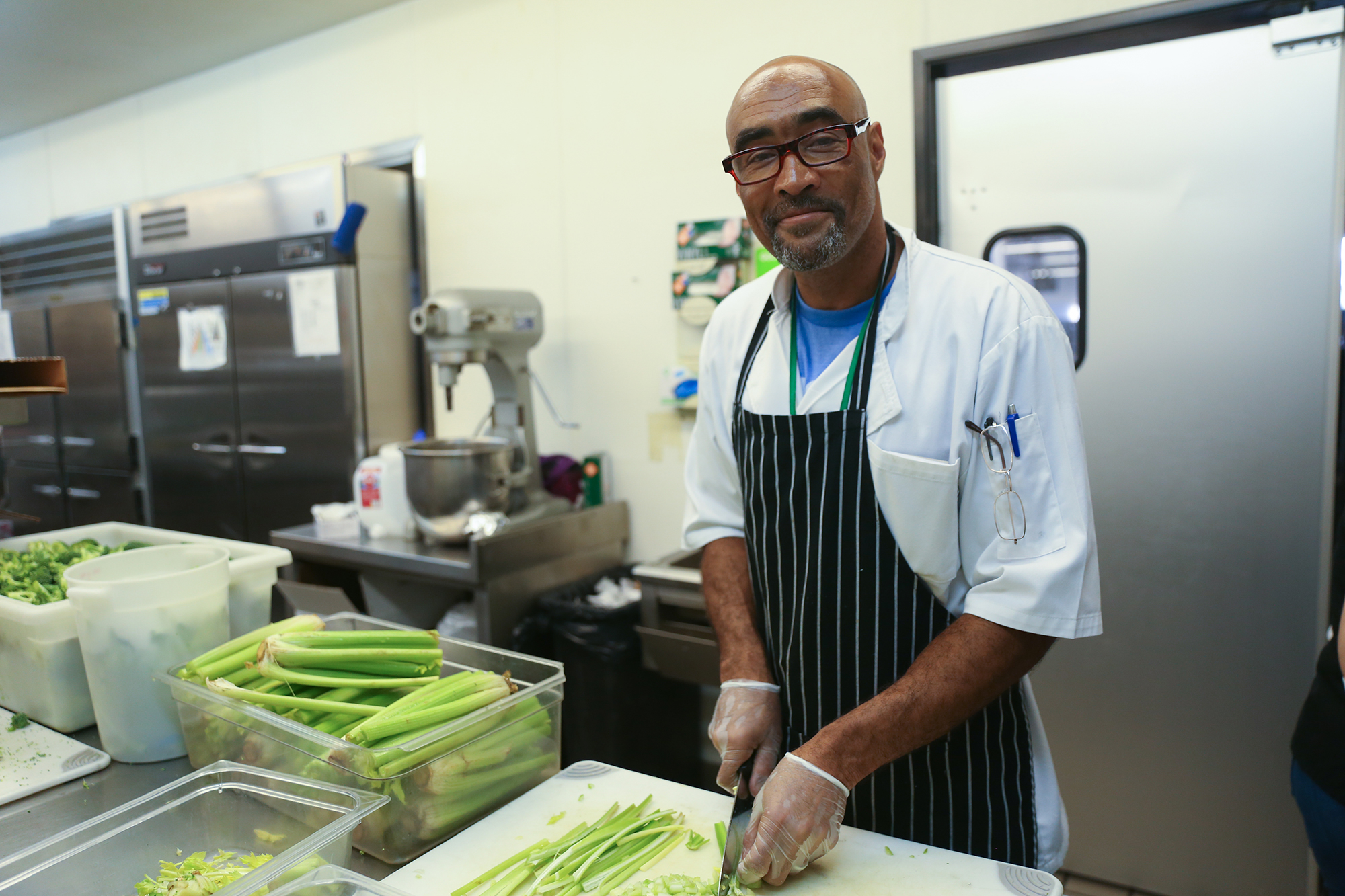 LOS ANGELES – On a small urban farm nestled amid buildings and housing developments in the industrial hub of Bell, California, a rooster sings while organic fruits, vegetables and herbs grow.

Known as Grow Good, the 1.5-acre plot does more than provide food – its harvest feeds the residents of a nearby homeless shelter. In 2011, the nonprofit teamed with the Salvation Army to transform a piece of land across from the Bell Shelter into an area of opportunity. Grow Good offers paid job training in the culinary arts and farming, while providing nutritious meals to the 500 people who call the shelter home.

Los Angeles County has seen a 12% surge in homelessness since 2018, bringing the number of unhoused people to nearly 59,000, according to data from Los Angeles Homeless Services Authority. The U.S. has more than half a million people experiencing homelessness, according to the 2019 Annual Homeless Assessment Report to Congress. Solutions have been difficult to come by all over America, and Grow Good’s model has the rare ability to address several core problems at once: shelter, employment, therapy and development for unhoused individuals.

Getting a job and regaining financial independence can seem like an impossible process for many homeless people. Grow Good has created an entire job training network reserved solely for underserved Los Angelenos living in the shelter, allowing them to develop the skills needed to get back on their feet once again. 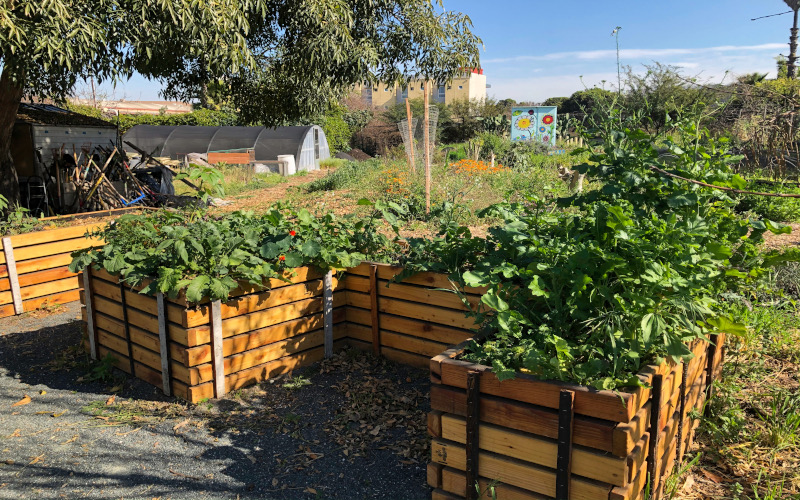 The garden started as an experiential, therapeutic escape where individuals from the Bell Shelter could interact with growing things and spend time outdoors. Over the years, it has grown and provides jobs, therapy and food for the individuals at the shelter. (Photo by Sarah Donahue/Cronkite News) 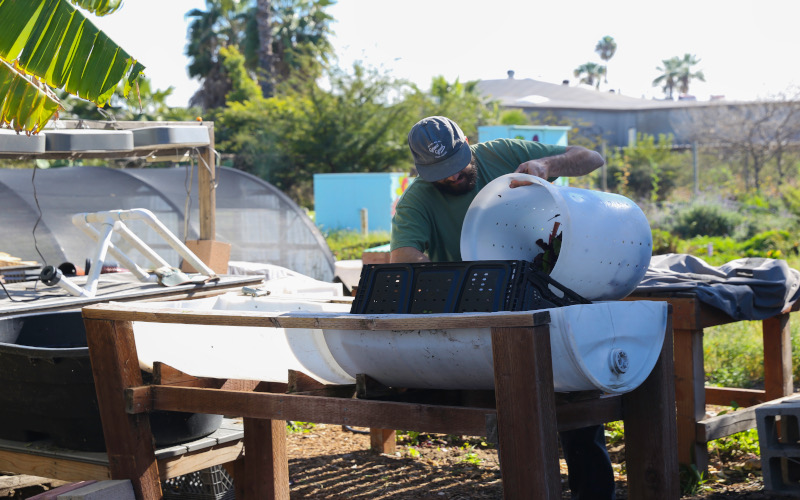 Eric Tomassini washes produce in the outdoor washing station in the Grow Good urban farm in Bell, California. The produce goes to the shelter's kitchen to be made into nutritious meals. (Photo by Sarah Donahue/Cronkite News)

Their 12-week culinary “seed to table” program launched in August 2017 and is instructed by chef April Ventura. Trainees are taught how to prepare the food harvested from the garden into meals for the shelter residents, while showing them how beneficial healthful food can be.

“We’ve met a lot of different people throughout the courses of the class,” Ventura said. “To see people moving out and getting jobs and the success of it – that’s super rewarding and worth it.”

In 2018, 21 shelter clients graduated from the culinary training program, according to Grow Good’s annual report, and eight of them landed significant culinary jobs in Los Angeles. The employment training has proven to be a valuable stepping stone to outside jobs. One of Ventura’s most fulfilling experiences was watching a woman who was just released from jail come to the shelter, join the culinary program and reestablish her independence.

“Where she works now, she is a top cook, one of the people they rely on most,” Ventura said proudly.

Local restaurants and farmers markets also support Grow Good’s social enterprise by purchasing organic microgreens, herbs and produce, and the money earned is reinvested into the organization, according to Grow Good.

Grow Good also offers emotional therapy in its California native garden. The shelter’s residents, many of them military veterans with post-traumatic stress disorder, can find peace through yoga, meditation and spending time outside in the sunshine to foster healing and a clear mind, administrators said.

William Ammons said he joined the culinary program after seeing a flyer and application on a wall at Bell Shelter. The gentlemanly 54-year-old said his time in the program has been an “enlightening period.”

High cholesterol was an issue for Ammons in the past, and although he hasn’t been tested recently, he says he feels healthier since joining the culinary program and eating fresh food.

“You know your own body,” he said.

For many homeless people, it can be hard to find healthy, nutritious food while surviving on the street, said Devin Bowes, an Arizona State University graduate research assistant and human health and nutrition expert. 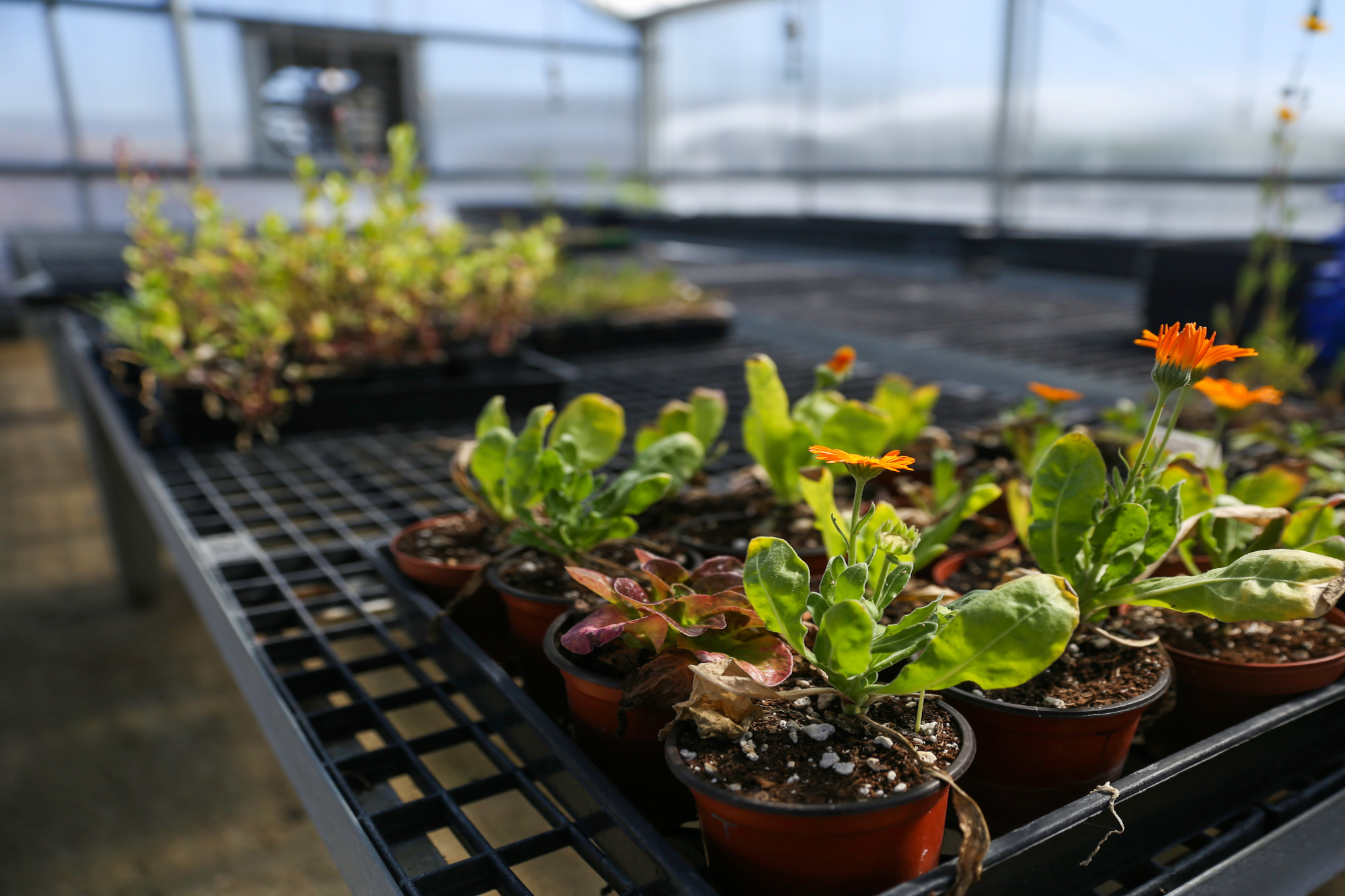 Food deserts – pockets in urban areas without close proximity to healthy, affordable food – can be to blame, Bowes said. About 54.4 million Americans, or 17.7% of the total population, live in food deserts, according to data from the U.S. Department of Agriculture.

Using this measure, an estimated 54.4 million people, or 17.7 percent of the U.S. population, live in tracts that are low-income and low access and are more than ½ mile or 10 miles from the nearest supermarket.

The nearest options are usually processed snacks or fast-food for those who live in food swamps – urban areas where convenience stores and fast-food chains are abundant but access to nutritious food is not, she said.

The problem is particularly persistent for residents of South Los Angeles, where a 2018 study from Loyola Marymount University found that there are 12.5 times more fast food restaurants than grocery stores.

Bowes said eating processed food that’s high in sodium rather than getting vital nutrients, vitamins and minerals from fruits and vegetables has poor outcomes.

“Over time, that can really have an effect on your health if you’re missing out on certain vitamins that help with development or help with cognitive function or cardiovascular health,” she said. “There’s a whole set of issues that can arise from not getting proper nutrients, whether you’re homeless or not.”

Ammons said he had a habit of eating healthy before his time at the shelter, but “not quite this healthy.”

“I like to stay fit; however, I’m sure I’ve been putting all the wrong things in,” he said with a chuckle, adding that he has learned a great deal in the culinary program.

“You can definitely taste the freshness in it, and to me, that’s very rewarding,” Ammons said while chopping celery.

At his age, he said, he’s tired of doing manual labor and likes the relaxation of cooking and its great-tasting reward. A year from now, Ammons said he’d like to be working in a fine-dining establishment.

The Bell Shelter cares for up to 500 homeless men and women at a time. It’s one of the largest homeless shelters in the West, according to Grow Good’s website, where 6,000 meals are served a week. The Grow Good farm provided more than $25,000 worth of organic produce to the shelter’s kitchen, according to its 2018 annual report. 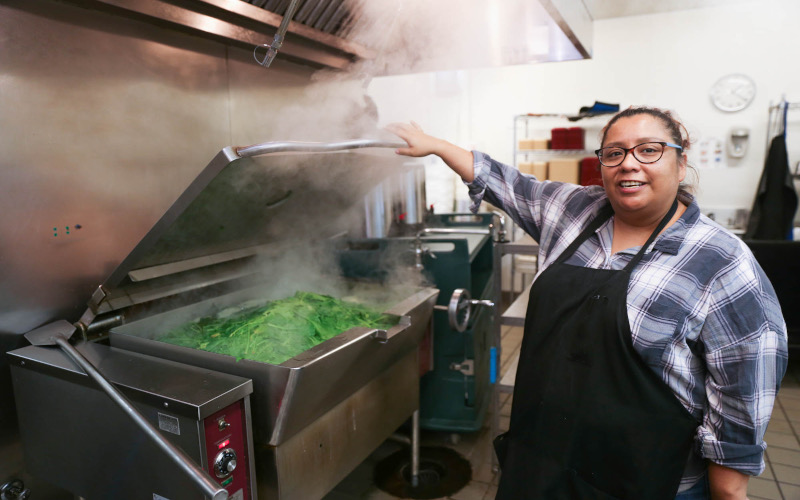 Chef April Ventura steams spinach in the Bell Shelter's kitchen, where meals are made for shelter clients to enjoy. (Photo by Sarah Donahue/Cronkite News) 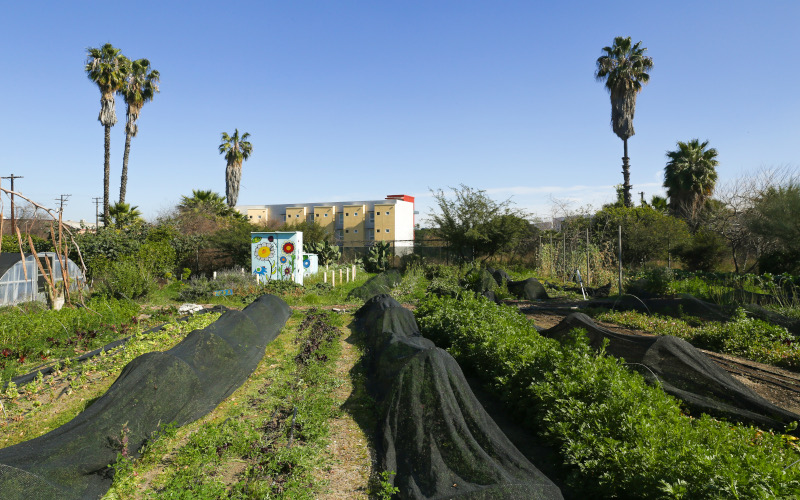 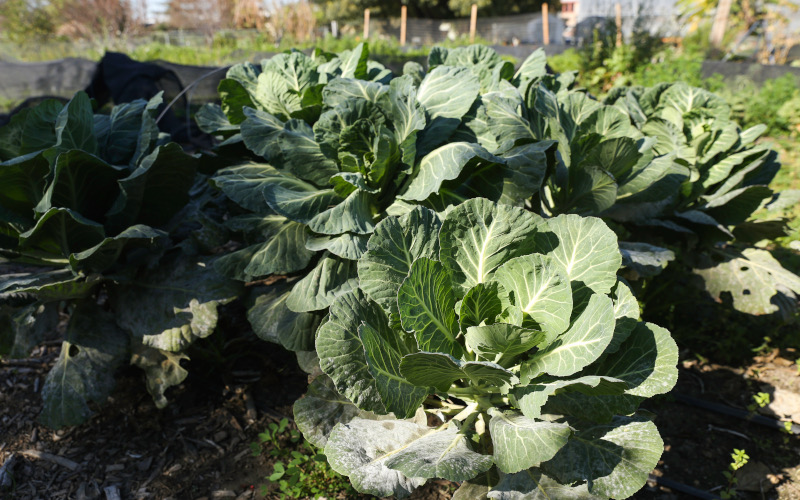 This holistic approach to homelessness, which addresses shelter, food and employment in one setting, offers a rare success story in the face of a growing problem of food insecurity and lack of housing. Although Grow Good faces its own financial challenges, mostly depending on grants, donations, volunteers and its social enterprise, the potential of their model is obvious.

For decades, low-income communities have struggled to cope with food deserts and food swamps. Bringing urban farms to these areas offers an innovative way for individuals to access nutritious meals.

Urban farms are becoming more popular as means to address food insecurity in the temperate climates of the Southwest. St. Vincent de Paul’s chemical-free urban farm in Phoenix grows hundreds of pounds of fresh produce each week, which goes into food boxes for the city’s underserved families. Phoenix has 43 food deserts hindering people from accessing healthy food, the city reports.

Urban agriculture is growing in popularity worldwide. About 800 million people around the globe practice urban farming, according to the Food and Agricultural Organization of the United Nations. 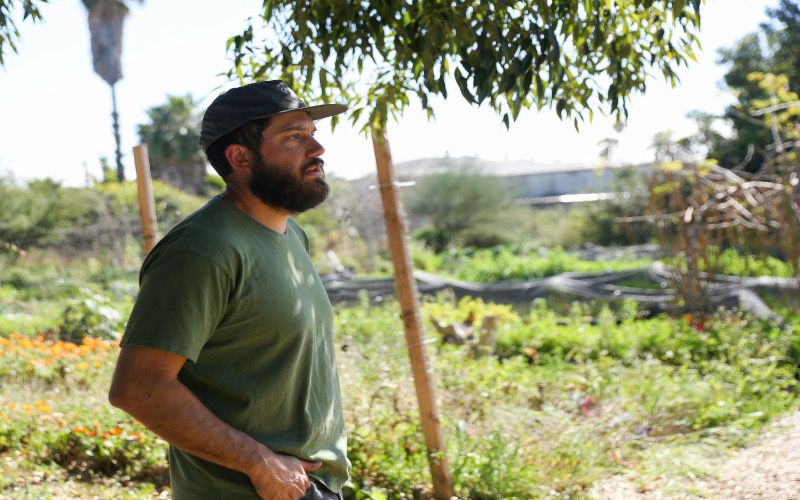 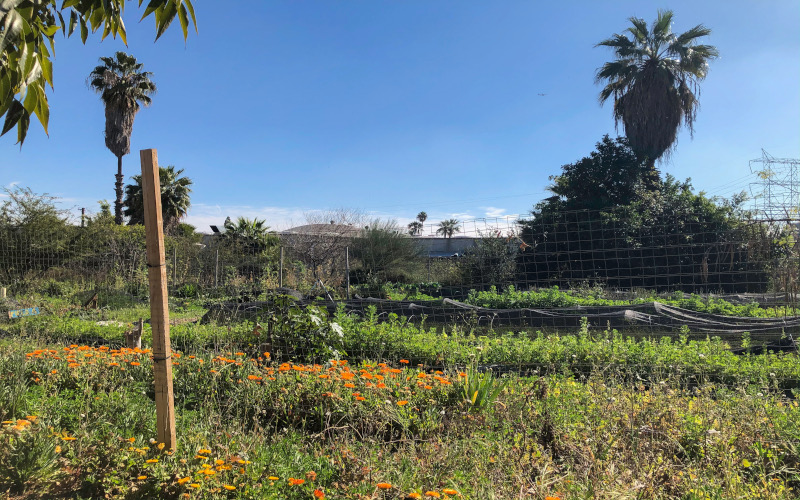 Grow Good's urban farm has plans to implement a sitting area so any of Bell Shelter's 500 or so residents can enjoy the therapeutic benefits of spending time outdoors. (Photo by Sarah Donahue/Cronkite News)

“The best way to teach how to be employed is to employ,” is Grow Good’s main premise, as the shelter clients learn while getting paid for their work. Farmworkers receive hourly pay; culinary program participants earn weekly stipends.

Eric Tomassini, Grow Good’s farm and culinary program manager, said working closely with Salvation Army’s case managers helps him understand the shelter clients’ abilities and challenges. The program has expectations for the trainees, but if struggles arise they are handled in an understanding way.

In many ways, Tomassini said, he’s like a boss for the shelter clients. He helps them develop hard skills but also helps them with stress management, leading each lesson with mindful meditation as well as weekly journals where all program members collaborate to create team goals as well as personal goals.

“Show up and do your best” is the mantra, Tomassini said, although “sometimes your best is different every day” because of the many struggles homeless people face while trying to get back on their feet.

“They’re the best at supporting each other,” Tomassini said. “We can support them, make sure that they’re ready for interviews and have their resumes and everything, but it’s really the friendships and community as a group because they’re all going through this program together.”