TUCSON – Bandages, blood pressure machines and other medical supplies clutter a folding table as student volunteers from the University of Arizona provide patients with much needed care they might not otherwise get.

Immigrants, some in the country legally and others not, came to a local resource center on this day to have their blood pressure, glucose and body mass index checked – free of charge – as part of a preventative health care program provided by the Mexican Consulate.

“They come in sort of grateful sometimes, because we have this here and they haven’t checked their glucose or blood pressure in years, or they haven’t been to the doctor in years,” said Diana Grijalva, 23, a UArizona senior who helped administer exams.

“To them, it’s a relief when they see the numbers and know they are OK.”

Ventanillas de Salud, or “Health Windows,” is an initiative begun by the Mexican government to provide preventative health care and health education for Mexican citizens living in the U.S. The effort began in 2003 in San Diego.

Today, 51 programs operate from Mexican Consulate offices across the U.S., each serving the unique needs of their area in collaboration with local health care organizations.

Enrique Gómez Montiel, deputy consul in Tucson, said the program is successful because it reaches patients in two ways. Some screenings are provided at the consulate itself, and, using local partners, the initiative also helps immigrants “where the community actually gathers – in community centers, in churches, in libraries, in other public spaces.”

He noted the program is not restricted to Mexican citizens.

“Anyone who comes here to seek assistance will be given (a) referral” for care, he said.

More than 44 million people living in the U.S. were born elsewhere, and Mexico is the top country of origin, with 11.2 million immigrants, according to the Census Bureau. That includes an estimated 4.9 million Mexican citizens living in the country illegally, the Pew Research Center reports.

Federal statistics show that Hispanics are most likely to not have health insurance, and 19.3% of Mexicans living in the U.S. are without health insurance coverage. Those in the country illegally are not eligible for government-funded insurance under the Affordable Care Act. 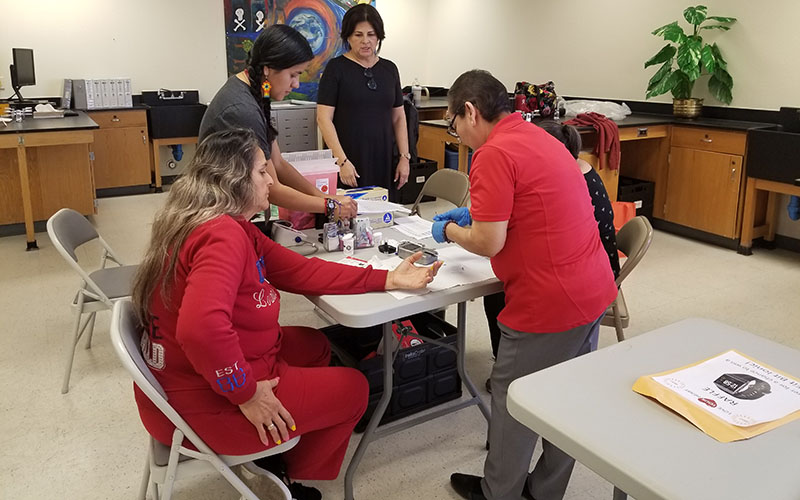 Francisca López, 55, came to the U.S. in 2006 from the Mexican state of Sonora after her son, Yonathan, was struck by a train in Arizona. The 19-year-old died 21 days later, but she stayed in the country and does not have legal status, she said.

López, whose two children are in the U.S. under the Deferred Action for Childhood Arrivals program, relies on free services provided by the Ventanilla program.

“There are people who do not know what is going on with their body until there is something serious and it’s an emergency,” she said at the February checkup.

Lourdes Escalante, 48, only recently discovered the Tucson Ventanilla, but she’s grateful to know there are options for medical help.

Also from Sonora, she has lived in Arizona since 1986, and her experience navigating the U.S. health care system has been difficult.

Her job at an assisted living home doesn’t provide her with insurance, she said, and she’s been cycling between different services and providers to get care.

“Many times there is not enough information (about) where the clinicians and services are for the people who need it,” said Escalante, who was accompanied by her mother.

“It’s to prevent a lot of the chronic diseases, especially in our community,” Verdugo said. “Just this year, I’ve already had five people walk into my office with a cancer diagnosis, and they’re later stages of cancer.”

Juntos por la Salud, a program operated by UArizona’s Mel and Enid Zuckerman College of Public Health, collaborates closely with Ventanilla de Salud. Using a mobile unit, the program provides prevention services in communities with large numbers of uninsured or underinsured residents. From April 2017 to January 2020, it has served more than 3,500 patients.

There are five Ventanillas in Arizona, according to the Arizona Department of Health Services – in Phoenix, Douglas, Nogales, Yuma and Tucson.