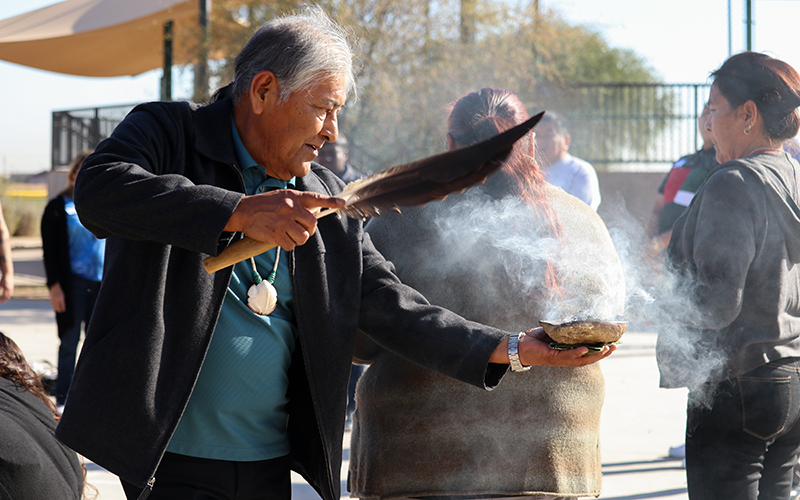 Barnaby Lewis participates in a smudging, in which smoke from a special plant is waved around individuals to cleanse the spirit. (Photo by Megan Marples/Cronkite News) 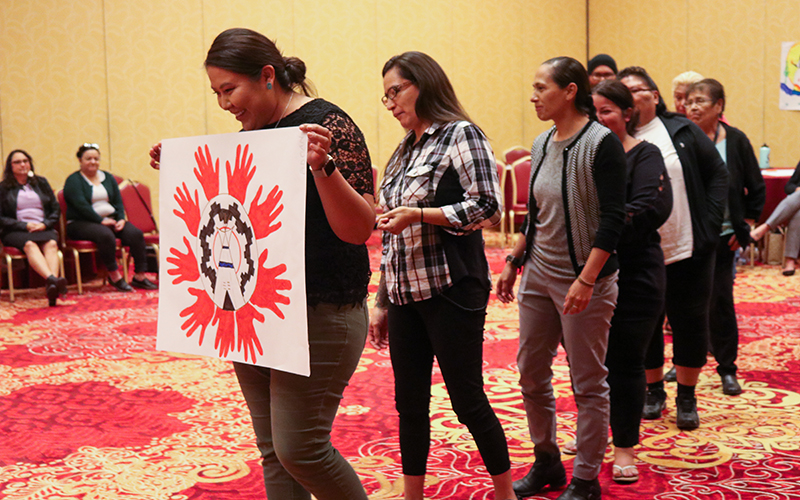 In the afternoon, attendees split into groups and decorated poster board to represent something of significance to them. The red hands represent the missing and murdered indigenous women. (Photo by Megan Marples/Cronkite News) 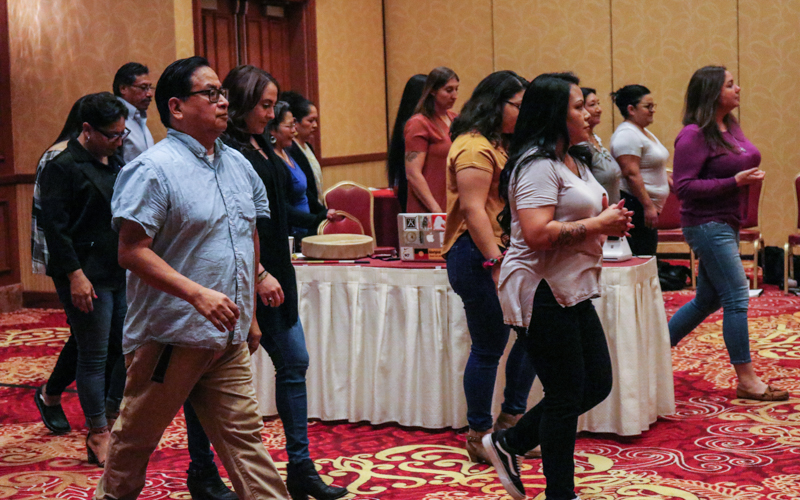 Attendees participate in a team-building exercise. A leader reads off a statement, and if it applies to someone, that person walks to the other side of the conference room. (Photo by Megan Marples/Cronkite News)

LAS VEGAS – An opening prayer welcomes 75 Native American men and women from across the nation, gathered at a hotel to learn how to use tradition to heal from trauma – and to help others heal, too.

“My grandmother was killed by her husband,” said Lisa Rose Sanderson, a youth prevention specialist for the Yurok Tribe in Medford, Oregon. “My mother, my grandmother, my sisters – we’ve all experienced domestic violence, as well as myself.”

It’s a crime all too common in Indian Country.

Domestic violence affects 4 out of 5 Native American women, according to the Indian Law Resource Center. That’s more than triple the national average. Indigenous women also are more than 10 times as likely to be murdered, according to the Justice Department.

But some have found healing through what’s known as Gathering of Native Americans programs. These culture-based education sessions, created in 1990, seek to foster healing through embracing community and tradition. They target such issues as suicide, addiction and domestic violence.

Although the workshop format of each is the same, the tribal traditions employed – and emphasis of each lesson – change depending on who facilitates and attends. For example, youth gatherings may be more focused on suicide and academic pressure, whereas sessions with women may focus more on domestic violence.

Sanderson advocates for survivors of domestic violence and hopes to take home lessons to help women in her own community.

“We need each other to heal,” she said. “When another woman gets hurt in a community, that hurts another woman and another family.”

Theda NewBreast, a Blackfeet woman who co-created the curriculum, led the recent workshop at a Las Vegas hotel.

“Once you see a community start to use those to remedy all of those, you start to see outcomes of children being happy, families being happy, and the tribe being sovereign,” said NewBreast, who travels the United States leading Gathering of Native Americans workshops and training other facilitators.

“Domestic violence is a symptom,” she said. “It’s a symptom of a core issue from longtime repeated trauma done to us – like stealing our land, stealing our children, disenfranchising our men and then stereotyping us.”

Many recent efforts have focused on the lingering issue of Native American women and girls who’ve gone missing or been murdered, and Arizona and other states are working to collect better data around the problem – one that experts say is largely linked to sex trafficking as well as domestic violence.

A newly formed study committee in Arizona is working with colleges to collect the information from various sources and create an exhaustive, accurate database.

Aside from finding and learning about the raw data, many Native Americans feel it is necessary to share their own stories and lessons. After all, they note, these statistics represent people and their stories. 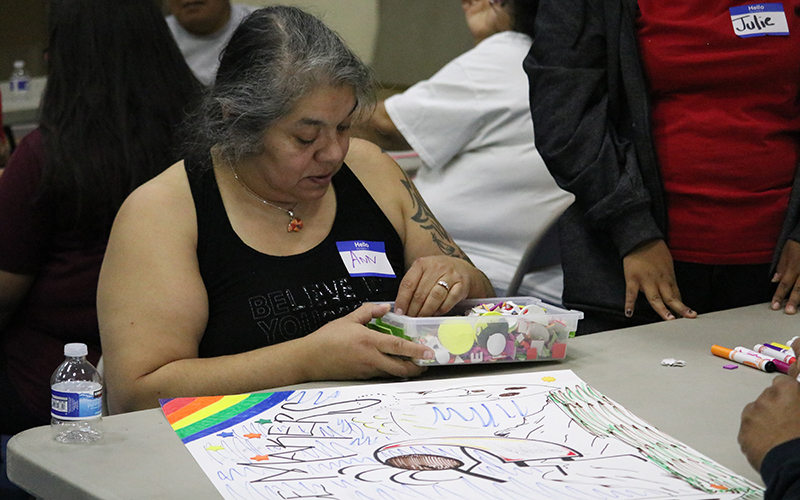 Ann Mason helps make a shield to represent her group. After the shield is completed, it is placed at the altar. (Photo by Megan Marples/Cronkite News)

For many, the Gatherings program represents a full-circle moment, both literally and figuratively. NewBreast asks that all attendees sit in a circle, representing the cyclical way of life, honoring tradition and including everyone in the room.

Carlton Timms is a survivor and former domestic abuser. After attending Gatherings to heal from domestic violence, he now tells his story as a facilitator.

“If you’re not in any counseling or if you don’t heal from it or are not taught otherwise,” he said, “then you become the perpetrator.” 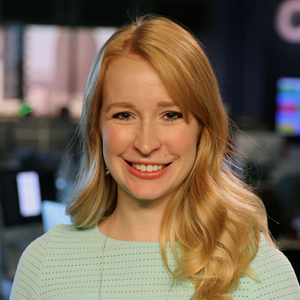