Some of the Chincoteague ponies graze on the marshes of Assateague Island, a protected national park. Locals have kept the herd in check through annual roundups and auctions of foals. (Photo by Harrison Mantas/Cronkite News) 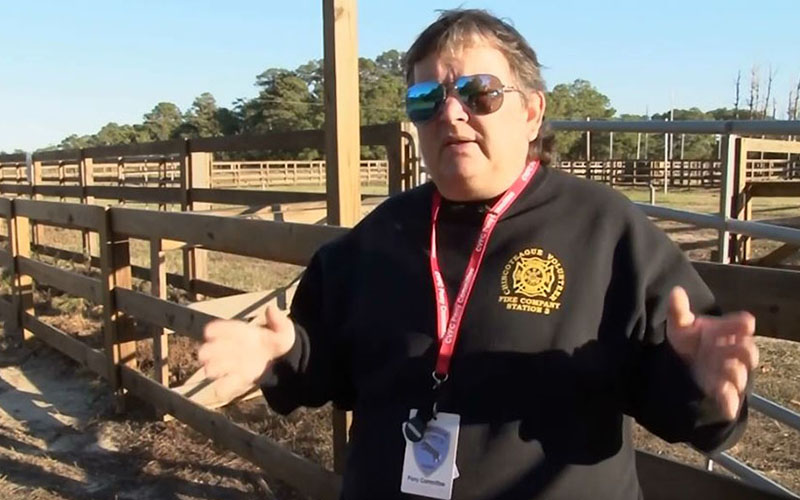 Denise Bowden is a “saltwater cowgirl,” part of the team that cares for the wild ponies that put Chincoteague on the map. She says it’s “a lot of work, and yet it’s a lot of fun at the same time.” (Photo by Bryan Pietsch/Cronkite News)

CHINCOTEAGUE, Va. – The Bureau of Land Management has a problem.

Tens of thousands of wild horses and burros are ranging over federal land in the West, three times what the land can support, and the agency says its efforts to manage the herd are increasingly coming up short.

Evelyn Shotwell has a solution.

“The thing you got to do is get people to love them,” said Shotwell, the executive director of the Chincoteague Chamber of Commerce.

Thousands come to this narrow, windswept island on Virginia’s Atlantic coast every summer to see Chincoteague’s ponies, wild horses that have been here since colonial times and have been a boon to the town for the past century.

Residents here have made their wild pony population both an engine and a symbol of their town.

People like Denise Bowden, part of a special team within the Chincoteague Volunteer Fire Co. that cares for the roughly 150 ponies that put this Virginia barrier island on the map.

“It’s a lot of work, and yet it’s a lot of fun at the same time,” said Bowden, a member of the “saltwater cowboys” – or in her case, cowgirl.

Every July, the saltwater cowboys and girls round up the ponies on adjoining Assateague Island and drive them on a short swim across the channel to the town of Chincoteague, where some of the ponies are auctioned off.

The event, which started in 1925 to raise funds for the fire company, gained national fame from Marguerite Henry’s 1947 book, “Misty of Chincoteague.” Bowden said the auction now brings in the majority of the fire department’s annual budget, and is worth roughly $1.5 million in business to the town.

Both Shotwell and Bowden say pony week is a special time for locals and visitors alike.

“When the ponies get there to the water’s edge, and they get into the water and 40,000 people erupt into cheers, I got cold chills right now just hearing that … how happy they are to be here,” Bowden said.

But the annual swim and auction serves another purpose, too: It manages the size of the herd and protects the environment on Assateague.

The fire department owns the ponies and has a federal permit to graze them on Assateague, but the permit requires that they keep the herd no larger than 150 ponies. Young foals each year are auctioned off to limit the herd’s size.

Across the state line in Maryland, the National Park Service manages a smaller herd of 75 horses, not by selling them off but by shooting the mares with a dart that delivers a contraceptive called PZP. Gretchen Knapp, a park service supervisor on Assateague Island National Seashore, says preventing regular pregnancies in the mares actually improves their health and longevity.

“Before, a horse living into … their teens was old. Into their late 20s is now kind of normal for some of these horses,” Knapp said.

BLM, which is charged with managing the wild herds, has used PZP to manage wild horse and burro herds in the West, with mixed results.

Paul McGuire, a BLM spokesman, said in an email that the vast and rugged landscapes in the West can make darting – or the related process of herding and directly injecting animals – difficult and costly.

“After repeated gather attempts, horses and burros become quite savvy at avoiding capture, so you begin to experience diminishing returns,” McGuire said.

Critics disagree, arguing that BLM could easily control the herd size with darted applications of PZP. Simone Netherlands, executive director of the Salt River Wild Horse Management Group in Scottsdale, compares PZP to turning off the faucet on an overflowing sink.

“Instead of fixing the sink, the Forest Service and BLM want to keep mopping the floor,” Netherlands said. 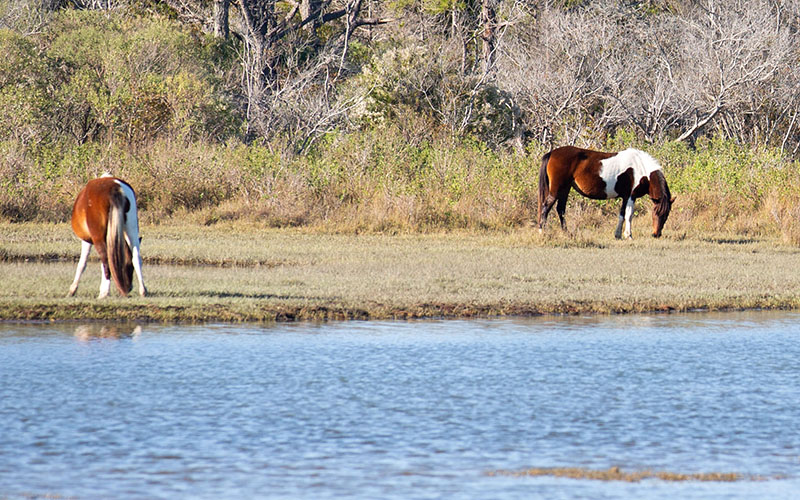 Thousands descend on the town of Chincoteague, Va., every summer for the annual roundup and auction of some of the island’s famous wild ponies. (Photo by Harrison Mantas/Cronkite News)

She finds it hard to believe that federal agencies can’t find a way to manage the herds.

But Knapp said there’s an advantage to herd management on Assateague that officials in the West don’t have: Assateague itself.

“It’s easier to do when they’re on an island,” Knapp said of the ponies, “because it’s a contained area … so darting becomes much more practical.”

It’s also easier to keep tabs on the animals.

Island resident Darcy Cole photographs the ponies on near-daily walks on Assateague and knows most of them by name. She said she often serves as an early warning system for the fire company, whose year-round care allows the herd to thrive.

“365 days a year they are on call, and when I report an issue with a pony, it’s like calling 911 for a person,” Cole said. “Like Ajax … I reported him, and they came right out and got him. I never thought he would return to the wild, and he’s back in the wild now.”

Bowden’s biggest fear for the herd is complacency among locals.

“I don’t think people understand that this can go away as quickly as you flip on a switch, because without the volunteers, it can’t, it just can’t be done,” Bowden said. For her, the key is to get more young people involved taking charge of the care of the ponies.

But Cole, whose photography Facebook page has just fewer than 10,000 followers, says people get “pony fever” when they see the animals up close.

“We are so blessed that this refuge was preserved for us to enjoy like this … this is heaven,” she said.