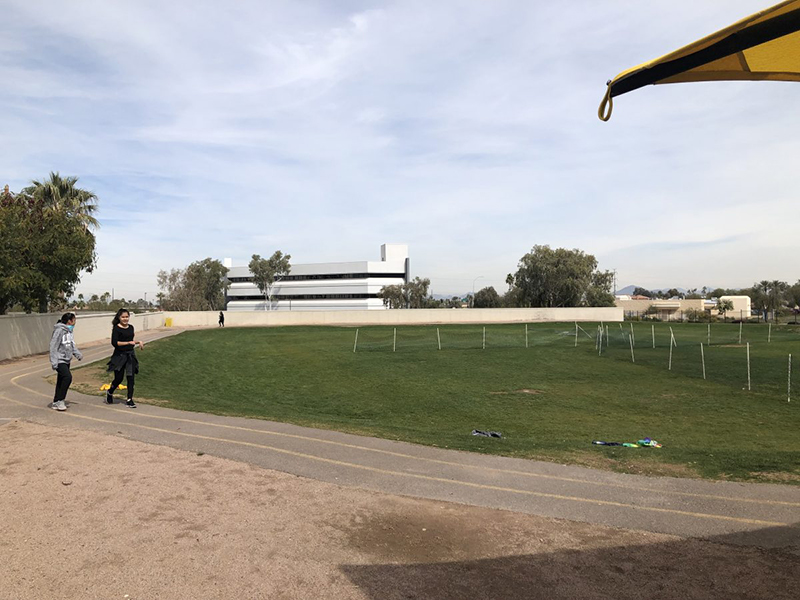 Two students at Champion South Mountain get in a few laps before school starts. (Photo by Brendon Kleen/GlobalSport Matters)

PHOENIX – Young athletes typically are encouraged to push themselves to the highest level of competition at every step. Champion schools in Arizona have developed an “it takes a village” approach that can open doors for students who do not come from privileged backgrounds.

When guests enter the lobby of Champion South Mountain, they notice the dozens of trophies near the office, as well as the students of all ages circling a rubber track for their morning workout.

Champion is proud of its model, which pairs rigorous K-8 education with a comprehensive sports-centric approach to the school’s curriculum and community.

Instead of traditional physical education, students participate in hourlong workout sessions Monday through Thursday. They are required to participate in after-school sports – one per season for young students and two per season starting in fourth grade. The final component is a requirement that all teachers serve as coaches.

“You want them to be dripping with sweat but with a smile on their face,” said Philip Cahal, the school’s athletic director.

A tour through the South Mountain campus shows as much. The hardtop basketball court between the front office and classroom building is lined with hoops on each side and filled with students. The noise of the students being coached over at the track near the front of the school swells with the older students on the court working on basketball and volleyball skills. There’s a buzzing energy to start the day.

Champion owner Carolyn Sawyer developed the idea, in part, with Cahal’s help, and the model took off when they found a campus in South Phoenix.

Sawyer grew up before the passage of Title IX, so the only options available to her as a girl were cheerleading and pep band. She said she believes performance in sport is connected with achievement in the classroom, and she proudly boasts of Champion South Mountain’s A rating from the Arizona Charter School Association.

‘It brings our whole campus together’

In lieu of a traditional physical education classes, students train 45 to 70 minutes per day, performing speed, agility, weight resistance and explosive-movement workouts that aren’t familiar to most grade schoolers.

“Some of the stuff that they’re doing, I definitely didn’t do until I was in college,” Cahal said.

That includes intense competition at a young age.

Varsity, which is what Champion calls its top-level competitive teams, gives students opportunities in a variety of sports. During the fall semester, Champion offers flag football and girls’ volleyball. Winter brings boys’ basketball, followed by girls’ basketball, coed soccer and track and field in the spring.

Only middle-school students compete on Varsity. At that time, physical training ramps up, said Cahal, who helps manage and oversee athletics for all three Champion schools in metro Phoenix.

Cahal started at Champion when he was 20 and playing college baseball at ASU. His vision for the school’s sports-centric program developed out of his experience at EXOS Phoenix, a 31,000-square-foot training facility that he and his Arizona State teammates used.

“We had trained as professionals and around professional athletes, so we took what we had learned as athletes and we started applying it to the kids,” Cahal said.

His colleagues dreamed of what it would be like at a young age to have access to professional skill training and exercise. They wanted to give Champion’s students that opportunity.

The approach changes more than just how an average student’s day looks. Ross’ survey research shows they feel relatively more gifted, successful and personally connected with their schoolmates as a result of the school’s sports-centric approach.

Student competitions on Saturday mornings illustrate a connection among students, parents and faculty members that doesn’t exist at many schools, particularly those with sports at their core.

“It’s a big community function,” said Ross, who previously taught physical education at a traditional public school. “They seem like they have a special bond there at the school through that focus on sports.”

“It brings our whole campus together,” Cahal added. “When I’m talking to younger students, they really have a sense of pride about what they’re growing into and they also learn to be on a team.

“It sheds a new light on the community down at South Mountain as a whole. … When you come in on a Saturday morning, and you’ve just got a bunch of kids smiling, ready to go play their sports and their parents are there to support them, it’s a beautiful thing.”

The Saturday games are not mandatory or a part of students’ classroom grades. Rather, the voluntary gatherings have become a symbol of the excitement around sports at Champion South Mountain.

Students at Champion South Mountain can’t afford Pop Warner football or club soccer. The trickle-down of Champion’s supportive ecosystem is important for a section of Phoenix where 45.9% of children younger than 6 live below the federal poverty line.

The three other Champion campuses are in similarly downtrodden socioeconomic areas, and administrators hope Champion’s model continues to cultivate a community built around pride and work ethic in sports.

“When teachers are involved with kids after school, it’s in a different environment, a more personal environment, sometimes a more fun environment where they can connect at a different level and really form those bonds,” Ross said.

“A lot of students will respond very differently in that setting as compared to sitting in a classroom. The engagement and relationships that can be formed after school might be really critical for the social and emotional health for students, let alone the physical benefits of being involved with sport.”

As the owner, Sawyer helps middle-school students choose high schools and bases the decision on college applications to encourage and educate students early. Students are encouraged to visit public high schools where they can continue to learn and compete in sports.

At Champion schools, students’ sports fees, which are $45 per child, cover 25% of the costs. Sawyer said she works hard to find scholarships and grants to make the program more cost-effective for the schools and affordable for students.

In order for the sports-centric model to take off around the globe, Sawyer said it needs to become financially viable at Champion.

“That component could really translate into the public school setting as well,” Ross said, because of the way it increases student motivation in and out of the classroom and empowers young people.

However, Ross’ research showed girls at Champion displayed a lower sense of motivation compared with boys. Ross said he views that result not as an indictment of Champion’s model but rather a “hurdle across the world.”

Many of the female students Ross interviewed said they wanted more women coaches. Sawyer and Cahal noted how much of a struggle it can be to find experienced teachers who can also be good coaches. That, in turn, makes it difficult to offer the same variety of sports for female students — in the winter, girls can try out for boys’ basketball if they want, but there are no opportunities for an all-girls team.

The problem is cyclical.

Champion is competing with big business as well as societal inequity. According to a 2017 Time magazine article, the nonprofit United States Speciality Sports Association generated $13.7 million in revenue in 2015. Privatized youth sport has grown into a global, interconnected money-making monolith that leaves some students behind. Colleges and pro leagues target youngsters who develop in private sports clubs, making it more difficult for Champion students to get scholarships or professional opportunities.

Those circumstances favor wealthy families and disenfranchise poorer ones.

“Compared to their peers, whose families make more than $100,000, children ages 6 through 12 whose family income is under $25,000 are nearly three times as likely to be ‘inactive’ – meaning they played no sport during the year – and half as likely to play on a team sport even for one day,” Linda Flanagan of The Atlantic reported in 2017.

Yet there are many success stories that continue to inspire the staff at Champion.

Anthony Marquez attended Champion in its early days and moved on to Camelback High School in central Phoenix after graduating. He was the varsity quarterback at Camelback as a freshman. He received scholarship offers from Stanford but chose Arizona State to stay closer to family and the community he loved at Champion. He continues to volunteer at the school.

Marquez and students like him are what researchers have termed “good youth.” A 2005 report from the Physical Education and Sports Pedagogy journal showed that physical activity was positively correlated with academic performance and facilitated proper growth and development in children.

Ross believes stories such as Marquez’s, in addition to the overwhelming positive sentiment found in her survey research, show the model can work and grown in traditional public schools. She sees Champion as potentially the start to something grander across the country.

Detecting and avoiding physical and emotional burnout has become a focus for educators and coaches across the country. The 2005 Physical Education and Sports Pedagogy report’s survey data showed 50% of participants believed programs were “too serious, focused only on winning, and lacked enjoyment.”

Ross said she believes Champion’s healthy meal program, as well as its focus on technique and fitness over competition, could help.

“When athletes are exposed or sampling different sports, especially at a young age, they’re less likely to burn out,” she said.

Champion students are more focused on building their own system than the future, but Cahal said he believes growth is possible:

“Being healthy, being a physically fit person, loving to move, to be a part of a classroom and a community, striving to get better and be a healthy, strong person, those are obvious benefits that you can take from going to Champion.”