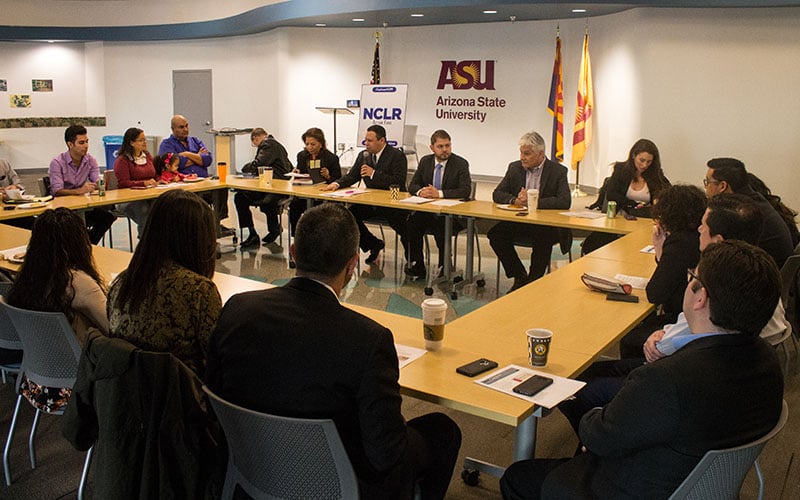 PHOENIX – Congressman Ruben Gallego, along with environmental advocates in the Latino community, touted the importance of the EPA’s Clean Power Plan at a round table conference Thursday organized by National Council of La Raza Action Fund.

“We need to consistently take positive action towards that, electing officials that are going to be in support of clean air legislation,” said Gallego, D-Phoenix. “At the same time, we need to make sure that the Trump administration doesn’t roll back some of the advances that were made under President Obama.”

Gallego joined 236 U.S. mayors who opposed the administration’s proposed repeal of the plan, announced in March 2017, in a letter submitted Wednesday to the Environmental Protection Agency. He said Latinos and people of color are disproportionately affected by climate change. 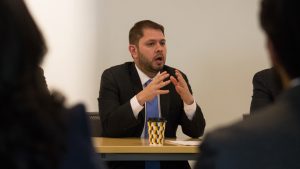 “As this place gets hotter, we’re going to have to spend more and more of our spendable money on air-conditioning,” Rep. Ruben Gallego said. (Photo by Miles Metke/Cronkite News)

“If we think about what is happening in the Valley, when we have an increase in the heat … Latinos are going to be the first to be impacted,” he said.

According to the National Council of La Raza, 90 percent of Latinos want the government to protect future generations from the dangers of climate change.

“As this place gets hotter, we’re going to have to spend more and more of our spendable money on air-conditioning,” Gallego said. “Unfortunately, as we know about the Latino community here, we are not of that situation where we can afford huge changes in terms of our disposable income.”